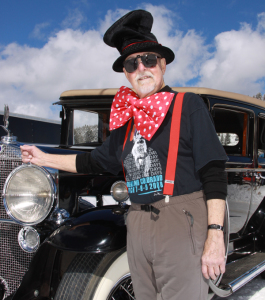 Nederland residents suffered an immeasurable loss November 15th with the passing of local legend Dave Felkley. From Frozen Dead Guy Days to Miners’ Days, and all the events before, after, or in between during the year, Dave Felkey was gladly present. Lending his golden voice, enthusiasm, and humor as master of ceremonies, Dave was an integral and treasured part of the community. Unremittingly approachable, he always had time to talk with his many friends and strangers alike. With only fond memories and a few photographs to remember him by, the resulting void is immense leaving empty shoes that can never be filled.

David George Felkley, 75, a long-time resident of Nederland, died peacefully at his son’s home in Boulder County on November 15th, 2014. Dave, also known as “BIGfoot”, will be fondly remembered as a great teacher and guide to all who knew him. An outgoing, big-hearted, non-conformist man, who lived life to the fullest and enjoyed many laughs and meaningful moments with his family and large circle of friends.

Dave was born in San Francisco to Margaret and Arthur Felkley. In 1953, his family moved to Catalina Island off the coast of Long Beach, where he attended Avalon High School. He was class and student body president, as well as valedictorian of the class of 1957. Dave joined the US Army and served from 1958-1960. Shortly thereafter, Dave started a family and worked in the beverage supply industry. Dave moved with his family to Colorado in the early 1970’s and worked as district sales manager for both Nissan and Mercedes Benz.

Ready for change and to start a new chapter of his life, Dave moved to Nederland Colorado in 1991, where he traded his car for his own two feet and later for a scooter. Dave became a local celebrity, announcing events and being an outdoor snowshoe guide and enthusiast. For many years he led snowshoe tours for people of all ages and also worked with Wild Bear outdoor school to share his love of the outdoors with young people. For the last decade he has also been Santa for the Nederland Holiday Market and around Nederland. Dave would also visit Boulder around the holidays in his Santa costume on his “RTD-sleigh” to visit his cancer doctors, nurses, and patients at the Rocky Mountain Cancer Center.

Dave is survived by his longtime girlfriend Nancy Kavanagh, his son Doug and wife Jean, his daughter Terri, his brother Don and wife Linda, his sister Deb and husband Rich, his grandchildren Maggie, David and Mack, and his two great-grandsons. Dave is also survived by his extended family of friends and the mountain trails he loved. In his 75 years, Dave loved people, nature, and every moment of the life he shared with us. Join us for a celebration of Dave’s life on December 14th, 12:00 p.m.-3:00 p.m., at the Nederland Community Center. In lieu of flowers, the family is requesting that donations be made to Wild Bear Mountain Ecology Center: PO Box 3017â€¨Nederland, Colorado 80466.

END_OF_DOCUMENT_TOKEN_TO_BE_REPLACED

Benefitting the county, schools, and much more By Don Ireland   This year marks the 30th anniversary of casinos opening in the former little mining towns of Black Hawk, Central City and Cripple Creek, Colorado. In those early years, smoking was allowed inside ... END_OF_DOCUMENT_TOKEN_TO_BE_REPLACED