“Dare to Soar” is motto of Gilpin’s new elementary principal 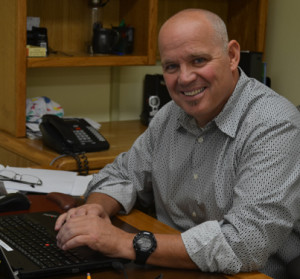 Gilpin County Elementary School’s new principal, Scott Eldred, is the type of leader who encourages others to strive to do their best. In my interview with Eldred on August 27, he emphasized this year’s theme: “Gilpin County Elementary – Where Teachers and Students Dare to Soar.” He urges students and teachers alike to take risks; in fact, his message to the teaching staff has been, “Life begins at the end of your comfort zone.”

It is easy to see that students come first with this jovial educator. When I arrived, Eldred grinned as he modeled his new “thinking cap” – a colorful tie-dyed bandanna designed for him by the Montessori class. A few minutes later, he departed briefly to help take care of a situation where a child had smashed a finger and needed comforting until the parent could arrive.

Eldred has been busy adjusting to his role as elementary principal. He was hired last May, and his contract began in July. Over the summer, he assisted in screening candidates for elementary teaching positions.

In giving his impressions of Gilpin so far, the principal reports that the elementary school has passionate, dedicated teachers and students who are eager to learn.

“The teachers are the best resource our kids have for learning,” Eldred asserts.

His goal is to monitor each child’s growth over the next several years, making sure each student is reaching his or her potential. He says it’s his responsibility to provide support and resources so teachers and students can do what they are best at.

He notes that the staff will return to teaching basic skills. Teachers at all grade levels will utilize common language when giving students feedback on reading, writing, and math.

“They’ll use common editing prompts at every grade level, for example, so students will have a consistent message in each grade,” Eldred says.

Each teacher is provided with data on every student that identifies the student’s strengths and needs. Then, Eldred states, individual, focused instruction is possible. If a child needs extra help in a subject, he or she will get additional support in the classroom.

Eldred explains that there are two teachers at each grade level. Whole group instruction is given by one teacher to students who are working at grade level in reading, math, and writing. Students who are struggling in these areas will receive help in a small group with a second teacher. Instead of being removed from the classroom and missing a lesson in order to get such help, those students will be able to work on needed skills while studying the same content the others are getting. Even with that, Eldred notes, some children will still need individual attention and can get that from a special education teacher, library teacher, or Eldred himself.

He was born and raised in Michigan, received his undergraduate degree from Ferris State University in that state, and began his teaching career in 1985. While in Michigan, he served as a teacher for over fifteen years in sixth through twelfth grade, both in special education and traditional classrooms.

In 1999, he earned two master’s degrees, one in educational leadership and one in special education, from Grand Valley State University in the Greater Grand Rapids area.

Eldred then made a transition into leadership roles, about the same time that he moved to Colorado.

He has held leadership positions in several districts in Colorado, in public school and in residential treatment settings. He has served in both rural and urban districts, including working as a K-12 administrator in Jefferson County. His most recent position was as an administrator with the East Grand School District (Winter Park), which is a similar scenario to Gilpin County School.

Eldred recalls, “East Grand had two elementary schools that were 22 miles apart, two middle schools, and one high school in the district.”

Interestingly, Eldred actually interviewed for a principal’s position at Gilpin when he moved to Colorado.

“It was the first place I looked,” he says. “Since then, I have waited for an opportunity to be here. I like the community aspect of K-12 on the same campus.”

Eldred is a proud husband and a father to two elementary-aged children. The Eldreds have lived in Golden for 14 years and plan to allow their children to complete elementary school there. At that time, they may possibly move to Gilpin County. They enjoy hiking, skiing, and any outdoor mountain activity.

“I’m very excited about the accepting attitudes of the parents and teachers and the support I have received from Superintendent MacKenzie and Secondary Principal Alexis Donaldson, as well as from the school board,” Eldred says appreciatively.

The most fun part of being a principal, he concludes, “is when kids drop in to my office. I love elementary age kids. They make me smile – even when there are colds and pinched fingers.”

END_OF_DOCUMENT_TOKEN_TO_BE_REPLACED

Where the dead get to tell their story By Jaclyn Schrock On Saturday, August 21, the Gilpin Historical Society held their annual Cemetery Crawl. Tickets allowed the shuttle of hundreds of guests from the Teller House parking lot to the Cemetery. Depending on v... END_OF_DOCUMENT_TOKEN_TO_BE_REPLACED

Benefitting the county, schools, and much more By Don Ireland   This year marks the 30th anniversary of casinos opening in the former little mining towns of Black Hawk, Central City and Cripple Creek, Colorado. In those early years, smoking was allowed inside ... END_OF_DOCUMENT_TOKEN_TO_BE_REPLACED