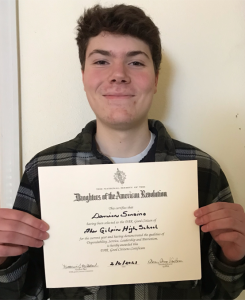 A 2021 Daughters of the American Revolution (DAR) Mountain Rendezvous Chapter, Good Citizens scholarship was awarded to Damian Sonsino, a senior at Gilpin High School. He is currently the valedictorian with a 4.3 GPA. His guidance counselor is Kim Cobb. The DAR scholarship is to encourage and reward the qualities of patriotism, leadership, dependability and service. The scholarship is open to any high school senior, male or female, who exhibits these qualities to an outstanding degree.

Damian has earned a place on the Honor Roll all four years and was inducted into the National Honor Society. He was recognized as a 2020 Colorado Outstanding Student and Academic All State.

Outside the classroom, Damian has participated in theater for four years, plays piano, trumpet, violin, and drums. He is on the basketball team, ski team, has lettered in varsity baseball, and is team captain of the Science Bowl.

In the community, Damian volunteers with the Dirty 30 Marathon, the Halloween Fair, the Homecoming Parade, and movie night for the elementary school.

Damian plans to earn a graduate degree in biochemistry and lead medical research in new directions.

DAR is a lineage-based membership organization for women who are directly descended from a person involved in the United States’ efforts towards independence. A non-profit group, DAR promotes historic preservation, education, and patriotism. DAR was created by an Act of Congress in 1896.