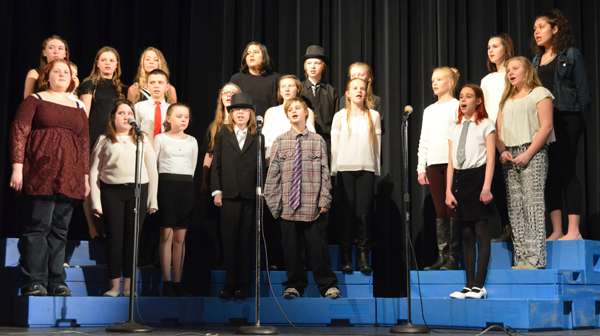 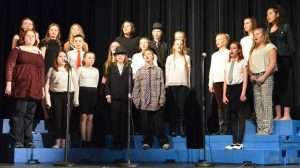 The 20-member band, composed mainly of middle school musicians, has shown much progress since their December concert. The group began the evening with “Sing, Sing, Sing,” followed by “Syncopated Rock.”

Small ensembles took the stage for the centerpiece of the band portion. Several short pieces showcased the talents of players on trombone, trumpet, French horn, flute, violin, cello, xylophone, saxophone, and clarinet. Each member of an ensemble was responsible for his or her own part.

“It took courage for the kids to perform in these small groups,” Ebers related. “They did it to help them build on the foundations they have been learning. It helped them put together their listening skills.”

The choir was made up of 23 students from grades six through twelve. Their version of the “Star Spangled Banner” was well received by the audience. The song “Clouds” got everyone “imagining the possibilities.” The singers shared their joy of music on “Bella Musica” – Beautiful Music, with its airy melody and catchy lyrics. Parents and grandparents harkened back to Simon and Garfunkel days with “The Sound of Silence.” The Spanish folk tune “De Colores” was festive and fun.

An impromptu rendition of “Happy Birthday” was inserted at this point, and the audience joined in musical best wishes to Leightner, the four-year-old brother of choir member Grace Peeples.

The choir gave a nod to Austria with the well-loved “Do-Re-Mi” from The Sound of Music, then performed a humorous finale with “Cheerleader.” The five young men of the chorus had the audience ROFL as the fellows preened to the lyrics: “Do you think I’m pretty? Do I make you feel like cheating? And I’m like no, not really, ‘cause oh, I think that I found myself a cheerleader. She is always right there when I need her.” 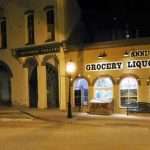 Central City steams ahead with acquisition
Next Article 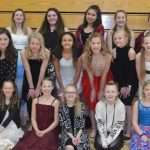