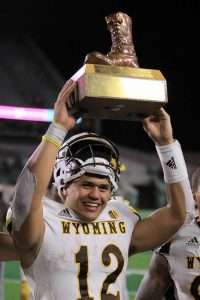 Battle for the Bronze Boot

In 1968 ROTC detachments from the CSU Rams and Wyoming Cowboys initiated the tradition of awarding the Bronze Boot trophy to the winner of the annual Border War football game between the two schools. The boot itself was worn in the Vietnam War during combat by CSU ROTC Commander CPT Dan J. Romero. A day before the contest each year, the game ball is shuttled 66 miles along US Hwy. 287 by cadet relay runners from the visiting team’s stadium to the home team’s. An exchange to the opposing team takes place at the Wyoming-Colorado border. For the last “Bronze Boot Mile” this year into Canvas Stadium in Fort Collins, the rest of the cadets, faculty, and fans showed their support by joining the runners while escorting the ball to the field.

Resembling trench warfare, both teams “dug in” defending their end zones doggedly for thirty minutes. The Rams had an opportunity to tie the score with a 53-yard field goal attempt to end the first half, but it sailed wide right. Score: Wyoming 3, CSU 0.

Offense made a comeback in the second half, but unfortunately for the Rams, it was mostly by the Cowboys. Twenty-one straight unanswered points were rattled off by Wyoming. The last TD of which was a 48-yard run by Mountain West leading rusher Nico Evans (28 carries, 176 yards on the day) where he was hit squarely in the chest and bounced off the defender to ramble another 40 yards for a score. The Rams ground attack was MIA totaling a paltry 20 yards for the entire game. CSU would score a touchdown on a 78-yard drive to end the 3rd quarter. A field goal by Wyoming and a CSU touchdown would bring the tally to 27-14 in favor of the Cowboys. With 7:39 remaining in the contest and victory still within reach needing two scores, Wyoming quashed that notion with a 43-yard TD pass from QB Sean Chambers to tight end Tyree Mayfield. Final score: Wyoming 34, CSU 21. CSU may have lost this battle but is winning the war leading the storied series 58-47-5.

Army troops as well as football squads rely heavily on teamwork in or on the field to achieve their objectives. Like any unit after a defeat, the Rams must mobilize, devise new strategies, and somehow bolster their arsenal before trying to recapture the Bronze Boot next year.

Dave Gibson has been a contributor at the Weekly Register–Call for thirteen years. To view past articles and pictures go to www.DavegibsonImages.com.

END_OF_DOCUMENT_TOKEN_TO_BE_REPLACED

Benefitting the county, schools, and much more By Don Ireland   This year marks the 30th anniversary of casinos opening in the former little mining towns of Black Hawk, Central City and Cripple Creek, Colorado. In those early years, smoking was allowed inside ... END_OF_DOCUMENT_TOKEN_TO_BE_REPLACED