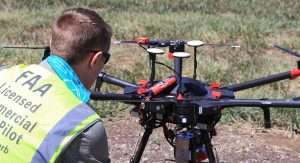 Attending college and working with drones is a reality for students enrolled at Colorado State University in Fort Collins. As the evolving, emerging field of drone technology continues to surge internationally, the CSU Drone Center offers students a flight plan into the future for the rapidly-growing, multi-billion-dollar drone industry.

“Drones are here to stay,” said Christopher Robertson, director of the CSU Drone Center, which will celebrate its third anniversary this summer. “Drones are not going away anywhere. They’re creating a whole new industry, a need and desire for skills and jobs. There will be a need for drone pilots, repair technicians, programmers, systems engineers, program administrators and mechanics. The landscape of aviation will change in the next 5 to 10 years because of unmanned aircraft.”

Robertson said the drone center, which is funded but CSU’s Office of the Vice President of Research and hosted by CSU’s College of Engineering, focuses on three main areas:

Those who take classes at the CSU Drone Center can train to obtain their FAA Part 107 certificate (required for all commercial sUAS pilots); hands-on training; opportunities for engineering, agricultural and natural resource majors learn to build and fly small unmanned aircraft, experience – including how to integrate sensors and electronic platforms into drones; building drones; working with drone-acquired data sets and flight training. The university doesn’t currently offer degrees for drones; they are included in the curriculum for other programs.

The center owns many styles and models of drones. They range from those that can be held in one hand to others that are more than a yard long. Some drones are the traditional quadcopter models, which have four or more propellers. There also are fixed-wing drones, which resemble model airplanes but include one or more propellers. Some drones weigh less than a pound while payload-carrying models exceed 30 pounds. “We offer internship opportunities, classroom support and projects for students, along with a variety of drones,” according to Robertson.

Although drones have been used for decades by the military, the era of using drones for business and industrial operations is relatively new. “It depends on what you need them for,” Robertson said. “One of the biggest things has been, for the average person with a limited amount of training, to access the dimension of flight. Once you see the world from a higher elevation and gain that bird’s-eye view, it gives you all kinds of ideas because manned aviation is inaccessible by the average person.” To the average person, having a drone equipped with a camera means they can photograph their house from the air or take aerial videos of their vacation.

Robertson, who was a sergeant with the Colorado State University Police Department for 20 years before stepping into his current position, said he saw the value and importance of using drones at his former job. As a member of the Larimer County Search and Rescue, Robertson and his colleagues were one of the first to use a drone to help find a missing person at Rocky Mountain National Park. “Drones can be put into service within minutes, while it could take hours to get a manned airplane or helicopter involved,” he said, noting many police and fire departments are incorporating drones into their operations.

Drones equipped with various devices can help monitor air pollution up to 400 feet above the ground. Others can determine the heat of a transformer mounted to a utility pole, potentially eliminating the need for someone to climb a ladder to accomplish the task. Similarly, a drone can provide close-up imagery of a tower or power lines, saving time and eliminating potential risks for a human-conducted physical inspection.

Construction companies are using drone photos to keep their staff informed on a project while also using them for supply planning and other factors related to a work site. Drone use for mapping and modeling also has been growing, according to Robertson.

Large companies, including Amazon, UPS and others, are experimenting with drone package deliveries in various places, domestically and overseas. The FAA recently changed some of its regulations, opening a potential path for future deliveries in the United States. “Will we see home deliveries by drones? I think we will but it will take a few years,” according to Robertson. He noted a Chinese company has developed a prototype flying taxi-type unmanned vehicle to transport people (think of a George Jetson-style flying car). “I don’t think many people here are ready for that yet,” he mused.

END_OF_DOCUMENT_TOKEN_TO_BE_REPLACED

Benefitting the county, schools, and much more By Don Ireland   This year marks the 30th anniversary of casinos opening in the former little mining towns of Black Hawk, Central City and Cripple Creek, Colorado. In those early years, smoking was allowed inside ... END_OF_DOCUMENT_TOKEN_TO_BE_REPLACED

Benefitting the county, schools, and much more By Don Ireland   This year marks the 30th anniversary of casinos opening in the former little mining towns of Black Hawk, Central City and Cripple Creek, Colorado. In those early years, smoking was allowed inside ... END_OF_DOCUMENT_TOKEN_TO_BE_REPLACED