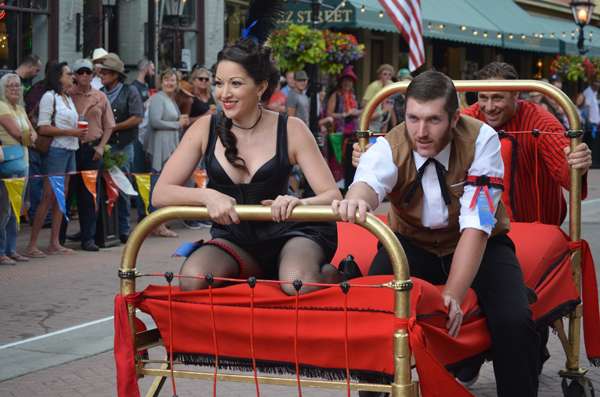 The sweetest set of wheels in town last Saturday was a flashy little red job. No, not a Corvette or a T-Bird. This racy two-seater boasted a set of springs that really handled those cobblestones and a comfy mattress that absorbed every bounce. The vehicle was totally open to the fresh air and came fully equipped with sturdy handles for pushing. No gas required.

What is this means of transport, you ask? None other than the official Central City brass bed used for the annual celebration of Lou Bunch Day.

On June 17, the historic mining town doffed its hat to this colorful madam from the rowdy days of the late 1800’s. The frivolity started at noon with the grand arrival of Sporting House Girls, Dandy Dans, and Victorian Highbrows. Live music by the Jewell in the Rough band, an Old West Show by Central City’s Wild Bunch, and the Sporting House Girls’ Revue preceded the famous parade and brass bed races down Main Street. A Madam’s and Miner’s Ball followed, and the day climaxed with competitions for Madam, Sporting House Girl, and Dandy Dan of the year.

Lou Bunch Day was sponsored by Central City Local Events. Every person who put on the day’s entertainment was a volunteer, noted coordinator and Central City Council member Shirley Voorhies.

Sandra Hines, aka Naughty Noel, emceed. She was proud to announce that Lou Bunch Day had been voted by Denver’s weekly newspaper Westword as “the most unique mountain event.”

Madam Lou was chaperoning eight of her Sporting House Girls. Sierra Rhodd as Porcia Hot Rod and Kelsey Casias as Bambi Rue were Gilpin High School alumni from several years back. The girls treated the crowd to a burlesque show, tossing novelty party necklaces into the crowd while they performed.

After the short processional, it was time for the much-anticipated brass bed racing. Hundreds of eager spectators whipped out their cameras and phones and lined the street to cheer for their favorite teams. Each team was comprised of one guy and one doll riding and another guy pushing the wheeled bed. The teams were timed as they hurtled down Main Street, rounded a barrel, and halted to quickly switch the “pusher” and the “pushee.” The men also had to trade wearing a nightshirt before starting back up the street.

Emcee Hines gave the crowd repeated friendly warnings to stay off the street and behind the yellow caution tape for safety’s sake. She wasn’t kidding – the bed was a bit unwieldy and veered pretty near the crowd a few times.

The teams were full of spirit and enthusiasm, whooping and raising confident fists as they flew along. When the dust settled, the 43rd Annual Lou Bunch Day winning team was O’Danny Boy Builders of Arvada, with Blue Frog of Toronto, Canada. They came in with a time of one minute 7 seconds, a $300 cash prize, and the trophy. The complete winners list appears at the end of this article.

The crowd loved it. “So fun … hilarious … we come every year … it captures the spirit of Central City,” were a few of the comments.

Among the many locals and visitors was a pair about to join in matrimony. James Schick and Jenny Newtson were exchanging vows that evening at the Failing Mansion on Casey Street in Central City, the home of Gilpin County Clerk Colleen Stewart. Stewart had the privilege of issuing the marriage license to Schick, who is her godson. County Commissioner Ron Engels was to officiate.

After the excitement of the races, locals and visitors refreshed themselves with mouth-watering barbecue or brats from JKQ BBQ and the Century Casino.

Hines continued the entertainment with a recitation of the pedigrees of all the Dandy Dans and Sporting House Girls as a precursor to the Madam’s and Miner’s Ball. The girls included Bambi Rue, Rogue Dolly, Lady Mimi, Foxy Moxy, and several others. Before turning to the oldest profession, they had supposedly been Canadian expedition guides, circus entertainers, midwives, and gold seekers.

The madams had all had houses in Central City: Cracklin’ Jaclyn Brown, Jeannie Mae, Fiona Firestarter, and of course, Madam Lou herself.

The Dandy Dans were the muscle behind the girls and saw to it that they were well taken care of. Gentleman Jeremy, Doc Young, Union Jack, Six-Shooter Steve, and others strutted their stuff with the Sporting House Girls on their arms.

Hines honored two individuals who had given many years of support. Barbara Thielemann was named the All-Time Honorary Madam, and Dan Hamilton was selected as the All-Time Dandy Dan.

Lou Bunch Day began in the 1970’s, when much of Duchess and the Dirtwater Fox, a Western romantic comedy starring Goldie Hawn and George Segal, was filmed in Central City. Hawn, the original Sporting House Girl, began the tradition that carries on today with the same scarlet-covered bed.

Lou Bunch was the last operating madam in Central City, running her house of ill repute on Pine Street. In addition to the “services” she provided, she is remembered for turning her house into a temporary hospital for the miners when a tuberculosis epidemic broke out in Central City.

END_OF_DOCUMENT_TOKEN_TO_BE_REPLACED

Benefitting the county, schools, and much more By Don Ireland   This year marks the 30th anniversary of casinos opening in the former little mining towns of Black Hawk, Central City and Cripple Creek, Colorado. In those early years, smoking was allowed inside ... END_OF_DOCUMENT_TOKEN_TO_BE_REPLACED