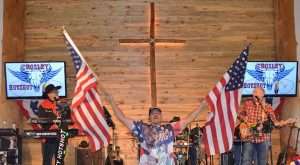 Members of Christ the King Community Church mingled with members of the community and guests from the metro area on July 2 for a joyous celebration of the Fourth of July and our nation’s freedom. Men, women, teens, children, and dogs gathered at the church to enjoy a day of music, a barbecue and potluck, and fun for all. The dynamic band Crosley Hotshot entertained with two sets of patriotic and country songs.

In spite of clouds that threatened rain and then made good on the threat, the free event drew about a hundred attendees, who kicked things off with a bounce house, piñata, and yard games for children and teens. Independence Day was acknowledged with scores of American flags that decorated the church sanctuary, driveway, and parking lot.

The Crosley Hotshot band, who appeared at the church’s first such event last year, were so impressive that they were invited back again. In turn, the band declared that of all the places they have placed in Colorado – usually at fairs and other public events or at bars – they like the church the best because of the enthusiastic crowd.

They got everyone invigorated with their brand of Southern country on such tunes as “Radio Flyer” and the oldie but goodie, “Ghost Riders in the Sky.” The band members were Andy Fontana on lead guitar and vocals, David Sayer on keyboard and vocals, Dan Hoskins on rhythm guitar and vocals, Kenny Hicks on bass, Johnny Brewington on drums, and Larry Robertson on pedal steel. Next up on their tour schedule was the Greeley Stampede on July 4.

At noon, hungry guests lined up for burgers and brats supplied by the church and a host of potluck side dishes. The grills were kept busy throughout the day cooking up over a hundred burgers and an equal number of bratwurst. Salads, bean dishes, desserts, and even homemade ice cream rounded out the buffet style meal. There was seating inside at tables in the sanctuary and outside under much-needed canopies. Folks in their denims and red, white, and blue visited with old friends and met new ones over their laden plates.

A stunning afghan in an American flag design, crafted by church member Kathi Beaudette, was raffled off and the proceeds donated to the church.

The day wrapped up with a second set by the six band members, who gave special appreciation to members of the armed services and to veterans.

“If you are a veteran, come see us after the show and we’ve got a CD for you,” lead singer Andy Fontana said.

The band finished with an anthem of thanks honoring the military, “Sing Freedom’s Song.” The lyrics reminded hearers to appreciate our service men and women and to remember our flag and what it stands for. The song definitely struck a chord with the audience, who nodded and applauded in pride and agreement.

“American flag, your colors rise above the land, and firm and majestic you stand. American flag, our hope that keeps us keeping on, reminds us to sing freedom’s song.”

The band’s website is www.crosleyhotshot.com, where their music and videos may be seen and heard.

Christ the King Community Church is located at 971 Highway 46 across from the Gilpin County Fairgrounds.

END_OF_DOCUMENT_TOKEN_TO_BE_REPLACED

Benefitting the county, schools, and much more By Don Ireland   This year marks the 30th anniversary of casinos opening in the former little mining towns of Black Hawk, Central City and Cripple Creek, Colorado. In those early years, smoking was allowed inside ... END_OF_DOCUMENT_TOKEN_TO_BE_REPLACED