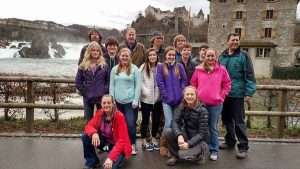 An adventurous group of Gilpin High School students and their adult chaperons took part in a tour of several European countries during their spring break March 19-30. Each spring, the school’s Foreign Travel Group explores a different part of the world. This year’s tour included Germany, Austria, Liechtenstein, and Switzerland.

A primary goal of each trip is to become immersed in the new culture. Toward that end, each of the kids was assigned to research one of the places the group was going to see. After breakfast each morning, the students shared their research, so everyone learned some background about what they would be seeing.

The group maintained an intense schedule during their short journey. They arrived in Vienna, Austria, after more than 30 hours of travel and immediately began with a walking tour of the city.

“We didn’t stop ‘running’ the whole time. We were up early every day and didn’t have dinner until after 7:00 each night,” said chaperone Kellie Bayne. “The weather was chilly and rainy on most of the trip, but every day was filled with new experiences and lots of fun.”

The group’s tour guide, also named Lukas, was from Berlin, Germany, and the bus driver, Voltan, was from Hungary. The Gilpin group was joined by two groups from schools in Florida, so the total entourage numbered 53.

“Our guide, Lukas, did a very good job of using history to help us look at the area from a different perspective,” Bayne noted. Rather than a dry recitation of dates, Lukas engaged the group with memorable stories about real people from history, such as King Ludwig II, Mark Twain, and opera composer Richard Wagner.

Lukas read to the group from several passages of Mark Twain’s book, A Tramp Abroad, to help the travelers gain more of an understanding of the areas they visited. Published in 1860, the book is the story of Twain’s travels through much of the same area that the Gilpin students visited. Lukas also gave a lot of history surrounding the kings of Bavaria and related the places the group was seeing to those kings.

The group got some exercise with walking tours in each town they visited. Bayne related a number of highlights from these tours.

The first stop was in Vienna, with its inspiring artwork, cathedrals, and palaces, plus a delicious sampling of “der wiener schnitzel.”

Salzburg, Austria, which means “salt fortress,” was the site of a tour inside a salt mine. Treasures of Austrian artwork and jewelry were hidden in the temperature-controlled mines during World War II, the group learned.

The students had a somber visit to the Dachau concentration camp northwest of Munich, Germany. They followed that meaningful experience on a more lighthearted note as they met an old friend, Julie Blum, for a bicycle tour of Munich. Julie was Gilpin’s foreign exchange student from Germany last year. The tour finished up at the BMW/Mini Cooper factory showroom.

Next stop was the magnificent Neuschwanstein Castle in southwest Bavaria, one of King Ludwig’s palaces. From there, the group traveled to beautiful Innsbruck and visited the Renaissance castle of Ambras, viewing the large collection of armor, paintings, and items of value back in the day, such as coconuts.

Then, it was a short hop to the tiny country of Liechtenstein. Smaller than even Gilpin County, it is run by a prince. When he’s home, the flag is up at the castle.

The group’s only full day of sunshine was during a jaunt to the top of Mt. Pilatus overlooking Lucerne, Switzerland. The gondola ride to the top was unique. “We took a four-person gondola up a little over halfway,” Bayne said. “From there, we transferred to a gondola that held 55. On top, we were at about 6,700 feet.” Because the weather cooperated, they were blessed with a panoramic view of the Alps.

Another Swiss highlight was breathtaking Rhine Falls, the largest in Switzerland, yet smaller than Niagara Falls.

The group would have come at this point, but the school board and Superintendent MacKenzie allowed a two-day extension and three days off from school so the travelers could take a cruise on the Rhine River, visit the medieval Marksburg Castle, and tour Cologne, Germany.

On the last day, the globetrotters had the privilege of seeing Cologne Cathedral. The twin spires of the Gothic structure tower over the other buildings in the city, which is perhaps Germany’s most-visited landmark. Bayne shared that the cathedral was the only building that was not destroyed when Allies bombed the city during World War II.

The group enjoyed connecting with another former exchange student, Daria Simon, in Cologne, and finished the tour with a sweet trip to the Lindt Chocolate Museum. Of course, it ended with a bunch of chocolate being purchased!

The only apparent down side to the trip – if there was one – was “castle overload” by the journey’s end. However, the students focused on their favorite moments: ascending Mt. Pilatus, cruising the Rhine River, taking walking tours of all the towns, exploring on their own during free time, and seeing what cultures are like in other countries.

Since the writings of Mark Twain helped the students gain a new perspective, we’ll close with an appropriate quote from the famous author: “So throw off the bowlines, sail away from the safe harbor. Catch the trade winds in your sails. Explore. Dream. Discover.”

It appears that Gilpin’s Foreign Travel Group did just that.

END_OF_DOCUMENT_TOKEN_TO_BE_REPLACED

Where the dead get to tell their story By Jaclyn Schrock On Saturday, August 21, the Gilpin Historical Society held their annual Cemetery Crawl. Tickets allowed the shuttle of hundreds of guests from the Teller House parking lot to the Cemetery. Depending on v... END_OF_DOCUMENT_TOKEN_TO_BE_REPLACED