Construction and recreation in Central City 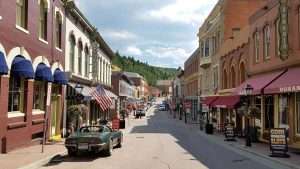 Council to hatch new businesses in the Visitor’s Center

The Mayor called for a motion to approve the consent agenda which consisted of the minutes from the July 2 meeting and regular bill lists through June 25. Alderman Aiken moved to approve the Consent Agenda and was seconded by Alderwoman Laratta. The motion passed unanimously.

Alderwoman Laratta moved to accept the 2018 Audited Financial Statements and was seconded by Alderman Aiken. The motion passed unanimously.

A Promise of Future Success

The Council considered a request from Rachel Schmalz for the Promise Program for the 2019/20 school year. This will be Rachel’s third year at Hastings College in Nebraska majoring in Political Science and History. Rachel is achieving academic success making it on the Dean’s List and was inducted to Pi Sigma Alpha, a National Political Science Honorary.

Alderman Aiken moved to approve the request for the Promise Program and was seconded by Alderman Hidahl. The motion passed unanimously.

Director Rears introduced Resolution 19-17 which approves the proposed Comprehensive Plan and Strategic Plan and supports the City’s Colorado Parks and Wildlife Colorado The Beautiful grant application for the Trails Master Plan. The Comprehensive Plan changes outlines three goals: to capitalize on heritage and cultural assets to attract visitors and enrich the visitor experience; to make targeted investments in outdoor recreations; and to expand outdoor recreation opportunities. The Strategic Plan address changes to infrastructure to support recreation.

Alderwoman Laratta moved to approve Resolution 19-17 and was seconded by Alderman Aiken. The Resolution passed unanimously.

Director Hoover introduced Resolution 19-18 which would approve a change order for the Central City Spring Street Rehabilitation project. The change order, which has been approved by the City Engineer, would have the contractor add a two-inch mill and overlay to Lawrence Street from Spring Street to D Street. The funding for the change is in the 2019 Budget and would leave $28,000 in the budget line item for other transportation projects.

Alderman Aiken moved to approve Resolution 19-18 and was seconded by Alderwoman Laratta. The Resolution passed unanimously.

Hatching Business in the Visitors Center

Director Rears introduced Resolution 19-19 which would authorize the City Manager to enter into License Agreements with a new business to utilize a portion of the Visitors Center as a start-up incubator. New businesses would be required to pay a deposit of $2,000 and can remain in the Visitors Center for a maximum of 15 months. The City would collect four percent of administrative and maintenance costs during that time. Historically, the Gilpin Arts Association has utilized the space as a secondary year-round gallery, but they gave up the use of that space in 2018 to focus on their main gallery at Washington Hall.

Alderman Aiken moved to approve Resolution 19-19 and was seconded by Alderwoman Laratta. The Resolution passed unanimously.

City Clerk Bechtel introduced Resolution 19-20 which would call for a special election to be held as a coordinated election and delegate authority to the Mayor to approve an Intergovernmental Agreement (IGA) between Gilpin County and the City of Central regarding the conduct of the Tuesday, November 5, 2019 coordinated election. The Special Election will ask City voters whether sports betting shall be authorized within designated portions of the City and will be held concurrently with the statewide election on the same day.

Alderman Aiken moved to approved Resolution 19-20 and was seconded by Alderwoman Laratta. The Resolution passed unanimously.

Manager Miera reported that the scope of work for the Hometown Colorado University of Colorado Denver program has changed to the Masonic Lodge.

Alderman Aiken publicly thanked Finance Director Robbins for her work on the audit.

Mayor Fey adjourned the meeting at 8:26 p.m. The next regular Council Meeting has been cancelled, and so the next meeting will be Tuesday, August 20, 2019.

END_OF_DOCUMENT_TOKEN_TO_BE_REPLACED

Where the dead get to tell their story By Jaclyn Schrock On Saturday, August 21, the Gilpin Historical Society held their annual Cemetery Crawl. Tickets allowed the shuttle of hundreds of guests from the Teller House parking lot to the Cemetery. Depending on v... END_OF_DOCUMENT_TOKEN_TO_BE_REPLACED