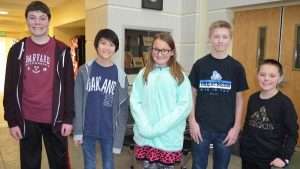 Gilpin County School held its annual spelling bee last Thursday, January 19, in the school auditorium. Eighth-grader Damien Sonsino defeated a field of 101 students in fourth through eighth grade to capture the school’s 2017 championship and the $100 first prize. Damien, a civil young man, won the champ’s title when he correctly spelled “churlish,” meaning “rude.” He is eligible to compete in the state spelling bee if he chooses to do so. Damien also won first in 2014 and 2015.

All students won one dollar for each correctly spelled word. Prize money was donated by the Gilpin County Commissioners and the City of Central.

Carol Murray, secondary school secretary, organized the bee for the tenth year in a row. Secondary school language arts teacher Jeff Schuessler filled the role of pronouncer, or the one who gave the students the words. He has done so for more than ten years. Judges were Michelle Welch, district administrative assistant, Abigail Adame from the City of Central administration department, and Andy Rothenberger, school technology coordinator.

The students were provided last September with a list of around 250 words to study, taken from the Scripps Spelling Bee website. The bee was conducted according to the Scripps’ Rules for Local Spelling Bees. The competition is administered by the E.W. Scripps Company with the purpose of helping students improve spelling, increase vocabulary, learn concepts, and develop correct English usage.

Schuessler explained the rules to the students, who warmed up with a practice round by spelling their own names into a microphone. Height varies widely in students aged nine through 14, so the mic got a workout as boys and girls tugged it up or nudged it down. Each contestant was encouraged to face the judges and speak clearly.

During the contest, the judges were to uphold the rules and determine whether or not words were spelled correctly. If a speller needed clarification on a word, they were permitted to ask the pronouncer to repeat a word, define it, or give it in a sentence. They were then to say the word, spell it, and say it again, although there was no penalty if they forgot to say the word.

Round one began, appropriately enough, with the word “start” and progressed through words of moderate difficulty, such as “picky,” “leaky,” “hungry,” “shrill,” and “snoozing.” Some words had homonyms; in those cases, the pronouncer gave the part of speech and a definition. Those spelling their words correctly reacted with a smile, a fist pump, or a sigh of relief. If a child spelled their word incorrectly, he or she traipsed off the stage with a shake of the head. 32 children were spelled down in this round.

The second round immediately got more “arduous,” with words like “hiccups” (or “hiccoughs”), “oblivious,” “reggae,” “derelict,” and “prosthetic.” Many of the pupils looked up or around the room in an attempt to visualize their words, or perhaps they were hoping to see handwriting on the wall or on the ceiling. Unfortunately, no such luck. Most of the kids at least took a phonetic stab at it, but 55 went down, and only 13 students were left to start round three.

The first word was “alpinist,” meaning “a mountain climber specializing in high, difficult climbs.” Of course, living at altitude, the student being tested on that word spelled it correctly. However, even with a “prodigious” effort by all, there were only five students left to start round four – Damien, Shane, Skylar, Braden, and Colton.

Damien and Shane persisted through round five, correctly spelling “ascetic” and “decrepitude.” In round six, Damien spelled “tetanus,” but Shane left off the last “l” on “mandrill.” Damien was then given the anticipated championship word: “churlish,” which he spelled correctly, to become the 2017 Gilpin spelling bee winner.

Anyone for some alphabet soup for lunch?

END_OF_DOCUMENT_TOKEN_TO_BE_REPLACED

Where the dead get to tell their story By Jaclyn Schrock On Saturday, August 21, the Gilpin Historical Society held their annual Cemetery Crawl. Tickets allowed the shuttle of hundreds of guests from the Teller House parking lot to the Cemetery. Depending on v... END_OF_DOCUMENT_TOKEN_TO_BE_REPLACED

Benefitting the county, schools, and much more By Don Ireland   This year marks the 30th anniversary of casinos opening in the former little mining towns of Black Hawk, Central City and Cripple Creek, Colorado. In those early years, smoking was allowed inside ... END_OF_DOCUMENT_TOKEN_TO_BE_REPLACED