Communion jazz quintet expresses “who I am” 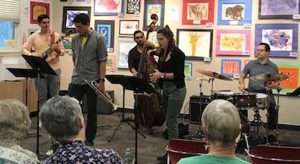 We love our jazz in Gilpin County. The Central City Jazz Festival in June hosted two dancin’-in-the-street days of spirited New Orleans funk and liberated jamming. By contrast, the jazz ensemble Communion who performed at the Gilpin Library on July 31 is on a different musical evolutionary path.

The five graduate students from CU played five original compositions. Their charts have a similar structure: first, the singable, legato tunes were laid out in trumpet/sax duets. Then came the solos in order: tpt, sax, guitar, bass, and drums. (Here, original composition gave way to improvisation; one could not be certain where written notes gave way to flights of creativity.) A satisfying return to the first melodies provided the conclusion to each number.

The tunes were traditional 16-bar choruses, duple 4/4 counts. The solos, with the growing intensity of an approaching freight train, built to excruciating excitement and continued until the soloist had exhausted his/her material and nodded for the next to take over, as if to say, “who is counting – I’m done, your turn.”

Trumpeter Joey Blunk led the group, with his joined-at-the-hip-sidekick Rhiannon Dewey on sax, playing the melodies together in thirds and sixths, and occasionally other more dissonant intervals. The horn tone was bright, with ringing laser-true top notes, while the reedy full-toned tenor saxophone provided rich, deep underpinning, tempering the intense sound of the trumpet in the duets.

Adam Hernandez on guitar provided the harmonic heavy-lifting. Adam is versatile, sometimes playing melody, and other times ‘comping’ to provide the only harmonies we get from this group. Rhythmically poking in added-note, non-functional short-chords, he repeated fragments of melody, or a single chord or note, often rising in parallel motion, Debussyan, with increasingly frenetic energy.

Leo Augüello on bass riffed and soared as a soloist. Rarely the pulse-keeper or provider of roots of chords, he brought out a pleasing sound of finger-flesh on gut-string, and maneuvered from pitch to pitch up and down the belly of the instrument like a force of nature.

The driver and glue of the group was Michael D’Angelo on drums. He assumed the foundational task of keeping time. With constantly moving dexterous hands and feet, his incessant energy never flagged: ceaseless, unrelenting, fast. His effort was multi-leveled, with coloristic effects: the bass drum pitch sounded so clearly it might have been another note rather than a hit, and the cymbals brought playful surprises. Occasionally he lifted his face as if for creative inspiration, then brought forth renewed layers of complex textures with his sticks and wire brushes.

All members are soloists, and when they played together we heard multi-layered Impressionistic polyphonic textures. Leo is from Costa Rica, Adam on guitar is from Miami, and one detected a hint of Latin-inspired harmonies. There was balance in the layers: intensity with smoothness, energizing with release, frenetic in an organized way.

Rhiannon Dewey is the female force in the group – mellow as her sax, beautiful as her soulful melodies, playing with hard driving competent strength. Her composition entitled 29 April was a highlight, and it was the tune we walked out humming.

Joey’s culinary fetishes inspired two of his compositions, Baby Carrots and Guacamole. The audience responded enthusiastically to Joey’s composition Wolf, a musical depiction of the Wolf from the Three Pigs as a laid-back cool dude. Beginning with a 6-tone fragment from the bass, repeated as if something was approaching, it featured menacing descending ½ steps, the melody layer in stark 4ths, and a brief (and the only) digression into Swing style.

Michael the drummer expressed his (needless) concern that the audience might not respond to the group, since the music was an expression of their inner life and a personal communication. “Jazz takes courage,” he said. “It is about expression, who I am.” And I say to him, “this is the way I feel, also.” I left energized. My heart was pounding but my brain was clear. This is a way forward. There is hope.

This performance was the final concert in the 2019 Summer Concert Series, profiting from the rich resources and talents of advanced musicians studying and teaching at CU in Boulder. Thanks to our librarian Michael Carlson for spearheading what we hope is the first of many such seasons and series to come.

END_OF_DOCUMENT_TOKEN_TO_BE_REPLACED

Where the dead get to tell their story By Jaclyn Schrock On Saturday, August 21, the Gilpin Historical Society held their annual Cemetery Crawl. Tickets allowed the shuttle of hundreds of guests from the Teller House parking lot to the Cemetery. Depending on v... END_OF_DOCUMENT_TOKEN_TO_BE_REPLACED