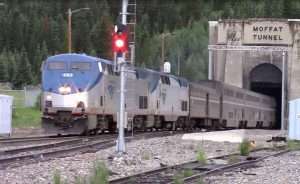 Gilpin County Board of County Commissioners (BoCC) regular meeting got under way promptly at 9:02 am on Tuesday on July 24, 2018 chaired by Commissioner Ron Engels, along with Commissioners Linda Isenhart and Gail Watson. Also present was County Attorney Jim Petrock, and Deputy Clerk to the Board Sharon Cate.

There was one addition to the agenda that concerns the After School Program at the Community Center.

Colorado Extension Director Irene Shonle presented an agenda item to increase the County’s contribution to the Mitigation Grant Program. The grant which is used to create defensible space is sponsored in part the Colorado State Forest Service and Gilpin County. The increase in participation has expended all the program’s current funds. The Gilpin County Commissioners approved an additional $10,000 in funds. These funds will only be expended if additional homeowners sign up for the Defensible Space Mitigation Grant. All the current participants are covered under the previous funding effort.

Chief Deputy Treasurer Mary Lorenz presented two items to the Commissioners. One being the June 2018 Report, the other was the Semi-Annual Report for those months from January 2018 to June 2018. The report shows strong numbers for the month of June with grand total of $14.9 million dollars, up from last year’s grand total of $14.3 million. Taxes collected have taken a slight decrease though. Last year’s percentage was 96.89% as opposed to 2018’ percentage of 98.79%. Gilpin Commissioners accepted the reports with no changes.

Gilpin County Chief Deputy Clerk Gail Maxwell reports the month of June is typically a busy time of the year Recorder’s office with folks buying new cars, property and other big ticket items. In June the Recorder’s Office took in a little over $94,000 in license fees and $31,000 plus in sales tax in comparison with the May totals of $79,600 in license fees and $14,600 in sales tax. Ms. Maxwell also noted the Colorado Department of Motor Vehicles (DMV) will shut down August 1st thru August 3rd for systems upgrades. Everything will be up and running on August 5th. Those folks that have plates or temp plates that are due during that time are encouraged to visit the Clerk and Recorder’s office on July 31st. Gilpin County Sheriff Bruce Hartman weighed in when asked what would the deputies do if a vehicle is pulled over with expired tags? He replied,” It will be up to the deputy’s discretion as to ticket or tow a vehicle with expired plates.” On another note, Ms. Maxwell would like to encourage Gilpin County residents to utilize the various Ballot Drop off Boxes located throughout the county in lieu of sending the ballot through the US Mail in the upcoming election. Twenty six ballots were not counted in the last election because they arrived at the Recorder’s after the deadline of the election.

Gilpin County Historical Preservation Advisory Commission (HAC) Secretary Tami Archer Presented a Potential Stay of Proposed Work that will replace the roof on the head building at the Moffat Tunnel. The replacement of the roof is not enough to require an HAC review, but subsequent submissions revealed that Union Pacific planned to do much more than just replace the roof; they had included repair and waterproofing to the existing stone and concrete walls also. These actions do require the Historical Advisory Commission to weigh in on the permitting process. After further review, by the HAC, it was decided to reject the application as incomplete and require Union Pacific to provide communication with the State of Colorado granting them approval to move forward with the roof replacement. After an evaluation it was found that the existing roof does not appear to be historic. Alterations to the roof, if performed carefully, should not impact the historical eligibility of the Moffat Tunnel. The board-formed concrete walls are historic and are character-defining features of the Moffat Tunnel. Ms. Archer revealed that on the morning of July 24th, she received an e-mail from the State agency stating that the Federal Railroad Administration (FRA) must review this application permit for approval. The State or the County can weigh in on the issue, but FRA has the final decision. Colorado Department of Local Affairs (DOLA) actually owns this building, but as of Tuesday afternoon, there has been no word from the DOLA representative. This agenda item went from a Stay of Proposed Work to an informational item due to the Federal Railroad Administration involvement.

Gilpin County Community Center Director Kyle Benedict presented a draft copy of the After School Program registration form. Currently the After School Program has been available to Gilpin County school kids from grades K-6th grades. The new program will include teens from 12 to 17. Mr. Benedict presented a new registration form that includes a Personal Release Statement, Code of Conduct, and structured program outline. This draft copy is an informational item and did not require approval from the Commissioners. The final copy will be approved in the future following a review by the County Attorney.

Sheriff Bruce Hartman announced that on Wednesday July 25th at noon the Stage 2 Fire Ban will be downgraded to a Stage 1 Fire Ban. Stage 1 Fire Restrictions are as follows:

​–NO building, maintaining, attending, or using a fire, campfire, or stove fire* without a permit EXCEPT in a developed camp or picnic ground. The following actions ARE permitted: petroleum-fueled stoves, lanterns, or heating devices providing such devices meet the fire underwriters’ specifications for safety.

—NO smoking unless in an enclosed vehicle or building, a developed recreation site, or while stopped in an area at least three feet in diameter that is barren or cleared of all flammable material.

—NO operation of welding, acetylene, or other torches with an open flame.

—NO operating or using any internal or external combustion engine without a spark arresting device properly installed, maintained, and in effective working order.

—Persons with a permit specifically authorizing the prohibited act or omission.

—Any Federal, State or Local Officer or member of an organized firefighting force in the performance of an official duty.

*A stove fire is defined as a campfire built inside an enclosed stove or grill, portable brazier, or a pressurized liquid or gas stove, including a space-heating device.

The next Gilpin County Board of Commissioners meeting will be Thursday August 2, 2018, at 9:00 am at the historic Gilpin County Courthouse, 203 Eureka St, Central City Colorado. For this and any othe information on Gilpin County business or department, visit http://www.co.gilpin.co.us.

END_OF_DOCUMENT_TOKEN_TO_BE_REPLACED

Benefitting the county, schools, and much more By Don Ireland   This year marks the 30th anniversary of casinos opening in the former little mining towns of Black Hawk, Central City and Cripple Creek, Colorado. In those early years, smoking was allowed inside ... END_OF_DOCUMENT_TOKEN_TO_BE_REPLACED