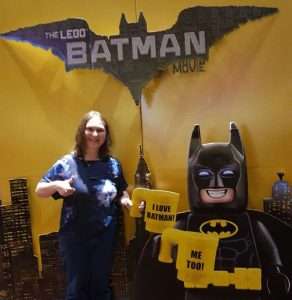 The overwhelming success of “The LEGO Movie” in 2014 that pleased adults and kids alike, naturally leads to more LEGO movies in the box. “The LEGO Batman Movie” is the first to be released, but does it hold up to the quality of the soon-to-be LEGO franchise?

Set in the DC Comics Batman universe, we find a very egotistic Batman valiantly fending off relationships; friends, girlfriends, and family. Batman, you see, does better on his own and others just throw him off his groove. In an early confrontation with the Joker, Batman causes the jokester to cry by not admitting that the Joker is his greatest enemy. To prove otherwise, the Joker sets free a cadre of criminals from Batman’s colorful past: the Penguin, Mr. Freeze, the Condiment King (yep, he’s real), and many, many more. Meanwhile, Batman traipses through crowds of cheering fans giving high-fives and praising himself on his way back to the bat cave. One fan is heard to say, “It must be great to be Batman. I can only imagine he’s going home to party the night away.” And Batman does…alone. Other than doting Alfred, his butler and stand-in father, Batman converses with an old picture of young Bruce and his parents. “Hey mom, hey dad, I, uh, saved the city again today. I wish you could have seen me. I think you would have been pleased.” As Batman tries to save Gotham City from villainy set free by the Joker, he “accidentally” adopts Dick Grayson who is cheerfully adamant about helping; along with Barbara Gordon and Alfred. Along the way, Batman learns to confront his greatest fear; the pain of losing someone he is close to.

This movie is riddled with jokes. Jokes that make fun of comic book movies, jokes about the entirety of the Batman franchise, jokes about how bad “Batman v Superman: Dawn of Justice” is, jokes about pop culture, inside jokes you have to dig deep into trivia to get, and jokes related to the fact they are in fact, LEGOs. The movie made me laugh a lot and even applaud. I walked out of the theater with a smile on my face.

There is a strong theme of friendship and family with an overarching message that although they may cramp your personal style, your friends and family help make you a better person. When the Joker turns to other measures to release a viler hoard never before seen in Batman comics, Batman finds value in working with the criminals set free instead of distancing himself completely. Ultimately, the words the Joker is looking for, “You are my greatest enemy,” is really meant to be a term of endearment. If and when Batman utters those words, it will mean that the Joker is truly part of his life and that Batman can’t be Batman without him.

The song choices used in this movie set the mood and told part of the story perfectly.

Unlike “The LEGO Movie,” this one throws way too much at the audience too fast. It is fast-paced like a comic book movie which means you don’t have much time for character development. Some of the characters faced intense peril, but it didn’t really matter, because I didn’t have time to feel a connection to them.

Among the many jokes thrown around were those that I do not appreciate. The basest bathroom humor jokes also permeated the entire film. Just not my cup of tea.

“The LEGO Batman Movie” is rated PG for crude humor and some comic book action. I’m sure it’s fine for most children; however, in the theater with me was a girl about three or four years old and the movie did not hold her interest. As an adult, I realized that my enjoyment came mostly from the inside jokes rather than the plot. In reality, the story was really cheesy and this will never be a classic you want to watch 10 or 20 years from now. Nevertheless, it is a good movie worth watching at least once. I rate the film four out of five wingardium leviosas (hmm…what’s that about?).

END_OF_DOCUMENT_TOKEN_TO_BE_REPLACED

Where the dead get to tell their story By Jaclyn Schrock On Saturday, August 21, the Gilpin Historical Society held their annual Cemetery Crawl. Tickets allowed the shuttle of hundreds of guests from the Teller House parking lot to the Cemetery. Depending on v... END_OF_DOCUMENT_TOKEN_TO_BE_REPLACED