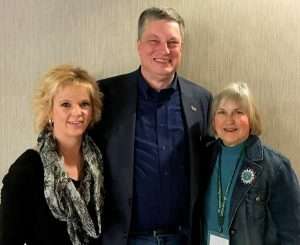 Colorado’s county clerks are bracing for major changes this year, from mailing primary ballots to unaffiliated voters for the first time ever to revamping the Motor Vehicle operations their offices handle.

To prepare for 2018, the Colorado County Clerks Association at its winter conference in Colorado Springs last week offered workshops dealing with duties that most clerks handle, including recording documents, issuing license plates and running elections.

“We need to thank the Secretary of State staff for working so hard with us this year and for the last several years,” Bacon said. “We have a pretty great working relationship with them and it takes all of us to make changes that work.”

Colorado Secretary of State Wayne Williams reviewed a list of achievements, including the completion of the first statewide risk-limiting audit designed to catch election errors. He also updated clerks on the installation of  ballot boxes to make it easier for voters to drop off their ballots 24-7, and the implementation of Dominion Voting Systems equipment that clerks say has made elections easier to run.

“We are the talk of the nation, as usual,” Williams said. “We are rock stars.”

That assessment was backed up by two nationally recognized election experts at the conference: Commissioner Matt Masterson with the U.S. Election Assistance Commission, and David Becker, founder and executive director the Center for Election Innovation and Research.

“Colorado is at the forefront of ensuring that voting is as easy as possible, while also protecting the integrity of the ballot,” Becker said. “Colorado voters have among the most choices on how to cast their ballot, and should have the most confidence that their ballot will be counted accurately, thanks to the hard work of Colorado’s state and county election officials.”

In addition to Williams, the clerks praised the Colorado Department of Revenue, which oversees the Motor Vehicle Division. The legislature in 2014 and 2015 provided money to update the state’s out-of-date equipment that handles titling and registration and driver’s licenses. The project is called Colorado DRIVES or the Colorado Driver License, Record, Identification and Vehicle Enterprise Solutions.

The transition to the new equipment is slated for August, and at the conference clerk staffers participated in a hands-on academy to show them how the new equipment will work, and revenue director Michael Hartman addressed the clerks.

“I left the conference with more confidence in the Department of Revenue and the team working on DRIVES,” said Mesa County Clerk Sheila Reiner. “Michael Hartman had me at ‘innovations.’”

Clerks praised the conference organizers, including the association’s elected officers and its executive director, Pam Anderson, the former clerk and recorder in Jefferson County. The clerks also hold a summer conference.

“This winter I experienced hands-on training for the new DRIVES motor vehicle system coming in August, which significantly increased my confidence and excitement for its implementation,” she said. “I also spent one morning in an excellent session regarding special event permit liquor licenses.”

Also during the conference, clerks participated in a costume contest based on the conference theme of “change.” The  Pitkin County clerk’s office came in first by modeling hats based on the five seasons — in the mountains you have to put up with “mud” months. Williams wore the mud hat, while Pitkin County Clerk Janice Vos Caudill’s hat represented fall.

Routt County Clerk Kim Bonner, who knows something about mud season in her community, praised Williams for being a good sport. “Mud season was quite appropriate,” she said.

Also for the “change” theme, clerks and their staffs were invited to take videos of themselves dancing to or lip syncing to Sheryl Crow’s “A Change Would Do You Good.”  Clerk Mitchell edited the videos into one video that was well received by conference-goers. Who knew that the Kiowa County clerk’s office was that energetic?

Larimer County was among the offices that participated in both the costume contest and the video.

“The light-hearted side of events reminds us all that our humanness is critical for our own good and for the good of those we serve,” said Larimer County Clerk Angela Myers.

END_OF_DOCUMENT_TOKEN_TO_BE_REPLACED

Benefitting the county, schools, and much more By Don Ireland   This year marks the 30th anniversary of casinos opening in the former little mining towns of Black Hawk, Central City and Cripple Creek, Colorado. In those early years, smoking was allowed inside ... END_OF_DOCUMENT_TOKEN_TO_BE_REPLACED