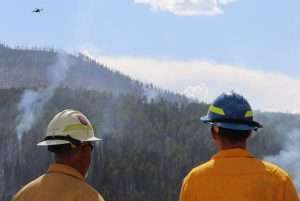 Without the proverbial crystal ball, no one can predict what kind of summer wildfire season lies ahead for Colorado. Factors, including ongoing drought and below-average precipitation in 2020 and 2021, has firefighters and other government officials concerned about the forthcoming summer season. Especially after last summer – when the Cameron Peak, East Troublesome, and Pine Gulch wildfires occurred and grew to become the largest in Colorado’s recorded history, surpassing the destruction caused by the 2002 Hayman Fire. Neither the Cameron Peak nor the East Troublesome fires got close to Gilpin County, although smoke reached many places in the Front Range.

“Drones are a force multiplier in the field in many ways that allow them to gain situational awareness or decision-quality data, allowing the decision makers to make more sound decisions with up-to-date information. It allows the firefighters to be safer and to be used more efficiently to help put out those wildfires,” according to Garrett Seddon, Unmanned Systems Project Manager for Colorado’s Center of Excellence for Advanced Technology Aerial Firefighting (CoE), which is based in Rifle, CO.

“We are using drones to help situational awareness. Some are commercial, off-the-shelf units,” according to Seddon. “They can help us gain situational awareness. A fire crew can use a drone to see what is over the ridge or if the fire is close to them and they can also use the drone at times when it may be too smoky for manned aircraft to fly safely where they are working. They can launch a small, hand-held drone into the air to get a bird’s-eye view. That information can help them make decisions. They can also integrate that into other technology that we work on and provide that information back to the command post.”

“Another way we’re using drones is for aerial ignition missions. Right now, we’re using manned helicopters. Those helicopters are equipped with a machine called a Plastic Sphere Dispenser (PSD). The PSD is installed in the passenger compartment of a helicopter and dispenses plastic spheres out of the door opening of the aircraft. The plastic spheres contain potassium permanganate and are injected with ethylene glycol (antifreeze) by the PSD operator before being discharged. A chemical reaction between the potassium permanganate and ethylene glycol causes the sphere to ignite approximately 20 to 30 seconds after injection. An operator controls the PSD from the back seat of the aircraft. A firing boss oversees firing operations from the front seat. This ignition starts a fire on the ground,” Seddon said. “A drone can be used to reach a programmed target area at a fire and drop the balls. The idea behind that (burn) is when to remove unburned fuel from the area and limit the ability of the wildfire to spread.”

The drones are equipped with a hopper that carries a payload of standard ping-pong ball sized chemical spheres. It can be integrated with infrared and other types of cameras. The spheres are preloaded with potassium permanganate and later injected with antifreeze prior to release. The spheres ignite after hitting the ground, setting off burns to create defensive lines for firefighters in rugged and sometimes unreachable terrain. The system is easily controlled with a custom application and allows drone operators to release the spheres with a high degree of accuracy in terrain that’s often difficult to detect with helicopters or airplanes. The drone’s dynamic ability to fly in densely smoky, high-altitude areas and at night makes it extremely useful.

“You can program the UAV with the area where the ball should be released and watch it as it hits the ground. It is also safer to do this with a drone. There have been lives lost during aerial ignition operations using manned helicopters. Using unmanned aerial systems for aerial ignition provides firefighters another tool to safely conduct aerial firing operations,” according to Seddon.

Drone usage for firefighting wasn’t limited to Colorado resources alone last summer. The U.S. Forest Service and Department of the Interior use drones with long-endurance capabilities, especially at night when flying manned aircraft could be risky. The nighttime drones can provide fire-perimeter information and help officials learn of new fire hotspots.

If you own a drone and there’s a wildfire nearby, Seddon recommends not flying it since your drone could interfere with official aerial fire-fighting efforts. “If you fly, we can’t. If you fly your drone at a wildfire, we can’t fly our manned aircraft with fire-suppression equipment and put out that fire. We can’t protect the values at risk and safely put out fires if you’re flying in our area of operations.”

What does the future hold regarding drones and the CoE? “The technology will become more integrated into our operations,” Seddon said. “We’d like to have everyone out in the field have access to unmanned systems. The natural progression is more understanding of the technology, more training and [federal] regulations catching up with the technology.”

The CoE drives technological advancement to improve firefighting practices and influence innovation across the public safety community. Seddon leads the research and implementation of new unmanned systems technology, software, and other advancements that improve the safety and efficiency of first responders. The CoE helps agencies develop their UAS programs and provides a standard for UAS pilot training. The CoE has researched and evaluated different platforms, sensors, and software and has developed model policies and guidelines to support public safety agencies that establish UAS programs. In addition, the CoE manages the Colorado Department of Public Safety (CDPS) UAS operations and UAS pilot certification program.

Before working at the CoE, Seddon worked in airport management at the Kissimmee Gateway Airport in Florida and the Aspen/ Pitkin County Airport in Colorado. While working in airport management, Seddon ensured airfield safety and compliance with the Federal Aviation Administration through flight safety oversight and Aircraft Rescue Firefighting. In 2009, Seddon commissioned in the United States Army into the Adjutant General Corps. He has served in the Colorado Army National Guard as a human resources manager for multiple units and as the Commander of the 104th Public Affairs Detachment; he is currently the Public Affairs Officer for the Colorado Army National Guard located at Joint Forces Headquarters in Centennial, Colorado.

“Age of Drones” is an occasional feature, explaining how this evolving technology is having positive impacts on businesses, government and humanity.

END_OF_DOCUMENT_TOKEN_TO_BE_REPLACED

Where the dead get to tell their story By Jaclyn Schrock On Saturday, August 21, the Gilpin Historical Society held their annual Cemetery Crawl. Tickets allowed the shuttle of hundreds of guests from the Teller House parking lot to the Cemetery. Depending on v... END_OF_DOCUMENT_TOKEN_TO_BE_REPLACED

Where the dead get to tell their story By Jaclyn Schrock On Saturday, August 21, the Gilpin Historical Society held their annual Cemetery Crawl. Tickets allowed the shuttle of hundreds of guests from the Teller House parking lot to the Cemetery. Depending on v... END_OF_DOCUMENT_TOKEN_TO_BE_REPLACED