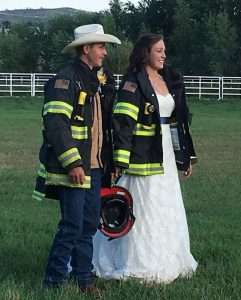 PRESS RELEASE – It is with distraught and broken hearts that we report the death of two of our Central City Fire Department beloved fire fighters. Lieutenant Cody Allen 29, and his wife, Volunteer Firefighter Shelby Allen 27, were found deceased in their home this morning in Central City, Colorado.

Cody Allen had been with the Central City Fire Department as a volunteer since July of 2009, and was recently hired full time to the position of lieutenant. Shelby Allen was a member of the Fire Department as a volunteer since February of 2016. Both Cody and Shelby’s families have been members of this community for many, many years. They grew up in Gilpin County, met, married two years ago, and were looking forward to raising their family right here in Gilpin.

Our hearts and prayers are with the Allen Family, Central City Fire Department Family and our community at this devastating time.

The cause of death has been determined as accidental carbon monoxide poisoning. This

case is still under investigation by the Gilpin County Sheriff’s Office.

END_OF_DOCUMENT_TOKEN_TO_BE_REPLACED

Benefitting the county, schools, and much more By Don Ireland   This year marks the 30th anniversary of casinos opening in the former little mining towns of Black Hawk, Central City and Cripple Creek, Colorado. In those early years, smoking was allowed inside ... END_OF_DOCUMENT_TOKEN_TO_BE_REPLACED