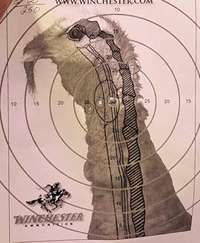 The annual, free event for kids, 8-15 brings many repeat turkey shooters. The new youngsters that come with their family members are amazed that such fun can be found, doing outdoor activities. Paper targets of turkeys with the most shots hits in the bullseye from air-powered BB guns, win a frozen turkey in each 2 year age range.

When families arrived Saturday morning, November 10, at the Boy Scout’s Donald E. Scott Colorado Adventure Point, they were welcomed to the Turkey Shoot. The principle shoot now uses air BB guns to shoot at paper turkey targets. The BB range and other activities are explained and guided by the 35 Christian Outdoor Fellowship of America (COFA) volunteers held at the indoor shooting range. Shooters are given their target, and many go directly to the shooting range. A volunteer gives a training session on how to safely use the rifles and approach the range, following the guided directions. Six kids are aiming and firing on the shooting range at a time, while their family stands in the back area with safety goggles to watch. When everyone has completed their allotted number of shots, the signal is given to go retrieve their target about 25 feet away.

The panel of target judges determined the winning target points for each age group. The winners were the ones with the most hits in the bullseye at noon. Thirty youngsters received prizes with miles of smiles.

Other great outdoor encouraging activities are also free on Turkey Shoot day. The archery range is a big attraction, and many were crafting in the craft room. Eager boys and girls of every age repeatedly took the challenge with safety equipment up the two-story climbing wall. There are also door prizes and games that the kids can enjoy. Thanks to donations given through COFA, families experience outdoor activities for free at the Turkey Shoot.

The Boy Scout facilities are open to the public for individuals and groups. Colorado Adventure Point held an open house the following day to allow more kids to enjoy the experiences, with a reasonable fee. They have a full range of open to the public activities along with opportunities for merit badges, check the schedule at www.coloradoadventurepoint.org.

This Boy Scout’s facility in Lakewood is the Donald E. Scott Colorado Adventure Point. This user friendly location at 10455 6th Ave #150 is just west of Kipling and north of US 6. Community support established this 20,000 square foot facility for Scouting and community adventure education.

COFA sponsors the Turkey Shoot as a way to bring our youth to the realization that actually doing things in the outdoors can be a blast. One of the purposes of the Turkey Shoot is to get kids involved in the outdoors and away from sitting on the couch playing with their electronics. Most kids today have little experience with being outdoors participating in the ways that brought families together for best ways of realizing the ways of the world. That is what COFA does well, it helps families and individuals connect with each other while doing activities in the outdoors, like camping, fishing, ATVs, hunting, hiking, biking, 4-wheeling, photography, etc.

These Turkey Shoots were motivated when Mike Brooks, a physician in Minnesota, was watching a movie telling the life story of Sergeant Alvin Your, a World War 1 congressional medal (CMH) honor winner. In the movie Alvin was in a turkey shoot as a young man, bringing real life adventure into our modern world while living and interacting with nature. Many urban centered families are estranged in many ways from our previous dependence on nature. COFA encourages the unity of family and friends though outdoor adventure and skills, along with Christian fellowship opportunities around campfires, on the trail or simply by growing lasting relationships. COFA is focused on relationships shared in adventure, it is not an evangelism program to preach the Gospel, but instead a travel together along God’s path to discover His provisions and grace.

Mike Brooks came to Colorado for an elk hunt. He came alone, and so very much enjoyed the grandeur of God’s world here, he brought others back with him, following years. He was better prepared the following trips. The first trip could have taken his life with the dangers he encountered, but he was rescued. Another hunter in the same area was not so fortunate – he was not found alive. Mike and his companions from a wide range of experiences began making this an annual event. Making elk hunts, fish camps and turkey shoots as COFA developed from the relationships that grew around the campfires as God’s amazing creation was discovered, adventured and appreciated.

The first Turkey Shoot in our parts was held in Evergreen, with shooters about 10 years ago. The next year 18 kids came to shoot turkey targets. When COFA moved the Turkey Shoot to Beaver Ranch Community Park in Conifer, 150 kids were safely trained to shoot the BB rifles, trained and guided by COFA volunteers. When regulations banning projectiles were established, the location was moved indoors to the Colorado Adventure Point. This year, 300 children were expected.

Mark Sherak volunteered to play homemade and traditional music picking strings and singing for the Turkey Shoot. He also told about being a Boy Scout leader for 30 years, and finding anything to do to be able to be outdoors. Sherak also told what it was like to go to a Fishing Camp, held as a COFA Fall Retreat, generally in the fall, after mosquitos have passed. Camp Oak Hills on Lake Marquette south of Bemidji, MN has cabins for each family group. There are fishing rods available to use, and flat bottom boats with outboard motors. There are a number of lakes connected by water ways, so the boats can take you to many areas. The days are filled as you choose: fishing, or letting someone guide you to a fishing spot, or relaxing your own way. You can fish the reeds to get northern pike or out in the middle of the lakes for walleyes. The kids love to get the perch and blue gills. The nights, after dinner is served, has a guest Christian speaker and music. Friendly fellowship and fish stories abound. God is the one pulling folks to these camps and to be with people who seek Him through the great outdoors.

Lyn Thompson cannot recall how she was able to meet Mike and the other COFA folks, but she is happy to be able to spend time in the great outdoors. The ATV trip is in the end of July and they stay in Ridgeway, Colorado and enjoy gathering at the True Grit Café, of John Wayne movie fame. The cost was only to travel, stay and eat there. COFA volunteers brought ATVs and many had an empty back seat to bring along those who did not have their own ride. Thompson told of her recent retreat near Ouray, Colorado with about 20 COFA outdoor enthusiasts attending. The scenery of Owl Creek Trail was incredible, and Lyn’s enthusiasm for her 8 hour ATV trip from Ridgeway area to Ouray and back was memorable. She began her story telling of going through Ouray to get to Ridgeway, where they stayed. They enjoyed the nostalgia and good food of the True Grit Café.  They prepared for every kind of weather and took a packed lunch for the day trip.

The views of the Court House Mountain, Turret Ridge, and Red Mountain Pass from the ATV were captivating. Some of the heights made you dizzy to look down. Places were pointed out from the vistas, and then, you got to ride past old mining camps, and an old trailer someone still lives in. The ride was so thrilling, to be shared with friends. The trip back turned out to be more eventful than the trip there. It had begun raining, and as they realized shelter would be best, they came upon an old empty cabin. Just as they got inside with their lunches, it began to a bruising hail storm. They waited out the storm, then traveled the narrow trail up the steep rock face up hill with steep drop-offs the other way. They were shocked to realize that the pavement was being washed away by the water. The road was closed for an hour as repairs were made after they had crossed by the washed out parts.

END_OF_DOCUMENT_TOKEN_TO_BE_REPLACED

Where the dead get to tell their story By Jaclyn Schrock On Saturday, August 21, the Gilpin Historical Society held their annual Cemetery Crawl. Tickets allowed the shuttle of hundreds of guests from the Teller House parking lot to the Cemetery. Depending on v... END_OF_DOCUMENT_TOKEN_TO_BE_REPLACED