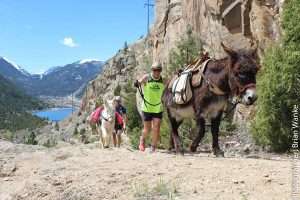 Run Your Ass Off

Clear Creek County Memorial Day week end held two races. The first was 5-6 miles that includes a 12% grade over rough areas, and the 2nd was 10.5 miles passing old mines, including the Arco. Burro races continue into September through mountain areas of Colorado where it is officially a summer heritage sport.

The 2019 Clear Creek County Burro Race in Georgetown, called Run Your Ass Off, has been in other parts of the summer, but moved to Memorial Day weekend this year combined with other local celebrations. For their 5th annual race, they had 57 finishes on Saturday, May 25th. The first place burro/human team finished in 1: 15:21: George Zack age 49. The top 10 teams finished within 6 minutes of each other. The last “ass over the pass” was Joann Rouillard finishing in 3 hours, 37 minutes and 33 seconds. The last two finished within 6 minutes of each other.

The Idaho Springs Pack Burro Race, held on Sunday, May 26th was their 19th annual race, and had 70 human/burro teams finish. Idaho Springs first place team finished in 50 minutes and 13 seconds; Andrew Knutsen. The top 10 finishers were within 6 minutes of each other, with six of them being in the top 12 in Georgetown. The top seven all finished in 50 minutes. The last ass over the pass was Lisa Boland in her 50’s , finishing in 1 hour, 51 minutes and 36 seconds. The last two finished in 26 seconds of each other, with Lisa’s team still walking while the second to last, Joann Rouillard’s team gave a final burst of running at the end.

With the Colorado Gold Rush beginning in 1859, plenty of prospectors came a-running. To get to the mountains where gold was being found, a few supplies were needed. Burro’s (Spanish for donkey) were surefooted in the mountains, and worked well as pack animals. They carried the pick, gold pan, and other supplies for prospecting. The prospector, walked, keeping the donkey on a lead line.

The often told legend tells of two prospectors who found gold in the same location. Each wanted to get back to file a claim to continue mining there. Each had a burro, loaded with their tools of the prospector’s trade. The animals could not hold tools and human, so they each raced back to the claim office leading the burro with a rope.

Another version of the story includes a drunken bet that one prospector could get back to Leadville over Mosquito Pass before the other, claiming a $500 win in the late 1800’s.

Many prospectors left their burro’s to roam in abandoned mining towns when the prospects were not so good. They got on a train and went somewhere else, leaving their burro behind. These wild burros reproduced and became a nuisance in many areas. Few still remain, but Colorado Burros have a new purpose in life.

Pack burro races are located in historic mining towns as part of their summer celebration. The current list of communities that hold pack Burro races are: Georgetown, Idaho Springs, Cripple Creek, Buena Vista, Leadville, and Fairplay. The last three are considered a Triple Crown, like in horse racing, one who wins all three races wins the Triple Crown.

Fairplay to Leadville may have been one of the first pack burro races for runners on a course over rough trails, open fields, and occasionally along dirt roadways. Official rules and electronic winners are carefully monitoring the weight the animal caries and may include a veterinarian inspection of the animal after the race. The events that developed out of wild burro racing in an arena area in Cripple Creek, which latter took to trails, influenced the rules of Western Pack Burro Association.

To enjoy the natural beauty of Colorado, the exhilaration of hiking rugged trails at high elevations where the original late 1800 prospect miners brought their burros, pack burro racing was revived. The original use of donkey’s packed for prospecting lead by a rope with trails and finish lines that confirmed no harm to the animals established the sport of historic Colorado origins by racing from start to finish.

Western Pack Burro Association is the place to get registered for a race paying a fee to participate. If you don’t have your own burro and pack saddle, these can be rented for the event. Prize money is given to the top 10 finishers as well as a few other special awards.

A marked course is traveled with the runner leading the burro with a rope tied to the muzzle harness. The rope may not be more than 15 feet long, and the runner must be in control of the burro at all times.

Races vary in length and challenge. The short course may be eight miles or less. Medium length is generally around 15 miles. But the granddaddy, over Mosquito pass is nearly 30 miles. Some races have steep grades or many switchbacks. There are rocks and trees to get over and under. Some go through open fields, or cross creeks, but 90% of the race will be on the dirt roads and trails. Generally only the beginning and end of the race is in a man-made area. Trails often go by the old mines, where other burros’ hauled wagons of ore.

The pack rig has a wooden X near the shoulders and rear of the donkey, connecting the front and back X with at least three points along the animals sides and back. It is placed over a blanket and synched similar to a saddle. This is how the packs are secured to the animal. 33 pounds of traditional mining gear are required for the race pick, shovel, and gold pan. Any other food or supplies the burro carries is in addition to the 33 pounds (15 Kilograms) of mining gear, and slows down your burro’s speed.

Cruelty to animals is strictly forbidden, and a veterinarian may inspect the animal after the race.

Wild burros are hard to find, now. They had been left behind by miners who abandoned their claims. Many communities found them a nuisance, so had them removed. The burros in the race are many different breeds some small, some tall, but all with really big ears.

The burros used in these races are generally rented from a breeder for the race. The breeder delivers them with their pack for the race. Races are a good way to give the burros exercise since they are often kept in a pasture.

Idaho Springs, as with most mining communities, has the original business district and many old homes. The community makes a big celebration of its heritage as do other communities during the burro race. Many people enjoy the novel shops and business, parks, and recreation areas.

Idaho Springs set up a holding area for the returning burros. The portable fencing on a side road was marked off in about two square feet sections. $2 bought you a chance to choose the section that would receive the largest pile of poop, while waiting for the awards to be given. The winner, an officer not present being on duty, won $200.

Anyone who enjoys the real smells of the Colorado Rockies, mixed with the smells of a pack animal, and enjoys hiking, may also enjoy being a burro racer to help perpetuate Colorado history.

END_OF_DOCUMENT_TOKEN_TO_BE_REPLACED

Where the dead get to tell their story By Jaclyn Schrock On Saturday, August 21, the Gilpin Historical Society held their annual Cemetery Crawl. Tickets allowed the shuttle of hundreds of guests from the Teller House parking lot to the Cemetery. Depending on v... END_OF_DOCUMENT_TOKEN_TO_BE_REPLACED

Benefitting the county, schools, and much more By Don Ireland   This year marks the 30th anniversary of casinos opening in the former little mining towns of Black Hawk, Central City and Cripple Creek, Colorado. In those early years, smoking was allowed inside ... END_OF_DOCUMENT_TOKEN_TO_BE_REPLACED