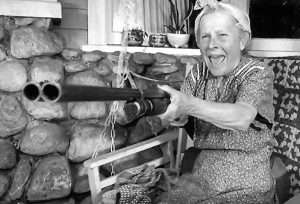 At gunpoint below Black Hawk

“Clear Creek Annie,” armed with a court order and two double-barreled shotguns, reigned supreme over her 100-foot strip of land Tuesday. Engineers for the state highway department – men who think nothing of cutting a slice out of a mountain to put in a road – kept at a safe distance, and work on a $3,500,000 superhighway was stopped cold.

Mrs. Annie Davis, a 68-year-old woman miner who obtained “squatter’s rights” on the land, lives in a converted railroad car.

Her uncharted piece of land somehow was not counted when the highway department purchased rights-of-way for the new road. It wasn’t until last week that the engineers saw they have to put a critical bridge through the gulch near Annie’s cabin.

They offered to move her house to another location, but she discouraged any direct negotiations by waving one of her shotguns. When attorneys were called in, they discovered that she had a court order permitting her to remain on the land for another 45 days.

An assistant to the Attorney General said he probably would try for an out-of-court settlement with Annie’s lawyer, who said he wasn’t sure how the aged prospector would react. He didn’t know whether it would be ethical for him to work out an agreement without first consulting his client.

But, like the road-building gangs, he was afraid to venture too close to Annie’s cabin.

Reprinted courtesy of the Eugene Register-Guard, first published on March 13, 1950.

END_OF_DOCUMENT_TOKEN_TO_BE_REPLACED

Benefitting the county, schools, and much more By Don Ireland   This year marks the 30th anniversary of casinos opening in the former little mining towns of Black Hawk, Central City and Cripple Creek, Colorado. In those early years, smoking was allowed inside ... END_OF_DOCUMENT_TOKEN_TO_BE_REPLACED