City of Central threatened with lawsuit 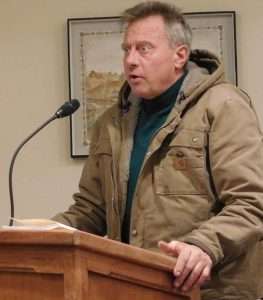 Central City Council met with Staff for a Work Session immediately prior to the regular meeting on Tuesday, March 19, 2019. The topics covered were a presentation by DRCOG (Denver Regional Council of Governments) and a discussion of Business Improvement District (BID) boundaries with the BID bondholders. A representative from DRCOG gave a presentation of all the services and resources they provide to this region and the benefits of membership with DRCOG. This was followed by a presentation by two lawyers from Sherman and Howard LLC representing the bondholders for the Central City Parkway (Casino Parkway).

Attorny David Wilson cited violations made by the City of Central to an Intergovernment Agreement (IGA) between the City, the Business Improvement District (BID), and the Parkway bondholders. Wilson declared that the bondholders are “angry” and “feel disrespected” by the actions of the City. He referenced the passage of Ordinance 18-03 which sold land to Whispering Pines, LLC (KOA) which would have required Whispering Pines to be included in the BID boundaries, but instead, they were exempted from that condition. Wilson argued that this is a direct violation of the IGA which states that all commercial property annexed into the City and all non-included commercial properties must be included in the BID. Wilson further stated that if the City defaulted on the bonds, access to financial markets would be nearly impossible. He gave the City until the following meeting on April 2 to respond to the statements and present a plan to move forward, and if they do not, the bondholders would pursue legal action.

Manager Miera reminded the Council that this is a Work Session and not a legal proceeding; and although the contents of the presentation were not known ahead of time, he advised against making any decisions or discussion. City Attorney McAskin addressed Attorney Wilson and requested that a response from the City be made by the April 16 meeting to allow time for an Executive Session on April 2. Alderman Hidahl requested Wilson to be precise about exactly what they need the City to address. Wilson replied that there are three things they need to know: the first is what they City plans to do about the sale of property to Whispering Pines; the seconed is what the City intends to do with other commercial properties not included in the BID and whether the City intends to honor the IGA; and the third is to reverse Ordinance 17-03 which repealed and replaced the Parkway Access Code titled “City annexation or inclusion in Central City Business Improvement District.”

Ordinance 17-03 added language stating property owners “may… be required to execute and file a petition or petitions for inclusion… within the boundaries of the District,” which puts ambiguity on whether or not a new commercial property would be included in the BID.

Executive Director of the BID, Joe Behm, addressed the council with a written statment by John Zempel, owner of Johnny Z’s and Grand Z casinos, that admonished the Council for selling property to a commercial owner without inclusion into the BID and finished by saying, “It should be a fair playing field for all of us that receive the benefit of the Parkway.”

Mayor Fey led the Pledge of Allegiance and then asked for any amendments or additions to the evening’s agenda. Alderman Hidahl asked if they should add an Executive Session for questions related to the statements made by the attorneys for the Parkway bondholders. Attorney McAskin responded that they could add that if that were the wish of the council. Alderman Hidahl moved to add an Executive Session at the end of this meeting to address questions regarding the Work Session and was seconded by Mayor Fey. The motion passed unanimously with comments on making it no more than ten minutes.

The Mayor called for a motion to approve the consent agenda which consisted of the minutes from the March 7 meeting and regular bill lists through March 19. Alderwoman Laratta moved to approve the Consent Agenda and was seconded by Alderwoman Mitchell. The motion passed unanimously.

Mayor Fey opened the floor to the public for anyone who wished to speak to a topic on that night’s agenda. No one chose to speak to the Council at that time.

Mayor Fey called Director Rears to present Resolution BOA 19-01. Director Rears requested Council to recess and then reconvene as the Board of Adjustment before he could continue. Mayor Fey briefly consulted with Attorney McAskin and recessed the regular meeting and convened as the Board of Adjustment at 7:16 p.m. to consider Resolution BOA 19-01 which would approve a variance request submitted for property known as the Shores Residence and set forth Findings of Fact. The Shores Residence is a parcel on Eureka Street between Prosser and H Streets. The property owner, Stephen Shores, is petitioning to have a dwelling built six feet from the front property line; however, zoning requires a ten-foot setback. Rears first went through each condition for a variance explaining how Shores has met each condition, such as physical and geographical features of the land, and then presented an email received March 19 from neighbor Terry Frederick supportive of the variance.

Property owner Stephen Shores addressed the Council. He stated that he is seeking the variance to preserve the historic “rock walls and the beauty of the mountain behind.” Deb Wray reported “I’ve been on the HPC (Historic Preservation Commission) through all his (Shores) permits and it’s really going to fit into Central City with the design. Please approve it.”

Alderwoman Laratta moved to approved Resolution BOA 19-01 and was seconded by Alderwoman Mitchell. The motion passed unanimously. The Mayor recessed the Board of Adjustment and reconvened the regular meeting.

The Council next reviewed an application for the open Planning Commission seat submitted by Dena Hunter. Hunter has lived in Central City for more than 11 years and feels “that the city is up and coming.” She believes that to compete with Black Hawk, the City needs to bring in more diverse businesses and have more to offer for families. Hunter has family members that have lived or operated businesses in Central City prior to gaming. Dena spent 40 years in the telecommunications industry and is now retired.

Alderman Aiken moved to approved Dena Hunter for the Planning Commission and was seconded by Alderwoman Mitchell. The motion passed unanimously.

Manager Miera reported to Council that the annual Opera Picnic is scheduled for Monday, June 24, but with a new council and new majority, he wanted to make sure he gets clear direction from Council whether to continue to have the picnic on Main Street or to move it back to the William C. Russel Park. Alderwoman Laratta wondered why they don’t use the park between Spruce and Eureka streets, to which both Mayor Fey and Alderman Aiken commented it was too small. Alderman Hidahl stated he would like to see a compromise because Main Street does not fit the intention of the picnic; attracting too many people that do not have an interest in the opera but do have an interest in free food; and Russell Park is not within reasonable walking distance and inconvenient, so “I suggest we do it in the Teller Lot.” Mayor Fey commented that he has only been to two picnics, both of which were on Main Street and “I like the integration of casino patrons” with opera people, “but I will default to the options of people who have been there in the past.” Alderman Aiken stated, “I like Jack’s idea.” Mayor Fey asked the Director of Properties, Eric Chinn, what he thought, and Eric replied, “I like the idea.” Alderwoman Mitchell commented, “My only request is you make accommodations for bathrooms!”

Several council members, along with the City Manager, complemented Public Works, the Central City Fire Department, and Gilpin Sheriffs for their work with the recent storm and the gas line break. Alderman Hidahl also thanked Staff for putting together the Belvidere Theatre Forum on March 18.

Council moved to enter Executive Session at 8:01 p.m. regarding proposed amendments to the 1999 Growth IGA. The next regular Council Meeting will be Tuesday, April 2, 2019.