Christmas at the Bobtail Mine in Black Hawk 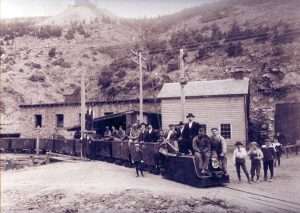 From the Early Days column of the Weekly Register-Call on January 8, 1897

At the Bobtail Mine near Central City in the early days, Pat Casey held forth as the greatest character in the camp and his night shift had a reputation for belligerency all over the mountains. There was a large number of Cornishmen in one tunnel who were great wrestlers and frequently sent challenges to other parties, which were seldom accepted, as the men of Cornwall are strong and expert. But the shifts in another tunnel, Irishmen, Englishmen, and Americans, easily got even when it came to boxing or real earnest fighting. So the bad blood grew until fights were of almost daily occurrence. Several men were disabled and Casey announced the first man caught fighting would be discharged without questions as to the merits of the case.

This order was extremely distasteful, and at length the superintendent, who liked a good mill, made the proposition that they should store up their grievances and have some good round contests between champions of both sides on Christmas. The men caught at this proposition eagerly. It rained hard and constantly about Christmas time and they had to keep pumps going night and day to keep the mines clear of water. On the 24th there was a roar and a rumbling as though an earthquake had struck the hill. A great mass of earth, loosened by the heavy rains, had detached itself from the hillside and slid down across the mouth of the second tunnel, blocking it completely. The men were shut off from escape.

The men from the night shift set to work with pick and shovel to clear away the earth. It was heavy work, but they kept at it, apparently forgetful of their feud with the imprisoned Cornishmen. It was not more than two or three hours until the earth was nearly all removed and they could hear the voices of the men in the tunnel. Then they gave a great cheer and fell to work with renewed vigor. At last a pick broke through, and the opening was enlarged so that the first prisoner crowded out. It happened that he was the most aggressive of the enemy, but he was received with open arms. Others followed and soon all were safe. None had been injured, as the tunnel was well timbered and had not caved in. After this of course, fighting was out of the question, and it seemed Christmas would pass without excitement.

Arrangements were made for a grand spread in the lodging house. Unlimited provisions, solid and liquid, were brought up from Black Hawk and about 7 o’clock Christmas day the miners were all assembled. Pat Casey was called upon for a little speech, and as he was about to say something one of the Cornishmen handed him a piece of paper. He opened it and announced that Ted Alwyn would bet two days’ pay that he could eat more mincemeat pie than any one in Tunnel No. 1, Mike Hanley preferred. Hanley stepped forward, depositing the amount of the wager. The example of these two was followed by all sorts of ridiculous wagers, from drinking whiskey straight to holding out a 10-pound sledge at arm’s length. But throughout all, the utmost good humor prevailed, and while they were frequently boisterous and rough, there were no fights and no bones were broken.

The newspaper article was written in 1863 and originally appeared in The Field and Farm. More stories about Pat Casey will run in this column soon, including his biography. The reproduction of the Bobtail Mine in watercolor is by Herndon Davis, who is best known for painting the Face on the Barroom Floor, in the Teller House bar.

END_OF_DOCUMENT_TOKEN_TO_BE_REPLACED

Benefitting the county, schools, and much more By Don Ireland   This year marks the 30th anniversary of casinos opening in the former little mining towns of Black Hawk, Central City and Cripple Creek, Colorado. In those early years, smoking was allowed inside ... END_OF_DOCUMENT_TOKEN_TO_BE_REPLACED

Benefitting the county, schools, and much more By Don Ireland   This year marks the 30th anniversary of casinos opening in the former little mining towns of Black Hawk, Central City and Cripple Creek, Colorado. In those early years, smoking was allowed inside ... END_OF_DOCUMENT_TOKEN_TO_BE_REPLACED