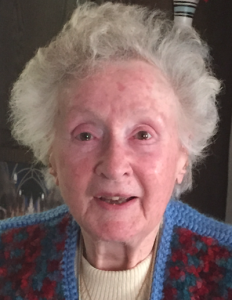 Christa Maria (Seidel) Siemer, 93, departed this life on May 24th, 2018. Christa, or Chris (as she was known to many) was born on November 22, 1924 in Trachenberg, Germany. As the daughter of a dentist, Christa spent a happy childhood until World War II when the family became refugees. At the age of 16 Christa joined the Red Cross as a nurse’s aide.

Following the end of the war, Christa worked in the civilian department for the United States Army.  It was during this time she decided she wanted to be an American. She applied for an Au Pair position in Dorchester England. While in England, Christa learned the English language and earned enough money for passage to America.

In 1954 Christa sailed into New York on the USS United States and then traveled by train to Iowa where her sponsors lived. It was there where Christa met her husband Leander Siemer. Following their marriage in 1956, Lee and Christa farmed near Britt, Iowa and raised three daughters until the family moved to Central City, Colorado in 1971. After a few months, Lee and Christa opened the “Double ‘L’ Café.” The combination restaurant, gas station, and grocery store allowed the Siemers to be an integral part of the mountain community and kept the family very busy for a number of years.

In 1979, Lee and Christa retired in Sierra Vista, AZ where they spent several of their happiest years.  Following Lee’s death in 1984, Christa relocated to Lakewood, Colorado to be closer to her daughters and grandchildren. She became very actively involved in St. Bernadette’s parish and sang in the church choir for many years. During this period, Christa also worked as a volunteer at St. Anthony’s Hospital and as a good will ambassador at the newly opened Denver International Airport.

Christa lived happily in her own home until her death and passed peacefully surrounded by family and loved ones. Christa was deeply loved and will be forever missed.