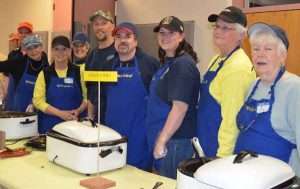 Community gets fired up by supporting our local responders

The High Country Auxiliary (HCA) volunteers hosted a crowd of 280 on Saturday, March 5, at their annual chili dinner and silent auction to benefit the Timberline Fire Protection District (TFPD) and Gilpin County Animal Response Team (GCART). Once again, the bean bust and belly rub was held at the Gilpin Community Center for this worthwhile cause. Although attendance was down a bit from the past few years, those who attended thoroughly enjoyed the event.

A huge boost for the HCA was provided by the chefs of the Reserve Casino, who prepared all of the chili and cornbread this year. In the past, the Auxiliary volunteers have done all of that preparation. The volunteers expressed heartfelt thanks to Chef Sean Boutot, who created the red and white chilis; Food and Beverage Supervisor Jessica Urguhart, creator of the green and veggie chilis; and Food and Beverage Director Tom Anderson of the Reserve for kindly permitting this contribution.

HCA’s Diane Rittenhouse said, “This is so wonderful, because it saves our volunteers approximately 40 hours of work. We don’t even know how we can thank the Reserve for this.”

HCA volunteer Susan Keim-Tamm works in the Reserve’s Bistro 321 and was instrumental in arranging the assistance, Rittenhouse advised.

The dinner and auction is the Auxiliary’s largest fundraising event each year and requires many hours of work for several months in advance. More than 40 HCA members and several non-members put on the huge event. Those organizing the dinner were Keim-Tamm, Dorothy Sweet, and Janie Ikler. The auction was organized by Rittenhouse and by Wanda Sundquist. Sundquist coordinated the volunteers in getting items for the auction, cataloguing everything, and making bid sheets, with the capable help of Crystal Samms. Rittenhouse organized the auction itself and scheduled all the volunteers. Firefighters helped out, too, by setting up tables and chairs, carrying roasters, serving chili, helping with the auction, clearing tables, or whatever else was needed.

Of course, it will take a few weeks to calculate the amount raised at this year’s event, after expenses. Last year’s dinner and auction raised close to $9,500. HCA’s other 2015 events, the community flea market in June and the county fair in August, together raised about $5,500.

One big project that HCA is helping the firefighters with this year is emergency medical technician (EMT) classes. The Auxiliary has funded half of the cost of the class, or $16,000. The other half has been funded by a grant. There are more than 20 students in each class, and HCA volunteers prepare and deliver two meals each week to Station 7 for the classes. The students are very grateful for the meals, as some of them come directly from work and don’t otherwise have time to get dinner.

Rittenhouse said HCA also paid for a fair portion of the annual firefighters’ awards dinner, with gifts for the three top firefighters.

A special highlight of the evening was the donation of more than a dozen quilts handcrafted by the Gilpin Stitchers. Several members of their group were on hand to present the blankets for placement in TFPD fire trucks. When the firefighters are out on a call, and a child or adult needs warmth, the blankets will provide needed comfort. There was even a small blanket for a baby or doll.

Chief Levy gratefully accepted the quilters’ donations. “This is amazing work,” he praised. “We will put these in all of our trucks.” He noted that the Gilpin Stitchers would appreciate receiving donations of fabric; anyone wanting to contribute material was welcome to bring it to TFPD Station 3 at 660 Highway 46. Chief Levy said he would see to it that the Stitchers received it so they could make more quilts.

After everyone had their fill of the delicious meal, they drifted over to check out the items available for the auction and to learn about their local response teams. TFPD handed out fire mitigation literature and kids’ fire hats. Reflective address signs were available for purchase. GCART handed out flyers detailing a recent grant that allowed them to purchase a mobile trailer and letting people know about upcoming training opportunities. Both TFPD and GCART encouraged people to get involved and volunteer with these valuable organizations.

Rittenhouse mentioned, “We received unbelievable donations for the silent auction from businesses and individuals from around the area – all of Gilpin County, Nederland, Coal Creek Canyon, Boulder, Golden, and Arvada. They are the ones who make the silent auction a success.”

About 200 high-quality goods were offered, from beautiful jewelry and artwork to a car care gift pack, stuffed animals, and even a Young Chang spinet piano up for bid. Among the scores of unique items were a Raku clay-fired wall shield, a “Space Cats” 2016 calendar, an antique photo box, “First Ladies’ Cookbook,” and Pfaltzgraff folk art pattern dishes.

Chief Levy stopped the bidding at 7:00 p.m. so that HCA workers could gather the bidding sheets and tally the winners. As the chief announced the lucky numbers, gratified winners stepped up to pay for and claim their treasures. Those not present would get a phone call to arrange to retrieve their items later. Any items that were not bid on will be put on sale in June at the community flea market.

Once again, a hearty thanks from the Gilpin community to those who work so hard to serve us!

END_OF_DOCUMENT_TOKEN_TO_BE_REPLACED

Where the dead get to tell their story By Jaclyn Schrock On Saturday, August 21, the Gilpin Historical Society held their annual Cemetery Crawl. Tickets allowed the shuttle of hundreds of guests from the Teller House parking lot to the Cemetery. Depending on v... END_OF_DOCUMENT_TOKEN_TO_BE_REPLACED

Benefitting the county, schools, and much more By Don Ireland   This year marks the 30th anniversary of casinos opening in the former little mining towns of Black Hawk, Central City and Cripple Creek, Colorado. In those early years, smoking was allowed inside ... END_OF_DOCUMENT_TOKEN_TO_BE_REPLACED