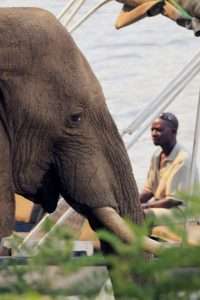 Tucked above the banks of the Zambezi River in the Chiawa Game Management Area of southeastern Zambia, lies a village of six hundred people. Well off the beaten track and accessed by boat, in order to visit, one must first gain permission from their chieftainess Christina.

Carving a living out of farming and husbandry, the residents of Chiawa Cultural Village live modestly. The men find seasonal employment at the nearby safari camps and fishing lodges. Both men and women work the fields in the rainy season that yield sweet potatoes, tomatoes, onions, peppers, okra, and eggplant. Jujube fruit is collected that looks like a Royal Ann cherry with the consistency and taste of an apple. Sprinkling chili powder on the perimeter of the fields deters elephants that would otherwise destroy their crops. More than one elephant has suffered a sneezing attack from the spicy repellant. Rangers are sometimes called-in to eliminate habitual offenders. A watchtower in the center of the fields is manned around the clock. When an elephant or elephants venture too close, the watchman bangs a drum and everyone comes running to scare away the intruder. Maize and sorghum is also grown and are the ingredients in the staple porridge nshima. Goats, chickens, fish, eggs, and guinea fowl provide protein and doves are a delicacy. The guinea fowl are fed each morning to keep them around until they are corralled, killed, and eaten. Not particularly intelligent and of silly nature, they leave their eggs lying about unattended – relying on warm temperatures to do the incubation and nurturing for them. Villagers gather the dropped eggs and set them under chickens to speed the process.

Unlicensed killing of wild game by any means is prohibited in Chiawa Game Management Area. The penalty for illegally taking an impala is one year in jail and poaching an elephant punishable for fifteen years. Trophy hunting is allowed only by those who pay a princely sum to the proper authorities. The price tag paid by rich foreigners for bagging a bull elephant is up to fifty thousand US dollars and removes the best but oldest of the male breeding stock. Most of their DNA has already been passed on. Due to the effectiveness of anti-poaching patrols elephant numbers are stable and reportedly increasing in both the Game Management Area and adjacent Lower Zambezi National Park. Crocodiles, hippo, Cape buffalo, warthogs, baboons, antelope, and many other endemic animals are fair game to hunters but wild cats such as lions and leopards thankfully at the moment are not. Fresh meat from the elephant hunts is donated to the appreciative villagers.

END_OF_DOCUMENT_TOKEN_TO_BE_REPLACED

Where the dead get to tell their story By Jaclyn Schrock On Saturday, August 21, the Gilpin Historical Society held their annual Cemetery Crawl. Tickets allowed the shuttle of hundreds of guests from the Teller House parking lot to the Cemetery. Depending on v... END_OF_DOCUMENT_TOKEN_TO_BE_REPLACED

Benefitting the county, schools, and much more By Don Ireland   This year marks the 30th anniversary of casinos opening in the former little mining towns of Black Hawk, Central City and Cripple Creek, Colorado. In those early years, smoking was allowed inside ... END_OF_DOCUMENT_TOKEN_TO_BE_REPLACED