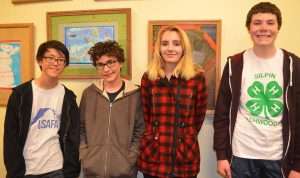 The Gilpin County Board of Education met on Tuesday, November 7, at 7:00 p.m. Craig Holmes, Brook Ramsey, Charlotte Taylor, and Steve Boulter were the Board members present; Kersten Armstrong was absent. Superintendent David MacKenzie and Secretary to the Board Joni Schmidt were present.

Elise Vincent was recognized as the October artist of the month. The fourth grader’s project was done in chalk pastels and incorporated the technique of proper facial proportions. Kindergartner Lydia DeGuelle was November artist, with her self-portrait collage. The collage featured an “elongated” concept. Both students put 100 percent effort into all they do, art teacher Curt Halsted reported.

On behalf of the Board, member Boulter had received a gift of Gilpin High School memorabilia from Don Mattivi, Jr. The donation contained a number of letter jackets and letter sweaters, football and basketball pins, yearbooks, and scorebooks from days gone by. Mattivi discovered the items when he was taking care of his father’s estate. Don Mattivi, Sr. was a 1950’s Gilpin alumnus, and his son graduated in the 1970’s. The school colors back in those days were black and orange, and there were only seven members in the class.

The November 7 meeting was the final one for Board member Charlotte Taylor. The Board members and assembled public celebrated Taylor’s many contributions and years of service. She served from 1997-2000 and again from 2009-2017. A framed resolution proclaimed that November is “Charlotte Taylor Recognition Month.” The Board officially recognized her as a strong advocate for public education and noted that her leadership resulted in the accomplishments of the November 1998 construction bond, the 2009 Black Hawk Educational Enhancement Tax, and the 2017 District earning the status of “Accredited with Distinction.”

“Her leadership has made a profound difference in the lives of Gilpin County School students, staff, parents, and patrons,” the resolution stated.

Board members gave Taylor a parting gift of Celestial Seasoning teas and treated everyone to cupcakes.

Four students in secondary science teacher Heather Newman’s class had been asked to do a special chemistry project. Damien Sonsino, Drake Hylton, Hailey Perryman, and Shane Wu were given just two weeks to examine five unknown substances and come up with procedures to identify, classify, handle, and dispose of the substances.

First, the students presented background information for the fictitious scenario that formed the basis of their assignment. “After the closing of a local Colorado high school, it has been discovered that the chemical stockroom has been poorly managed. Dozens of unlabeled chemicals line the shelves. The state is in need of assistance to clean out the stockroom.”

The students, calling themselves “Colorado Chemical Cleanup, Inc.” had to complete their assignment in order to meet the deadline for the demolition crew assigned to the supposedly defunct school building.

The questions were, “What chemicals are these, and what is the best way to dispose of them properly? What chemicals are homogenous or heterogeneous mixtures, and what are pure substances?” They came up with a hypothesis, or theory, about each of the substances and set about testing them. They distilled one substance to see if it left any residue, tested the metallic properties of another substance, check the powders of two substances to see how they dissolved in water, and put the last substance into a centrifuge to see if anything separated.

They were able to identify only two of the substances’ exact compositions, but were still able to find what to do with the others based on their properties. Magnesium and sucrose were identified and able to be thrown away. The students found that another substance was non-hazardous and could be flushed down a sink. The other two substances had to be placed in a hazardous waste container and disposed of in a drop-off facility.

“Couldn’t you just taste them?” joked Board member Boulter.

“No! That’s the worst thing you could do!” responded Damien Sonsino with a broad grin. “Don’t ever taste chemicals!”

The Board approved the operating statement and check vouchers for the month of October. General fund revenue was $314,738 and expenses were $386,666.

Erik Bowen of Holscher, Mayberry & Company, the District’s auditors, presented a draft of the 2016-17 budget audit.

Bowen noted that the District’s total net position from governmental activities was about $10 million as of June 30, 2017. This represents a decrease of about $2.5 million in total net position from the prior fiscal year, Bowen said. He particularly highlighted a net pension liability of $18.5 million. Business Manager Terry Scharg, also present at the meeting, related that Colorado PERA is in the process of making changes that will affect employers, employees, and retirees.

Bowen said that the District’s debts are “very lean” compared with other school districts, the two main ones being a bus purchase that is to be paid off in 2018 and a copier lease to finish in 2020. He reported that the District’s biggest asset is $16.9 million in net governmental capital assets. He said he was pleased with the numbers, and Board member Holmes agreed that the District is about right where the Board expected it to be.

The Board briefly considered policy ADF-R for first reading. The stated goals of the policy were to promote the development and practice of lifelong wellness behaviors, to promote nutrition education and proper dietary habits, to promote healthy nutrition choices to encourage a healthy learning environment, and to provide daily opportunities for students to engage in physical activity.

MacKenzie presented six banners announcing that Gilpin County RE-1 was “accredited with distinction” by the Colorado Department of Education, to be displayed in various locations around the school. Another banner proclaimed that Gilpin has been ranked eighth in Colorado by the rating company School Digger.

MacKenzie reported on a professional learning day that took place on November 3. At the meeting, he thanked the staff for their accomplishments in relation to the accreditation and School Digger rating. He had also encouraged the staff not to become complacent but to remain accountable and sustain the effort. The teachers attended sessions on technology, increased rigor in math classes, and Marzano strategies.

The Board of Education will host a staff appreciation dinner on Thursday evening, November 9, from 5:00-9:00 p.m. at the Elks Lodge in Central City. The staff will receive t-shirts that say “Accredited with Distinction.”

Both the elementary principal and the secondary principal are working on student appreciation events, to take place before the end of the semester.

MacKenzie reported in his site improvement update that the fence is nearly done around the playground. A Request for Proposal for the track and field work is due November 16.

The Veterans’ Day assembly will be held on Thursday, November 9, at 9:30 a.m.

The Thanksgiving luncheon with Gilpin senior citizens is scheduled for Thursday, November 16, from 11:00 a.m. to noon.

MacKenzie had made an e-rate application for bigger backup batteries, improved access points for wireless, and reimbursement for a portion of the fiber optic Internet cost.

The October student count was 490. Full funding will be for 438.5 students. There is no funding for preschool, and only half funding for kindergarten.

The Board plans to hold its next meeting on Saturday morning, December 2, at the Colorado Association of School Boards (CASB) Conference, rather than on December 5 as previously planned. The last meeting for 2017 will be held at the school on Tuesday, December 12.

END_OF_DOCUMENT_TOKEN_TO_BE_REPLACED

Benefitting the county, schools, and much more By Don Ireland   This year marks the 30th anniversary of casinos opening in the former little mining towns of Black Hawk, Central City and Cripple Creek, Colorado. In those early years, smoking was allowed inside ... END_OF_DOCUMENT_TOKEN_TO_BE_REPLACED