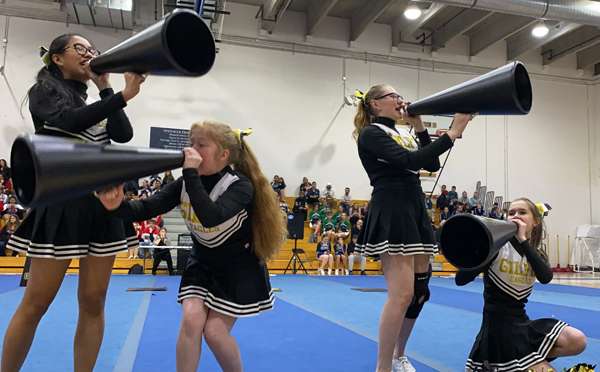 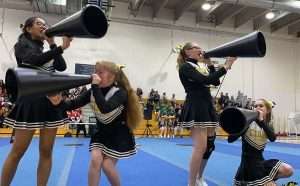 The Gilpin High School Cheer Competition Team, a program added last year, made their debut at the Frontier League Spirit Championships hosted by Pinnacle High School last Saturday, November 14th. Cheerleaders arrived at the high school with strong intention towin. They had very high expectations, especially since they were competing against 5A schools, and much bigger teams.

After a quick meal, glam moments, and bonding time, cheerlead squads practiced in one of the many hallways. The competition began with Poms, or dance cheer, followed by Co-Ed, All Girl, and Game Day cheers. Game Day, newly recognized by CHASA, is a cheer performance that we would see in any ordinary football team. Patiently watching two divisions, the Gilpin girls waited for their designated warm-up time and performance. Leaving halfway through the All Girls division, they practiced cheers, signs, and megaphones – all incorporated in their stellar performance.

The gritty emotions and adrenaline heightened when they were called “on deck.” Dancing around, hugging, and team bonding were just some of the way the cheerleaders worked off nerves until they were called forth to perform. Starting off the Game Day division, their performance shook the audience with the school fight song, chants, and intricate dancing. Gilpin fans were beyond proud of their cheerleaders. As Gilpin fan Sasha Sonsino puts it, “The Gilpin Cheerleaders did amazing! They worked incredibly hard and it paid off. The competition was exhilarating and their performance was spectacular. ”

As the anticipation grew, other great teams went, but the true winner was determined during awards. However, to build comradery, all cheerleaders participated in several line dances, like “Funky Chicken.” Following that, awards were announced and Gilpin Cheerleaders won 2nd in their division! Cheer captain Joleen Slack was also voted best cheerleader! The girls went away that night with an outstanding accomplishment and were on fire for the state cheer competition in December. 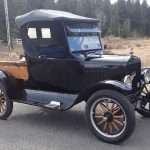 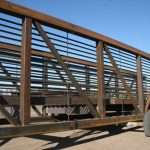