Check out the Gilpin History Museum 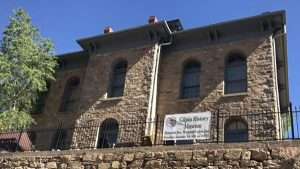 Open for the Summer

Overlooking the City of Central and Black Hawk stands a large stone building. At 228 1st High Street (appropriately named) is the Gilpin History Museum. This 3-story building is only open in the summer because when the building was built, originally a school house, there was no indoor heating other than fireplaces. It is now open from Tuesday through Sunday from 10 am to 4 pm until Labor Day.

Alan Demers gave me a tour, and this museum has many items that are not found anywhere in the world.  The tour starts in the front yard. It has a large wooden water pipe from Black Hawk, a work car from the 26 miles of narrow gauge rail lines that once crisscrossed this valley, and an “ice saw” that you can see in the photo.  The ice saw is Alan’s favorite because it tells a story of how people preserved their food before the time of electricity and refrigerators. They would literally cut the ice from the frozen Missouri Lakes in Black Hawk and haul it to resident’s homes or establishments. This was also before “safety glasses” or “thermal coolers.”

Gilpin’s Museum also has one of the original “stampers” which pounded out the ore and separated the gold from the junk. Demers said there were hundreds of them running 24/7 and the “noise was deafening.” Black Hawk was known by the nickname “City of Mills,” and Central City was nicknamed the “Richest Square Mile on Earth.” Of course that was during the 1860-1880’s.

Alan and several other volunteers help make the History Museum what it is today – a 5-star museum with a great reputation. Alan often gives tours and lectures to children, and that morning he had a large group of about 50 elementary age kids from Jefferson County. Children of all ages find the museum full of wondrous scenes from years past.

The museum grows better each year. If you visited last year, you would see many improvements. On the first level is the infamous local submarine (Neptune) which has a story of its own, too long to share here. The opposite side shows what the town probably looked like in the late 1800’s. It has store fronts, a doctor’s office, a post office, a saloon, and various replicas of town life.

Up the beautiful stairs you see murals of the Teller House and charming billboards. The school room is complete with desks, chalkboards, and student cut-outs. The Victorian jewelry display is rich with fancy, ornate hair paraphernalia. And if we think contemporary hair gadgets are elaborate, you should see the strange things ladies used to make those curly curls. Not to mention the binding undergarments that made women look like their waists were 10 inches round. That area also shows what a typical parlor and bedroom looked like, complete with washtubs and other luxuries.

The Black Hawk Fire Department is featured with its original horse-drawn fire engines, modern for its day.  Various gear and ribbons from all the fire departments that prided themselves in their strength competitions and much fun.

A large school bell from Nevadaville, more mining displays, and many antiques make history come alive for the visitors to this fantastic museum. One lady I spoke with said her “appreciation of Central City and Black Hawk has grown since coming here” to this museum. Another visitor loved the writings that referred to “things coming and going, but history never dies.”

My guess is everyone who comes here leaves a little wiser, a little more humbled, and a lot more in love with the history Gilpin County has to offer.

Cost is only $6, children under 12 are free. All proceeds go to support this amazing place – come check it out!

END_OF_DOCUMENT_TOKEN_TO_BE_REPLACED

Benefitting the county, schools, and much more By Don Ireland   This year marks the 30th anniversary of casinos opening in the former little mining towns of Black Hawk, Central City and Cripple Creek, Colorado. In those early years, smoking was allowed inside ... END_OF_DOCUMENT_TOKEN_TO_BE_REPLACED

Benefitting the county, schools, and much more By Don Ireland   This year marks the 30th anniversary of casinos opening in the former little mining towns of Black Hawk, Central City and Cripple Creek, Colorado. In those early years, smoking was allowed inside ... END_OF_DOCUMENT_TOKEN_TO_BE_REPLACED