Changing speed limits in Central City not so simple 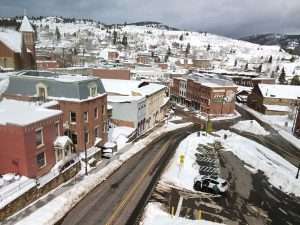 Mayor Fey led the Pledge of Allegiance and then asked for any amendments or additions to the evening’s agenda. Attorney McAskin added a third topic to the Executive Session regarding the potential lease of City-owned property.

The Mayor called for a motion to approve the consent agenda which consisted of the minutes from the March 2 meeting, the regular bill lists through March 2, and Resolution 21-09 which would amend the adopted 2020 Budget, specifically the Public Safety Fund. Alderwoman Laratta moved to approve the Consent Agenda and was seconded by Alderman Aiken. The motion passed unanimously.

The Council considered approval on one Resolution and one Ordinance.

A Little Pocket of Sunshine for the Belvidere

Community Development Planner and Main Street Advisor Lisa Roemhildt introduced Resolution 21-10 which would authorize the City Manager to execute a contract with Agave Landscapes and Masonry for the Belvidere Pocket Park. The cost of the park is paid for by a grant of $50,000 and a City matching amount of ten percent or $5,000. Funds for the Belvidere Pocket Park are set aside and part of the 2021 Budget. The project includes retaining wall stabilization, entry steps, patio, walkway, benches, and signage.

Attorney McAskin introduced the first reading of Ordinance 21-02 which would establish an administrative procedure to address alleged municipal campaign finance complaints and violations. This Ordinance establishes a procedure for the City Clerk to handle allegations. The State of Colorado recently passed a law, Senate Bill 19-232, which changed the complaint process from being submitted at the State level to being submitted at the local municipal level. Attorney McAskin stated that most of the home-rule municipalities have adopted similar motions aligning themselves with the State law.

Alderwoman Laratta moved to approve the first reading of Ordinance 21-02 and set the public forum and second reading for Tuesday, April 6, and was seconded by Alderman Aiken.

Mayor Fey argued that the City should not be responsible to take on the financial and time burden of investigating complaints and was not for passing this Ordinance. Manager Miera responded that the process is not very complex or cumbersome. The motion passed unanimously.

Manager Miera updated the council on speed limits on the Central City Parkway and COVID-19 re-entry guidelines. Unfortunately, the sound for the virtual Zoom meeting was not optimal and much of what he said was not decipherable.

Regarding re-entry guidelines for the pandemic, Miera stated that one of the driving forces is whether all people eligible for vaccinations have access to vaccinations (whether or not they choose to be vaccinated) and that time “is coming soon.”

Regarding speed limits, Miera stated that they would have to do another study, so future changes would depend upon whether they can get a grant for the study. He talked about the necessity to do a study even if they are considering reducing the speed limit. Director Sam Hoover commented that the City does have some flexibility on City streets (without a study), but changes would still need an engineer’s approval. For example, they dropped the speed on Spruce Street from 20 mph (he believes) to 15 miles per hour. He said the normal change seen is in 5 miles per hour increments. Mayor Fey commented he would be in favor of dropping all speed limits in the City to 15 mph without a study. Director Hoover warned “you may pay tens of thousands of dollars in legal fees if you do something arbitrary.” Sheriff Armstrong commented that he believes 20 mph would be a reasonable speed through town, although there are some areas that could justify something slower. He also agreed with Director Hoover that changing the speeds without due process could lead to challenges to enforcement.

END_OF_DOCUMENT_TOKEN_TO_BE_REPLACED

Benefitting the county, schools, and much more By Don Ireland   This year marks the 30th anniversary of casinos opening in the former little mining towns of Black Hawk, Central City and Cripple Creek, Colorado. In those early years, smoking was allowed inside ... END_OF_DOCUMENT_TOKEN_TO_BE_REPLACED

Benefitting the county, schools, and much more By Don Ireland   This year marks the 30th anniversary of casinos opening in the former little mining towns of Black Hawk, Central City and Cripple Creek, Colorado. In those early years, smoking was allowed inside ... END_OF_DOCUMENT_TOKEN_TO_BE_REPLACED