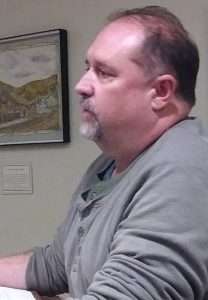 Mayor Fey called the regular council meeting to order at 6:00 p.m. on February 19, and the Council immediately went into executive session for legal advice regarding proposed amendments to 1999 Growth IGA and questions related to collecting delinquent sales and use taxes.

Mayor Fey led the Pledge of Allegiance and then asked for any amendments or additions to the evening’s agenda. There were no additions or amendments to the agenda. Manager Miera replied that there were items in the Executive Session that were not completed and so it will be continued and suggested inserting it after the second Public Forum and before the adjournment. Alderwoman Laratta moved, “as to what Daniel (Miera) just said,” and was seconded by Alderwoman Mitchell.

The Mayor called for a motion to approve the consent agenda which consisted of the minutes from the February 5 meeting and regular bill lists through February 12.

Mayor Fey asked about an $800 payment to Allied Towing for a public works vehicle. Director Hoover reported that a snow plow had broken down and it cost $500 just to hook it up to a truck. “That’s what you are looking at with the large vehicles.” Mayor Fey then asked about an $8,400 payment to Ideal Fencing Corp for a damaged guardrail on the Parkway. Director Hoover responded that the damage was from a Gilpin Ambulance Authority (GAA) vehicle and the GAA has already given the City a check for the estimate. The actual repair was the amount of the estimate so it is a wash for the City. Alderman Aiken asked about a payment to Philip Headrick for a Silver Creek Fire Department reimbursement. Manager Meira replied that when fire volunteers are called in from another jurisdiction, there is a compensation that they pay. The funds are received through the State of Colorado from the general fund. Mayor Fey then questioned a payment to Sophie Openheimer for Rapid Food Assessment – Live Well Grant. Fey said he understands the grant money is covering it, but asked if they will get the results of the survey. Manager Miera replied that the survey was done to determine fresh food resources in the County and City, and a work session is planned for March 5 when the consultants will give a presentation.

Mayor Fey attempted to move on to the Public Forum, but was corrected by Alderwoman Laratta who moved to approve the Consent Agenda and was seconded by Alderman Aiken. The motion passed unanimously.

Attorney McAskin reviewed the second reading of Ordinance 19-02 which would amend the Municipal Code to establish a citation procedure for addressing specified violations of the Municipal Code adding a new Article X to Chapter 2 titled “administrative Penalty Citations for Code Violations.” McAskin continued that notice for the public hearing was not published by the Weekly Register-Call which means they are unable to hold a public forum. “I recommend a motion to continue the public hearing to March 5.”

Alderman Aiken moved continue the public forum for Ordinance 19-02 to March 5 and was seconded by Alderwoman Laratta. The motion passed unanimously.

Utilities Director Jason Nelson introduced Resolution 19-06 which would declare the water diversion structures project finished and authorize the final payment to Dietzler Construction with preliminary approval by the Council. Jason reported that the final cost came in under the bid and the workers at Dietzler’s “were maniacs, they were really good, they were great professionals.” Nelson continued saying that quality is good, and the engineers approved. Alderman Aiken stated, “that was a tough road up there, I was amazed they got the equipment up there.” Manager Miera asked for clarification from Nelson that the contractor had to construct an access road and then deconstruct it upon completion, which Nelson confirmed. Alderman Hidahl asked about the language of “preliminary approval” and inquired if there was more to be done. Attorney McAskin responded that the project itself is finished, but there is a one-year warranty and as that gets close to expiring, City staff will meet with the contractor for inspection and to go over any items that need repairing or adjusting. At that point, the project will be final and will receive final approval.

Alderwoman Laratta moved to approve Resolution 19-06 and was seconded by Alderman Aiken. The Resolution passed unanimously.

We Will Not Be Judged by Another

Attorney McAskin introduced the first reading of Ordinance 19-03 which would make explicit that the City of Central is not subject to the jurisdiction of the Independent Ethics Commission (IEC) or the ethics provisions of Article XXIX of the Colorado Constitution. The IEC has been trying to expand its jurisdiction in the past several years even though there is an exemption for home rule municipalities. They indicted the mayor of Glendale, Mike Dunafon, and the case went to the district court. The Court ruled in favor of the mayor with Judge Edward Bronfin stating, “Home rule prevails whether the ethics code is more, equal, or less stringent” than Amendment 41. This Ordinance provides clarity that the IEC does not have jurisdiction over the City of Central. Section 2-4-60 removes the phrase “or under the laws of the state of Colorado” which could have potential to give the IEC jurisdiction. Alderman Aiken asked, “Will we be policing our own ethics?” McAskin replied, “Correct, and I think that’s truly the intent of the City Charter.” An ethics ordinance was adopted by the City in the late 90s.

Alderman Aiken moved to approve the first reading of Ordinance 19-03 and set the second reading and public hearing for March 5, 2019 and was seconded by Alderwoman Mitchell. The motion passed unanimously.

Director Ray Rears reported that the Live Well Grant was awarded last year and there will be two consultants to present their findings at a work session prior to the next meeting on March 5 (likely to be scheduled for 6:00 p.m. the same day). The grant amount was $3,500, and the City used $3,000 to pay the consultants leaving $500 for their own administrative costs.

Alderman Aiken comment that, “The City did a good job on the Parkway with the recent snow.”

Alderwoman Laratta commented, “I got so excited about being alive last meeting, I forgot to thank Reba (Bechtel) and Daniel (Miera) for all the help you gave me in my absence. Thank you very much.”

Alderwoman Mitchell stated she is “excited about the Live Well survey to see what they say.”

Adlerman Hidahl reported he noticed at the post office a very nice notice that said something to the effect of “Be nice – shovel your sidewalk.” He thought it was very well done; it had the right tone, humor, and gets the point across. “A terrific example of thinking outside the box that furthers the goal without having to adopt ordinances.” Hidahl then mentioned he would like to schedule another retreat to conclude unfinished business from the prior retreat including a look at visioning, so the City staff knows what Council is thinking. He then said, as an observation, that “It’s increasingly difficult to find contractors to do work in Central; I am wondering if there is something the City can do to encourage experienced contractors?” He continued with, “we have a lot of infrastructure issues that will be the burden of the homeowner; trees, walls, sewer lines, etc.” Alderwoman Laratta reported she had a lot of trouble finding a contractor for a 3-foot section of sewer line that she had to replace. It ended up costing her $12,000 and she feels that she was over-charged for the simple reason that it was the only contractor she could find to come up to Central and do the work. She stated that she owns three feet of the district sewer line now.

Mayor Fey said he did not start the evening with a comment, but wanted to respond to Hidahl and Laratta. “The resolution to these issues can be remedied with some commercial and residential development; while it won’t help tomorrow and will not immediately solve current issues, but if we had more rooftops and activity, we would have more contractors as well.”

Mayor Fey opened the floor to the public for anyone who wished to speak to the Council on any items not on the agenda. No one chose to address the Council at that time.

END_OF_DOCUMENT_TOKEN_TO_BE_REPLACED

Where the dead get to tell their story By Jaclyn Schrock On Saturday, August 21, the Gilpin Historical Society held their annual Cemetery Crawl. Tickets allowed the shuttle of hundreds of guests from the Teller House parking lot to the Cemetery. Depending on v... END_OF_DOCUMENT_TOKEN_TO_BE_REPLACED

Benefitting the county, schools, and much more By Don Ireland   This year marks the 30th anniversary of casinos opening in the former little mining towns of Black Hawk, Central City and Cripple Creek, Colorado. In those early years, smoking was allowed inside ... END_OF_DOCUMENT_TOKEN_TO_BE_REPLACED