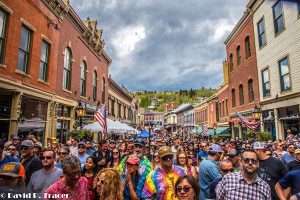 Getting down with some New Orleans Funk!

Presented by Big Easy and Central Presents, Central Jazz is the revival of the Central City Jazz Festival, which ran continuously from 1976 through 1992. Expanding to two days in 2019, the festival had four stages and numerous bands over June 7th and 8th. Once again, we’re pleased to have jazz legends of New Orleans and Mardis Gras-style attractions presented in the historical streets of Central City. This picturesque home of the Colorado gold rush hosted music on both days of entertainment, including late night sets at the Teller House and open jams in the Grand Z Hotel. Experience great food, unique shopping, fine arts, and more. An initial lineup was led by Dumpstaphunk, The New Mastersounds, George Porter Jr. Runnin Pardners, Melvin Seals and JGB, New Orleans Suspects, Michal Menert Trio, The Jauntee, and The Copper Children in addition to special performances from the NOLA Central All Stars and the Color Red Allstars (featuring Eddie Roberts, Jeremy Salken, and Gabriel Mervine).

Central Jazz Fest took place in various locations throughout the picturesque mountain town, spilling into the downtown streets in addition to venues like Grand Z Casino and the Teller House, where the festival hosted open jam sessions for its talented roster of artists.
Central Jazz kicked off this past Friday with Dumpstaphunk and so much more. Everyone was sure to catch Joey Porter, Tony Hall, Dave Watts and Ian Neville.
Saturday opened the day with a Second Line through the streets of Central City with a Crawfish Boil and vendors and a whole lotta music. The weather was looking mighty fine so friends grabbed their friends, made a plan and kicked off the summer with some down and dirty New Orleans Funk! Melvin Seals and JGB set the vibe right there dancin’ in the streets! New Orleans Suspects hit the stage around 4:30 celebrating life, music, and friends. Following all that was the Central Jazz after party Saturday night with Color Red Allstars (Eddie Roberts, Jeremy Salken, Gabe Mervine) and The Jauntee!

What a weekend!  A big ol thank you goes out to all who attended Central Jazz 2019. We hope you all had as much fun as we did. Story and photos courtesy of Central Jazz at www.centraljazz.co.

END_OF_DOCUMENT_TOKEN_TO_BE_REPLACED

Benefitting the county, schools, and much more By Don Ireland   This year marks the 30th anniversary of casinos opening in the former little mining towns of Black Hawk, Central City and Cripple Creek, Colorado. In those early years, smoking was allowed inside ... END_OF_DOCUMENT_TOKEN_TO_BE_REPLACED