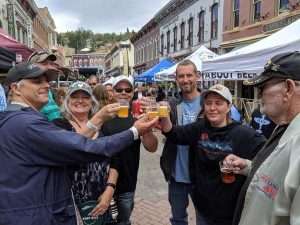 Brewers and patrons weigh in on favorite festival and brews

The Great Central City Beer Fest transpired on Saturday, August 24 where twenty local brewers erected tents along Main Street and tapped their chosen varieties for guests to sample. Colorado is home to the Great American Beer Fest (GABF); the largest ticketed beer festival in the United States and one of the largest in the world.GABF started in 1982 in Boulder, Colorado with 22 breweries and today attracts thousands of breweries from over the world and more than 60,000 attendees. In contrast, the Central City Business Improvement District introduced the Great Central City Beer Fest eight years ago which has grown to about twenty breweries and hundreds of attendees. The Central Beer Fest will never be much bigger without changing venues, but that’s just the way the brewers seem to like it. Asking each brewer which event is better, the majority did not hesitate to say Central City has the better festival. The GABF gives brewers the opportunity to win awards for their products, see friends from outside the state, and taste beers from around the world that they would not normally have access to. However, GABF also tends to be overwhelming, does not allow brewers to have conversations with people sampling the beer, and most attendees don’t seem to care about the beer, all in all not a great venue. Central City; on the other hand, is a low-key, intimate setting with a better crowd. Steve Fletcher of Colorado Native says he “loves coming to this festival, the people are great” and he gets to hang out with his “brewing buddies.” Tom Hail of the Sandlot Brewery says Central City has “better people” and you can “hold a conversation” with the attendees. John Law of New Terrain Brewing hesitated to say Central City was his favorite because, “If it were warmer, it would be better.” The day started mostly cloudy and stayed in the mid-60s until the mid-afternoon when it warmed up to the 70’s, but the sun barely made an appearance before the cold shadows enveloped the street.

A giant stage on the north side of the street welcomed Professor M (a Motown to Memphis cover band) and Jewel & the Rough (a classic rock and roll cover band). On the south side in the VIP tent is the local Jimmy Lewis Experience band throwing out covers of classic rock and country tunes for the VIP patrons as they ate food catered by JKQ BBQ and sampled brews not available on the street. Sandwiched between the bands and beers are local vendors and non-profits with plenty of food and goods to offer. The festival has become an annual tradition for several people. Terry, Trina, Troy, Ron, Garry, and Brenda from Denver and Arvada camp together at the KOA Campground and come to the festival every year. Their favorites are Nederland’s Very Nice Brewing, Ciera, and Dostal Alley. Ciera Brewing is venturing into new territory by brewing non-alcoholic THC infused beverages that taste like beer and have the effects of THC. A Denver group, Training for Warriors, keep coming back to Central because the Beer Fest is “fun and great!” Their favorite is Ohm Brewing and their ginger crème ale. Chris Bost from Parker, Colorado, stumbled upon the event while camping in Columbine Campground and his favorite brew is the Favorite Blonde from Hollidaily. The gluten-free beer tastes, “as good as beer” and “is the best beer here” according to Chris.

The Central City Beer Fest is a favorite event and will be back next year.

Coming in September is the Hot Rod Hill Climb featuring hundreds of vintage classic cars, and the Plein Air Art Exhibition with a select group of fine artists literally painting the town. October will feature the popular Creepy Crawls and the premiere of the Central City Opera Poetry Festival.

END_OF_DOCUMENT_TOKEN_TO_BE_REPLACED

Benefitting the county, schools, and much more By Don Ireland   This year marks the 30th anniversary of casinos opening in the former little mining towns of Black Hawk, Central City and Cripple Creek, Colorado. In those early years, smoking was allowed inside ... END_OF_DOCUMENT_TOKEN_TO_BE_REPLACED

Where the dead get to tell their story By Jaclyn Schrock On Saturday, August 21, the Gilpin Historical Society held their annual Cemetery Crawl. Tickets allowed the shuttle of hundreds of guests from the Teller House parking lot to the Cemetery. Depending on v... END_OF_DOCUMENT_TOKEN_TO_BE_REPLACED