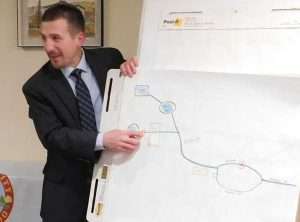 Central City Council met with Staff for a Work Session at 1:00 p.m. on Tuesday, January 15, 2019, and again at 4:30 p.m. the same day. They discussed revisions to the snow removal program, a telephonic participation policy, CIRSA public officials’ liability, and Council orientation.

Mayor Fey called the regular council meeting to order at 6:00 p.m. on January 15; and the Council immediately went into executive session for legal advice on specific legal questions related to water.

Mayor Fey led the Pledge of Allegiance and then asked for any amendments or additions to the evening’s agenda. Manager Miera requested an informational session be added after the consent agenda to report on the water main break.

Mayor Fey asked if there were any conflicts of interest for any member of the council. Alderman Aiken replied he might have conflict of interest on the snow removal ordinance. “I have been doing snow removal for Ren Goltra and I am not sure if it is a conflict,” said Aiken. Manager Miera responded that if you disclose the issue, there is not the appearance of impropriety. Mayor Fey stated “I see it as aligned interest.” Alderman Hidahl remarked, “I see no conflict.”

The Mayor called for a motion to approve the consent agenda which consisted of the minutes from the January 2nd meeting and regular bill lists through December 28th. Alderman Aiken moved to approve the Consent Agenda and was seconded by Alderman Hidahl. The motion passed unanimously.

Manager Miera addressed the council regarding the water main break that disrupted water service the Central City on Friday, January 11, 2018 which lasted into Saturday afternoon. Manager Miera, along with Director Nelson and Water Treatment Specialist Jack Beard, presented a series of hand-drawn maps to help illustrate the incident. Beard drove by the break area at 6:40 a.m. on Friday morning seeing no issues, but received a call at 6:45 a.m. reporting there was a four-foot fountain of water coming out of the ground in the 300 block of Eureka Street. The water was shut off at approximately 7:00 a.m. affecting the entire town. The only booster pump, supplying water to the KOA Campground and Gold Mountain Village Apartments, was also shut off to prevent the pump from burning out. The rest of the water system is gravity fed and pressurized. The City used JBS Inc (not the food processing company) for the repairs as they were contracted to complete repairs to leaks at Packard Street and Main and Lawrence Streets. Although JBS Inc. was used, scheduled repairs to the known leaks were not completed to prevent continuing delay of water services to the town.

Alderman Hidahl commented, “I had the opportunity to stop by the break site and City Hall and I was very impressed. This was not an event that happened during optimal circumstances. I was impressed not only with the water department’s response, but JBS was timely and creative. They couldn’t get their equipment up because of the snowstorm, but found another method. At City Hall; clearly it was all-hands-on-deck. A big shout out is necessary for the volunteer fire dept; they were involved every step of the way. Daniel you are to be commended.” Alderwoman Mitchell first applauded and said, “I thank you Daniel (Miera and Staff) a lot.” Manager Miera responded that he couldn’t do it without his Staff; “It was this crew and team. A great community effort.” Alderwoman Mitchell replied, “I think this all speaks volumes as to what our City can do.”

Mayor Fey opened the floor to the public for anyone who wished to speak to a topic on that night’s agenda. One resident addressed the Council thanking them for how they responded to the water main break and how information was communicated to the community.

Mayor Fey inquired, “Explain why we are not giving voting rights?” McAskin clarified that we are giving voting rights on ordinances, consent agendas, etcetera, but when we are in a quasi-judicial situation and there are materials that cannot be seen by the person on the phone, they could not vote on those matters.

Alderman Hidahl moved to approve Resolution 19-03 and was seconded by Alderman Aiken. The Resolution passed unanimously.

Director Rears introduced the first reading of Ordinance 19-01 which would amend the Municipal Code regarding snow removal and the requirements for removing snow and ice from city sidewalks, busy sidewalks, addressed in Central City style. The rule is that snow must be removed from walkways six hours after an event (storm) ends, however, no enforcement mechanism is clear. Ordinance 19-01 adds language that walks must be continuously clear after the event and fines will be imposed if the Ordinance is not followed. Liable people are property owners and/or tenants. A notice would be posted on the property after six hours and if the walks are not cleared by the time the City comes to clear them, a fine is imposed. The first fine of the snow season would be $100, the second fine would be $250, and the third and future fines would be $500 per incident. The fine would impose a first lien against the property. Rears finished by asking for direction from Council if the Ordinance is acceptable as written or what revisions they would want to see. He then reviewed suggestions during the work session earlier in the day: reducing fines for residential properties by 50 percent which would be done by zoning districts; clarifying “hazardous events,” determining liable individuals, and staff requirements for implementation and enforcement. Rears then suggested changing the fine from a first lien to an assessed lien to be collected with property taxes.

Attorney McAskin reminded the Council that an assessment lien would mean certifying the fines in November, possibly eleven months after the incident for the fine.

Alderwoman Mitchell stated, “I think it would be important to do that (assessment lien) because a property lien may not be collected for years, so 18 months sounds a lot quicker.”

Alderman Hidahl ruminated, “I am wondering if it would confuse things to do both a lien and an assessment lien?” That way if a property is sold before the next tax assessment, the lien would be there. Attorney McAskin responded that he thinks it would be preferable to do the assessment lien. “I think there is more certainty, especially with commercial properties for those fees to be collected.” Alderman Hidahl then stated, “When I look at an Ordinance, I try to look at it with a fresh set of eyes as if I know nothing about it” in order to determine clarity. The action steps are not clear up front in the Ordinance and he suggested that the fines should appear before the abatement process. “That way it’s not just in the middle of a paragraph. I am wondering what happens if I don’t shovel my walks and I pull this ordinance, I have to look pretty far to learn I am going to be fined.” Hidahl then emphasized his opinion that commercial areas should have greater fines because when a commercial area is unkept, it creates a situation for a liability to the City and the property owner. For residents, “I don’t want to make them criminals. I don’t want to create a liability for a homeowner that is out of proportion for their responsibility.” Alderman Aiken responded, “I think if we put little areas where these rules don’t apply, it gets really messy.” Hidahl said, “If a property is zoned commercial, a fine applies, and if it is zoned residential, a lessor fine applies; I don’t think that’s unreasonable.”

When Mayor Fey called for a motion, no one volunteered to make a motion. Mayor Fey reminded Council that this is a first reading, and this does not reflect approval, just the desire to take it to public forum and a second reading. Alderman Aiken moved to approve the first reading of Ordinance 19-01 and set the second reading and public hearing for Tuesday, February 5, 2019, and was seconded by Alderwoman Mitchell. The motion passed unanimously.

Alderman Hidahl commented, “I want to commend staff for moving so quickly in putting together things on snow removal. I think this moves us in a direction consistent with the ULI report. There are a lot of little steps we can take. There is a lot of trash in this town. There is a tire next to the McShane building that’s been sitting there for a long time; there is a pallet leaning next to another building. A bank is clean inside and outside and customers are not going to walk into it if they don’t maintain its appearance.” Casinos are like financial institutions and should appear the same way. “There is a property we could do something about that we own, and if (Alderwoman) Judy Laratta were here, she would be dancing on the tables. I think the Belvidere Theatre would be a place to start.” Hidahl suggested they can repair some broken windows, so it looks less derelict.

Mayor Fey reported that commercial property owner Ren Goltra is asking if a parking study has that been completed. Manager Miera responded that the process was started, and the initial piece was completed back in December. The City is working with the contractor to finish that process and another count will be done in the summer. “If it were to be concluded right now, the results would probably not be what Goltra is looking for.”

Mayor Fey adjourned the regular meeting at 8:48 p.m. The next regular Council Meeting will be Tuesday, January 15, 2019.