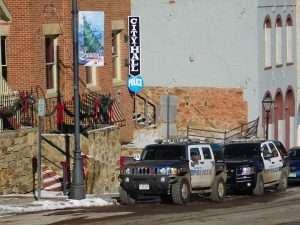 PRESS RELEASE – In mid-2015, the Central City Police Department (CCPD) initiated discussions with the Gilpin County Sheriff’s Office (county) regarding supplemental law enforcement services by contract. Discussions have continued since that time and most recently a viable option/solution was presented to the City of Central (“City”) for consideration. The City has decided to move forward with this proposal and contract law enforcement services with the Gilpin County Sheriff’s Office.
Daniel Miera, City Manager for the City of Central states, “As a city manager, it is a necessary part of my job to continually monitor and evaluate the efficiencies and effectiveness of all city operations and to explore and identify alternative solutions where adjustments are required. It is commonplace in the public sector that we are challenged with the task of doing more with less. In an environment where fiscal responsibility is at the forefront of any service operation, especially with respect to public funds, it would be irresponsible for the City to ignore an option that could provide increased service levels at a decreased cost to the city. Although this is a prudent and fiscally responsible business decision, it is not without heavy hearts that this decision was made.”
Sheriff Bruce Hartman and Manager Miera are both in agreement that a strong public safety program is a vital part of law enforcement duties. Both agencies are committed to further developing community partnerships and identifying with the citizens to determine and meet their needs.
“The sheriff’s office has a good handle on community policing,” said Sheriff Hartman. “We are very involved in the community and our School Resource Officer is a one example of that. We look forward to continuing the relationships that Central City Police Department has built with its citizens and will work hard to earn their trust in us.”
“Central City is a big part of Gilpin County since it is the county seat, and as such, the sheriff’s office is already invested in the City and its citizens,” said Hartman. He continued, “The Central City Police Department and the Gilpin County Sheriff’s Office have historically worked well together so we anticipate the transition to go smoothly. We don’t want to take their identity away and so we’ll continue utilizing their vehicles with their current markings.”
The City and County are currently working on the Inter-Governmental Agreement, but it has not been finalized. Daniel Miera stated, “We will take into consideration a time frame that will provide the greatest amount of notice to all impacted employees; design a seamless and uninterrupted transition; and maintain as much of the City’s identity as possible. Citizens can be assured that the police department will continue fully functioning during this transition time with no lapse in law enforcement services.”
“Although this has been a very difficult process and decision for all involved, we see this as a ‘win-win’ for the community as a whole as well as for both agencies,” said Miera.

END_OF_DOCUMENT_TOKEN_TO_BE_REPLACED

Where the dead get to tell their story By Jaclyn Schrock On Saturday, August 21, the Gilpin Historical Society held their annual Cemetery Crawl. Tickets allowed the shuttle of hundreds of guests from the Teller House parking lot to the Cemetery. Depending on v... END_OF_DOCUMENT_TOKEN_TO_BE_REPLACED

Benefitting the county, schools, and much more By Don Ireland   This year marks the 30th anniversary of casinos opening in the former little mining towns of Black Hawk, Central City and Cripple Creek, Colorado. In those early years, smoking was allowed inside ... END_OF_DOCUMENT_TOKEN_TO_BE_REPLACED