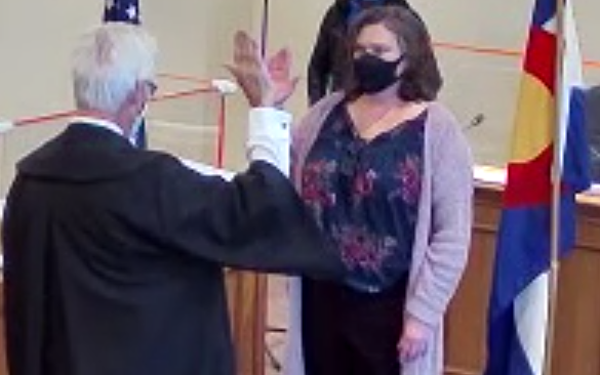 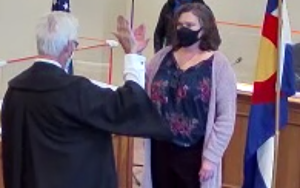 Tinucci sworn in, and Young family gets their land back

I So Solemnly Swear…

Mayor Fey led the Pledge of Allegiance and then asked for any amendments or additions to the evening’s agenda. A work session was proposed to be added to the end of the meeting to discuss an RFP for Scarlett’s.

The Mayor called for a motion to approve the consent agenda which consisted of the minutes from the December 15 meeting and regular bill lists through December 22. Alderwoman Laratta moved to approve the Consent Agenda with the comment “we kept our bills way down this month,” and was seconded by Alderwoman Tinucci. The motion passed unanimously.

Mayor Fey opened the floor to the public for anyone who wished to speak to a topic on the night’s agenda. Three people chose to speak to Council.

David Josselyn for the Weekly Register-Call referenced a payment of $8,000 for the live streaming of the Cody and Shelby Allen memorial service and asked what budget line item it would hit. Manager Miera responded it would come from the public safety fund and they can submit for reimbursement.

Joe Behm, Executive Director of the Business Improvement District next addressed Council saying, “Your oath of offices is a peaceful transition of power and was handled without conflict,” contrasting this with the national stage. He then gave his congratulations to Alderwoman Tinucci saying, “You’ve got a job to do and do it to the best of your abilities. Look to policy with lots of thought and I know you’ll do a great job.” Behm then congratulated Alderman Aiken saying, “I think everyone appreciates you running for a second term.” Finally, Joe thanked Alderman Hidahl saying, “Thank you for your service as a public official; he knows politics very well; he was a really experienced light to the community.” Behm followed his remarks with, “God speed for 2021.”

Bill Porter (from Atlanta), next addressed Council saying, “I do wish everybody a Happy New Year; as it relates to Georgia, I find it comforting for the cycle to end here tonight.”

The Council considered approval for nine annual appointments, two appointments to commissions, one certification program, four Resolutions, and one Ordinance.

Legal Publication for 2021 – the Weekly Register-Call

Planning Commission Appointments (three seats) – Barbara Thielemann, Dena Hunter, and Michele Roussel. One applicant, Michael Krapish, was not approved for the reason of being a short-time resident relative to the other applicants. He was encouraged to continue to participate in the City.

Manager Miera reviewed a motion to support the formation and operation of a 5-Star State Certification Program related to COVID-19 safety protocols. This program encourages businesses to implement safety measures beyond what is already required by public health orders that will help slow the spread of COVID-19. Businesses certified by the program may be eligible for less restrictive capacity limits than those not participating in the program. Certification of business would require additional measures such as a business-specific plan for outbreak detection, reporting, and response; enough quality ventilation, exposure notification service promotion; and other items. Although most requirements overlap, different types of businesses would have specific measures such as increasing distance between seated customers to ten feet for restaurants.

Gilpin County Commissioners tabled a similar measure at their meeting earlier today. Mayor Fey commented that he was online for the meeting and believed the primary reason for tabling the motion was due to the potential cost of running the program. Jefferson County was quoted as costing $300,000 to run the program. Manager Miera clarified that although Gilpin contracts with Jefferson County for the Public Health Department, each county is considered separately for COVID restriction levels. Mayor Fey commented that the casinos are doing a wonderful job already.

Jason Dunmar (sic) from Monarch Casino commented that his full-time job for the past nine months has been COVID safety in the casino. This program increases measures that they will be taking and enables more people to come back to work. “We are very grateful to Central City.”

Alderwoman Johnson moved to approve entry into the program and was seconded by Alderwoman Laratta. The motion passed unanimously.

City Clerk Reba Bechtel introduced Resolution 20-01 which would designate the public place for posting of notices of regular and special meetings of public bodies. No changes are being suggested, so notices will continue to be posted at the Central City Post Office, on the doors of City Hall, and online on the City’s website.

Historic Preservation and Code Enforcement Officer Lindsey Flewelling introduced Resolution 20-02 which would support the City’s application for an intensive-level survey of a residential neighborhood and support the completion of said project. The last time a survey was completed was 2014 and it did not provide detail on properties such as outbuildings or rock walls. A grant worth $25,000 is available for the project and requires a 10% matching contribution. The match can be made by in-kind expense such as Staff labor. Flewelling said they have received a letter of support from Gilpin History for this Resolution.

Alderwoman Johnson stated she is in favor of this Resolution and her time on the Historic Preservation Commission gave her experience in the problems it causes when outbuildings and other items are not included in a historic survey.

Alderwoman Laratta commented “I think this would be a good way to find out all the names of the ghosts that occupy these houses.”

Alderwoman Laratta moved to approve Resolution 20-02 and was seconded by Alderman Aiken. The Resolution passed unanimously.

IMEG In, JVA Out

Community Development Director Ray Rears introduced Resolution 20-03 which would award a professional services agreement to IMEG Corp. for on-call engineering services. The City received eight proposals to their Request for Proposal (RFP) and staff is recommending IMEG based on a scored evaluation in which they scored the highest. IMEG Corp. provides similar services to cities of Golden, Johnston, Lone Tree, and Morrison. JVA was the contracted company in 2020 but did not submit a Proposal for this year.

Alderwoman Tinucci moved to approve Resolution 20-03 and was seconded by Alderman Aiken. The Resolution passed unanimously.

Still an Emergency… Through June

Manager Miera introduced Resolution 20-04 which would extend the City’s declaration of emergency through Wednesday, January 20, 2021.

Alderwoman Johnson asked if they could extend the declaration through June instead of every meeting.

Alderwoman Johnson moved to approve Resolution 20-04 amending the date to end July 7, 2021 and was seconded by Alderwoman Tinucci. The Resolution passed unanimously.

Old Agreement for the Young’s

Director Rears introduced the first reading of Ordinance 20-01 which would approve the City vacating certain portions of the Central City Parkway. The City entered into a Roadway Dedication Agreement with the Robert Young Ranch in 2003 in which the City agreed they would give certain land back 90 days after completion of construction. This has yet to be done which is the reason for this Ordinance. Maps of the areas can be found in the meeting packet from today on the City’s website.

Robert Young addressed Council and said it’s going to be a good thing for the City and the Young Family.

Alderwoman Laratta moved to approve the first reading of Ordinance 20-01 and set the public forum and second reading for Tuesday, January 19 and was seconded by Alderwoman Johnson. The motion passed unanimously.

Manager Miera commented that Gilpin County has now gone into Phase 1b in the COVID vaccination plan which includes residents 70 and older and first responders. To get scheduled for your vaccination, call 303-515-4342. Alderwoman Laratta commented the number works “perfectly” and she is on the list and so are several of her constituents. Mayor Fey commented to “please be patient,” there are only three people providing all the health services for the County.

Alderwoman Laratta commented that the City should commemorate Cody and Shelby Allen by setting aside a day, perhaps December 10, and combine it with carbon monoxide education. Mayor Fey stated they are trying to put together a work session to talk about their options.

Alderwoman Laratta commented she misses everyone in person and as soon as she’s vaccinated, she’s “coming back with a vengeance. Happy New Year and I can’t wait to see you all again.”

Alderman Aiken commented that some casinos have lines of people waiting to get in and the casinos are doing a great job of keeping safe. Today, Famous Bonanza kicked someone out for taking his mask off.

Alderwoman Tinucci commented she’s really “happy to be here” and this will be an exciting year. “I will faithfully do my duties as best I can.”

Mayor Fey adjourned the regular meeting at 9:04 pm. The next regular Council Meeting will be Tuesday, January 19, 2021. 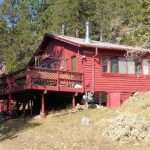 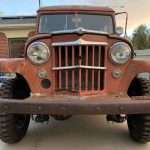 Looking for your next wrenching project?
Leave a comment