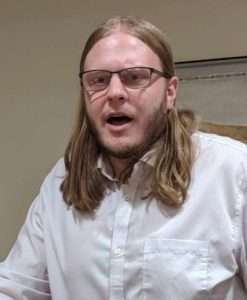 Council met with Staff for a Work Session immediately prior to the regular meeting on Tuesday, September 3, 2019. The topics covered were a report from the Walker Study Downtown Parking County, a proposed Central City Railroad and Mining Museum; and discussion regarding a statewide Family Leave Program.

Mayor Fey led the Pledge of Allegiance and then asked for any amendments or additions to the evening’s agenda. Alderman Hidahl requested Agenda Item number 11 be removed. Number 11 is a request from the Central City Opera for disbursement of funds for some capital improvements. Historically, the City has given the Opera $25,000 for their operations to spend how they see fit. In fiscal year 2018, Council put a restriction on the funds that they be used specifically for capital expenditures. Hidahl stated that Council restricted use to the preservation of properties and the capital improvements being suggested have nothing to do with preservation. Alderman Aiken, Alderwoman Laratta, and Alderwoman Johnson agreed that preservation was the Council’s intent. Mayor Fey argued that these funds are normally distributed in December, but the Opera struggles the most during the months following the summer season and distributing the funds now would be more meaningful to the Opera. Alderman Hidahl moved to remove Item 11 from the agenda and was seconded by Alderman Aiken and Alderwoman Laratta simultaneously with Alderwoman Johnson voicing her second on their heels. The motion passed four to one with Mayor Fey voting against.

The Mayor called for a motion to approve the consent agenda which consisted of the minutes from the August 20 meeting and regular bill lists through August 27. Alderwoman Laratta moved to approve the Consent Agenda and was seconded by Alderman Aiken. The motion passed unanimously.

Attorney McAskin reviewed the second reading of Ordinance 19-06 which would amend the Municipal Code regarding liquor and marijuana licensing. This is considered a “housekeeping” ordinance and would align the Code to the State’s wording. McAskin then noted that notice of the public hearing was not published with the required seven days advance notice, (it was published the prior Thursday) and so McAskin requested this be continued on the September 17 regular meeting.

Alderwoman Laratta moved to continue the second reading and public forum for Ordinance 19-06 to the September 17 meeting and was seconded by Alderman Aiken. The motion passed unanimously.

Council next considered an application for Alternate to the Main Street Commission by Shelby Ellis. Ellis lives in town and works in digital media and digital marketing. He has been working with Community Coordinator Zeke Keeler to attract businesses and to bring up a concert series to the City. Alderman Hidahl inquired, “What’s the term?” Bechtel replied that this is a four-year term. Alderwoman Johnson commented she liked what Shelby wrote in his letter of interest but did not specify which portions. Mayor Fey stated, “I think he would make a great alternate.”

Alderman Aiken moved to approve the appointment of Shelby Ellis to the position of Alternate to the Main Street Commission and was seconded by Alderwoman Johnson. The motion passed unanimously.

No Short Cuts to Records

City Clerk Reba Bechtel introduced Resolution 19-25 which would create a consistent process for responding to public requests for records. Alderman Hidahl voiced his concern that records should not be removed from the Clerk’s office or City Departments. “I’ve had experience that originals have been altered when they have been reviewed.” He suggested that supervision be added to the wording. “I think it’s a good practice.” Alderman Johnson commented that the Denver Public Library has a similar policy and “you are supervised” when reviewing restricted documents.

Alderwoman Laratta moved to approve Resolution 19-25 with the amendment that inspections must be made under supervision of City Staff and was seconded by Alderwoman Johnson. The resolution passed unanimously.

Director Hoover introduced Resolution 19-26 which would approve a change order for the Spring Street project adding a cost of $38,000. “There were things they ran into in the field that were not anticipated,’ said Hoover, which includes drainage and the removal of a stop sign in the Big-T Lot. “About once every two weeks, they have to replace that stop sign.”

Alderwoman Laratta moved to approve Resolution 19-26 and was seconded by Alderman Aiken. The Resolution passed unanimously.

Attorney McAskin introduced Ordinance 19-07 which would adopt length limitations for special vehicles on certain roadways, specifically the length of Spruce Street from Nevada Street to Moriarty Lane. “This Ordinance is crafted to retain flexibility to add other streets,” said McAskin. The Ordinance would make it unlawful to operate vehicles on Spruce Street exceeding 25 feet in length including, but not limited to buses, recreational vehicles, vehicle plus trailer combinations, or any other combination of motor vehicles and trailers, boats, and storage containers. “We do not have official feedback from JVA (engineering consultants) on the length, but will have that well before second reading,” stated McAskin. Additionally, signage will be required.

Alderman Aiken commented that “We need a bigger sign where the “GPS lied sign is,” and Alderwoman Laratta added that it “should be a billboard!” Alderman Hidahl voiced his concern that the language be more specific to include the length of Moriarty Lane since Spruce Street turns into Moriarty at the top of the hill above the Opera House. “It should read the length of Spruce Street from Nevada to Eureka,” said Hidahl. Manager Miera pointed out that it would restrict vehicle usage from the Teller parking lot back onto Eureka including the Opera buses and delivery vehicles. Hidahl replied that he understands the City Manager’s point, but the hill on Moriarty needs to be covered. “It’s really a question of what a judge would think” said Hidahl. He continued that his primary concern is trailers. The grade of the hill would put unnatural force on the hitch that is was never meant to withstand.

Alderman Aiken moved to approve the first reading of Ordinance 19-07 and set the second reading and public forum for Tuesday, September 17, and was seconded by Alderwoman Johnson. The motion passed unanimously.

Alderman Hidahl asked about the façade repaint project stating he was concerned that the mason, or whoever the contractor will be, should be available to our downtown community and added that the new Code Enforcer could encourage our building owners to consider using their services. Director Ray Rears responded that the Request For Proposal has gone out and once a consultant has been selected, the City will be asking them to consider being available to other commercial or residential projects.

Mayor Few asked about two new event applications in Event Marketing. Director Rears responded that they are in the very beginning stages, but they refer to Community Coordinator Keeler working with Black Hawk Gaming to have some events in Central City that could support both cities. Newly appointed Shelby Ellis corrected that, stating that he and Keeler are working with a third party, Sparta Sports and Entertainment, to bring a concert series and other events up to both cities.

Alderman Aiken commented, “I like the work Sam’s (Director Hoover on the Spring Street Project and sidewalk projects) been doing; it’s really been a great improvement.”

Alderwoman Laratta commented, “I think it’s a dirty rotten shame that the rest of the world thinks we (Central City residents) are Mars, Juniper [sic], or Venus, or a planet. Everything you try getting done up here is like pulling teeth!” Laratta is referring to any contract work; landscaping, construction, etc. “I think we need a posse or something to go to Golden and convince businesses to come up here.”

Alderman Johnson commented that since she was absent for the last meeting, people have been asking her where she stands on the issues discussed during that meeting. Regarding the staircases; “I think we should repair them.” Regarding the acquisition of the property formerly known as Scarlet’s Casino; “I think Scarlets is a great investment.” Johnson then commented “I think we need to get away from ‘giving’ money and instead investing in the City. We are not a charity.”

Alderman Hidahl commented that during the work session, “We talked about the parking report and need for wayfinding signs. I suggest we find a way to intercept visitors before they get to the core of the town.” Hidahl requested that staff look into cost and design of a wayfinding system.

Mayor Fey commented, “I would like to thank Eric Miller and how much better the town is looking.” He added that there are several units that have become a storage area and owners should probably consider how they want their properties to appear since toilet seats and other miscellaneous items are visible from the street.

Mayor Fey opened the floor to the public for anyone who wished to speak to the council on any items not on the agenda. Sheriff Kevin Armstrong asked to address the Council.

The Sheriff reported the County is in Stage 1 Fire Restrictions due to having very little moisture in the last few weeks. The recent rains, reports Armstrong, are not adequate to lift the restriction, but they will change the restriction when the situation warrants. The Sheriff also commented on the recent fire near Lump Gulch saying that the coordination between Timberline Fire, Central City Fire Department, the Gilpin County Sheriff’s Department, the U.S. Forest Service, and the Nederland Fire Department was excellent and efficient. The fire is completely out and currently under investigation. The fire was human caused since there have been no lightning strikes in the area or other natural phenomena. There are no signs of a campfire. Fire Chief Gary Allen piped in, “It could be kids,” which Sheriff Armstrong agreed that it was a possibility.

City Council moved to enter Executive Session at 8:21 p.m. The next regular Council Meeting will be Tuesday, September 17, 2019.

END_OF_DOCUMENT_TOKEN_TO_BE_REPLACED

Benefitting the county, schools, and much more By Don Ireland   This year marks the 30th anniversary of casinos opening in the former little mining towns of Black Hawk, Central City and Cripple Creek, Colorado. In those early years, smoking was allowed inside ... END_OF_DOCUMENT_TOKEN_TO_BE_REPLACED