Central City to exchange some properties with Black Hawk 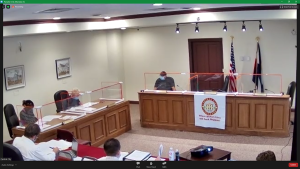 Council met with Staff prior to the regular meeting for a Work Session to have a discussion with casino operators regarding limited gaming, betting limits, and new games; also, to hear a plan for economic resiliency for Main Street.

Mayor Fey led the Pledge of Allegiance and then asked for any amendments or additions to the meeting agenda. There was no response.

Mayor Fey asked if there were any conflicts of interest on any agenda items. Both Mayor Fey and Alderman Hidahl declared they had a conflict of interest with item number 12 which was the public hearing for a demolition of a historic shed. Both Fey and Hidahl recused themselves for that item.

Austin Boulter applied for the Promise Program. He will be a junior at the University of Colorado Boulder and has maintained a cumulative GPA of 3.202. Austin addressed the Council via Zoom and talked about his experiences; “the best experience in the world.”

Alderwoman Larrata moved to approve the Promise Program request of $5,000 and Alderwoman Johnson commented she wants to award him with an additional $1,000. She stated kids are dropping out of school because they are stressed out and overwhelmed. While a $1,000 is a drop in the bucket, every bit helps. Mayor Fey consulted staff regarding the budget for the Promise Program and what they anticipate. Director Robbins commented that they typically exhaust the entire budget every year and the program states that the applicant cannot receive more than $5,000 per calendar year. The 2020 Budget is for $20,000 which covers four applicants. Mayor Fey is in favor of revamping the program and increasing the maximum. Manager Miera commented they can reach out to the two expected applicants to determine if they expect to apply this year. Alderwoman Johnson ultimately seconded the motion for $5,000. The motion passed unanimously.

Director Beard introduced Resolution 20-11 which would authorize the acquisition of a pickup truck for the City Water Department.

After some discussion on the ethics of spending money for new assets, Alderwoman Laratta moved to approve Resolution 20-11 and was seconded by Alderwoman Johnson. The Resolution passed unanimously.

Attorney McAskin introduced the first reading of Ordinance 20-09 which would authorize the exchange of certain properties with the City of Black Hawk.

Alderwoman Laratta moved to approve the first reading of Ordinance 20-09 and set the second reading and public forum for July 21, 2020; and was seconded by Alderwoman Johnson. The motion passed unanimously.

Attorney McAskin introduced the first reading of Ordinance 20-10 which would amend sections of the Municipal Code and the Land Development Code. This Ordinance essentially affecting any new zoning for commercial or rezoning into commercial requires the owners to petition for inclusion into the Business Improvement District.

Alderwoman Laratta moved to approve the first reading of Ordinance 20-10 and set the second reading and public forum for July 21, 2020; and was seconded by Alderwoman Johnson.

Mayor Fey had received and responded to an email from the applicants for a shed destruction on East 6th Street and had met with the applicant and he recused himself. Alderman Hidahl stated he had a similar issue and recused himself as well. Judy Laratta assumed her Mayor pro-Tempore role for the public hearing.

The applicants, Kari and Christopher Boling gave a PowerPoint presentation showing historical pictures of the shed. The original shed during the historic period included a larger structure which was later demolished or destroyed by other means in the early 1900s leaving about one-third of the original structure. Later in the century, an addition was built which did not match the original historic structure. The Bolings also argued that the prior owners of the property allowed the shed to go into disrepair and it is beyond restoration.

Alderwoman Laratta called for a five-minute recess to bring the recused council members back into chambers.

Alderwoman Johnson apologized to the shed-demolition applicants for needing to come back to another hearing.

Alderwoman Laratta commented they had a visitor from California, the sister of John Moriarty, and she said how terrible the opera houses look. “How terrible and disgusting the houses look!” stated Laratta and the visitor could not believe their condition. Laratta stated, “It made me sick and sad in my heart,” to hear that, “I think the opera needs to step up.”

Alderman Aiken said he is hearing comments from working in the casino industry about what a good job the casinos are doing cleaning the machines and making sure people stay socially distant.

Mayor Fey commented, “I like having Council back in Council chambers.” He also said that the folks involved in Gilpin History have been out in force in Victorian costumes and “they really add to the flavor” of our town.

Randall Rongved, citizen of Central City, spoke to Council regarding activities available for youth in the city. Rongved has lived in Central City for many years, and “The activities got boring after a few years. Many of my friends have picked up skating, but we are not allowed on the sidewalks and garages, we really have no other place to skate other than the skate park,” which they cannot get to very often. Idaho Springs has a skate park which is not being used; the equipment is disassembled. Randall offered a temporary solution, “Perhaps we can borrow some of their equipment” for a cost-effective way to bring a skate park to Central City. Mayor Fey commented that the Tony Hawk foundation has grants for this kind of thing, but they are looking for something more immediate. “We are now aware of your desires,” said Fey, “and will include it in our discussion.”

END_OF_DOCUMENT_TOKEN_TO_BE_REPLACED

Benefitting the county, schools, and much more By Don Ireland   This year marks the 30th anniversary of casinos opening in the former little mining towns of Black Hawk, Central City and Cripple Creek, Colorado. In those early years, smoking was allowed inside ... END_OF_DOCUMENT_TOKEN_TO_BE_REPLACED