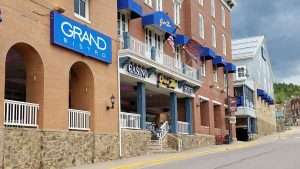 Council met for a Work Session at 1:00 pm just prior to their regular meeting to talk about the Central City Opera’s summer plans, gaming legislation, and firework displays in conjunction with fire bans.

Council was together in the same room for the first time since the Stay at Home order in March, protected by plexiglass shielding and separated by 6 feet or more around the room. They got off to a rocky start as feedback from the audio made it impossible to hear or understand. The system was tested prior to meeting with fewer people in the room and the additional people with live mics created problems.

The Central City Opera’s summer programming has been postponed to 2021; however, they are making plans to sing from the garden area between the Opera House and the Teller House and have requested permission to close Eureka for performances.

Council discussed creating a letter of support on City letterhead for Initiative 257 which would give each gaming municipality the ability to independently vote on measures to increase betting limits and add new games for their home cities. Initiative 257 would be included on the November ballot for Colorado. The Council was divided on the issue and Mayor Fey asked for the item to be added to the regular meeting for an official vote.

Alderman Hidahl voiced his desire to move the shooting location of the annual Black Hawk fireworks show or to end it entirely. He argued that the City of Black Hawk does not seem to take responsibility for the fire danger, the resources to prevent fire and the impact they have on the streets, or the aftermath of cleanup. People who live on The Casey (Casey Street) clean up many bags of used shells and debris from the fireworks each year. Additionally, when there are no fire bans, people can have fire pits in their yards, and he “doesn’t trust” anyone to have a proper fire pit or to be responsible for one. Ultimately, he wondered if the City should have its own ordinance regarding fire bans and the use of fire pits. Alderwoman Laratta argued that the fireworks show is one of the best in the State attracting thousands of people. Alderwoman Johnson stated she would be in favor of forming a volunteer community group to clean up after the fireworks show.

Mayor Fey led the Pledge of Allegiance and then asked for any amendments or additions to the meeting agenda. An item regarding gaming legislation support was added to the agenda.

Council considered approval of the consent agenda consisting of the meeting minutes from the meeting on May 18 and 19, and the regular bill lists through May 12. Alderwoman Laratta asked about an expense of $14,641 to the O.J. Watson Company for “equipment for PW truck.” Manager Miera responded that was for a sand box and bed for one of the public works vehicles. Alderwoman Laratta moved to approve the consent agenda and was seconded by Alderman Aiken. The motion passed unanimously.

The Council considered approval on one support letter, one Promise Program Request, and two Resolutions.

Backers of Initiative 257 have asked for letters of support from each gaming municipality and Council debated whether to comply with their request. Initiative 257, as previously stated, would give each city the ability to change betting limits and add new games such as baccarat if voters approve. Mayor Fey stated that since this letter represents the City of Central, he would not be in favor unless the council was unanimous. After a call to vote, Alderwoman Laratta and Mayor Fey voted against. Since the measure passed, a letter of support will be drafted.

Rachel Schmalz applied for the Promise Program grant which pays $5,000 to eligible students for continuing education. This is the fourth year Rachel has applied. The City has set aside $20,000 in 2020 to fund the Program and applicants can request a maximum of $20,000 over four years. Ms. Schmalz has been attending Hastings College in Nebraska maintaining a GPA of 3.74 working toward a degree in History and Political Science. Rachel hopes to be teaching English in a foreign country in the following year and then work in foreign politics.

Rachel had joined the council meeting via phone and thanked Council for their continued support of her education.

Alderwoman Laratta, stating this is the most complete application she has ever seen for the Promise Program, moved to approve the grant and was seconded by Alderman Aiken. The motion passed unanimously.

Manager Miera re-introduced Resolution 20-19 which would establish incentive programs for gaming establishments by waiving or reducing certain annual and monthly fees. This item was discussed at the prior meeting and continued to today. The Resolution would waive monthly payments of the annual license fee and the monthly device fees and the monthly billboard fees for the unpaid portion of March and the entirety of April and May. In return, the casinos would remain in good standing with the City, and they resolve to establish the same or higher levels of employment and devices after a one-year period.

Alderwoman Laratta moved to approve Resolution 20-19 and was seconded by Alderman Aiken. Alderman Hidahl commented that he didn’t like that there was no provision for enforcement or consequence for non-compliance, but would vote in favor. The Resolution passed unanimously.

Manager Miera introduced Resolution 20-20 which would extend the local Emergency Disaster Declaration through June 17, 2020. Continuing the declaration enables the City to utilize resources available during a disaster.

Mayor Fey asked not to extend the declaration unless there is a deficit of resources that it would provide.

Alderwoman Laratta commented she believes “we are still in a disaster” and is in favor of extending the declaration.

Alderwoman Laratta moved to approve Resolution 20-20 and was seconded by Alderman Aiken. The Resolution passed unanimously.

Manager Meira gave a report on phased reopening for the City coinciding with CDC and Department of Health regulations. As the State lifts restrictions, so would the City. All restrictions would not be lifted until and unless a vaccine has been developed, tested, and the City receives FDA emergency use authorization for the vaccine. The plan can change as information changes.

Beginning June 1, Central City staff transitioned to a four-day business week of Monday through Thursday with offices closed on Fridays. This schedule would not be applied to emergency services, the Visitors Center, or to public works and utilities. Starting June 8, City Hall will be open to limited public access (by reservation only) every Tuesday and Wednesday from 8:00 am to noon. City Council meetings will continue to be held virtually. The full plan will be published on the City’s website.

Alderwoman Johnson spoke as a proponent of a four-day work week and remote working as cost saving measures for the government encouraging staff to explore those options for the City.

Mayor Fey encouraged a return to meetings at 6 pm starting with the next meeting. Alderwoman Laratta argued that they should keep meetings in the afternoons as long as there are Safe-at-Home orders in place, but to return to an evening format once they can let people into Council Chambers.

Alderman Laratta commented she is “really happy” how the plants and flowers on Main Street make it “look wonderful!” She is also happy about the new bollards installed at the end of the street.

END_OF_DOCUMENT_TOKEN_TO_BE_REPLACED

Benefitting the county, schools, and much more By Don Ireland   This year marks the 30th anniversary of casinos opening in the former little mining towns of Black Hawk, Central City and Cripple Creek, Colorado. In those early years, smoking was allowed inside ... END_OF_DOCUMENT_TOKEN_TO_BE_REPLACED

Benefitting the county, schools, and much more By Don Ireland   This year marks the 30th anniversary of casinos opening in the former little mining towns of Black Hawk, Central City and Cripple Creek, Colorado. In those early years, smoking was allowed inside ... END_OF_DOCUMENT_TOKEN_TO_BE_REPLACED