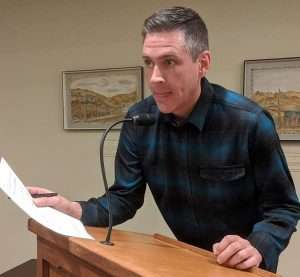 Council met with Staff on Tuesday, February 18, for a work session prior to the regular meeting. The topic of discussion was Ordinance 20-02 which was scheduled for a first reading during the regular council meeting later the same evening. Ordinance 20-02 would adopt vacant property registration for commercial and residential properties,require minimum maintenance, rehabilitation, and establish fees and penalties for not adhering to the ordinance. The intent of the ordinance is to “encourage the reuse of vacant properties and reduce harms and costs such properties pose to their communities.” This ordinance, if passed, would use a three-phase implementation: Phase 1 instigating communication about the ordinance and establish the registration process followed by inspections for safety standards of the properties by the Fire Chief and directives for minimum maintenance required to meet those safety measures; Phase 2 will establish a rehabilitation grant funded from fines and penalties, introduce escalating registration fees for vacant properties, and assess fines; Phase 3 will begin submission of rehabilitation plans for properties to “get the property back into use” to be provided by the property owner with a clear timeline for action to be taken. There are three exemptions to registration of vacant properties available: if the property is under active construction with valid permits, if the owner has been actively seeking to rent or sell the property and has had it listed with a licensed real estate agent, and if the property has suffered from fire or extreme weather damage in the past three months. Vacancy will be determined by utility usage and evidence of neglect including, but not limited to, overgrown or dead vegetation, accumulation of flyers, newspapers, trash, abandoned vehicles, auto parts, appliances, and furniture. Code Enforcement Officer Lindsey Flewelling identified 49 nine properties potentially vacant including 21 owned by the Central City Opera. The registered vacant list would be public information and include the names and contact information of the owners.

Alderman Hidahl stated that from prior work session talks, he expected an Ordinance that would be an economic development tool, aimed at maintaining properties.

Mayor Fey commented that the penalty structure of this Ordinance will not be an incentive for commercial property owners other than to establish resentment. His expectation for an ordinance would be to maintain a standard of maintenance and to ensure public safety. Regarding commercial properties, he would like to see more discussion with property owners about what they need to fill their spaces before imposing any fines. “Lips before teeth,” said Fey and, “kisses first, then bites.”

Alderwoman Laratta said she liked the idea of keeping a list of contacts for vacant properties, especially in the case of an emergency such was a water break.

Alderman Aiken stated he would like the Ordinance to be more about hazard prevention. Vacant properties can lead to undesired usage such as squatters and vandalism that can become a safety concern for surrounding residents.

Mayor Fey opened commentary from the public and resident Eric Chinn chose to address council. Chinn commented that the commercial properties have been in flux since before gaming and recommended a grant program for reconstructions to make them beneficial and usable now. He stated the City should have an agent to negotiate with the owners to make something happen, “Educate and encourage” rather than penalize.

Based on the comments from Council, Staff decided to remove the Ordinance from that evening’s agenda and come back with something directed more toward economic development and maintenance.

Mayor Fey led the Pledge of Allegiance and then asked for any amendments or additions to the evening’s agenda. Alderman Hidahl moved that item number eight, Ordinance 20-02, be removed from the agenda and was seconded by Alderwoman Laratta. The motion passed unanimously.

The Mayor called for a motion to approve the consent agenda which consisted of the minutes from the February 4 and 11 meeting and regular bill lists through February 3. The meeting on February 11 was for the purpose of Executive Session regarding legal interpretation of the 1999 IGA for growth. No decisions were made during Executive Session. Mayor Fey asked about an expenditure to Robison Advertising Design for event marketing of $1,775. Manager Miera replied that was for an order for rack cards and similar advertising materials on the 2020 events for the City. Alderwoman Laratta questioned an expense of $4,900 to Denver Carpet and Flooring for carpet. Miera responded that was for the purchase of carpet for installation at the Visitors Center. The company installing the carpet is requiring the advance purchase of materials and will invoice the City for labor after completion. The project is in the budget for 2020. The carpet chosen is more durable than cheaper products and still within the budgeted cost. Alderwoman Laratta moved to approve the Consent Agenda and was seconded by Alderman Aiken. The motion passed unanimously.

The old business is the second reading and public forum for Ordinance 20-01.

Mayor Fey opened the public forum for Ordinance 20-01, but no one chose to address council.

Alderman Aiken moved to approve Ordinance 20-01 and was seconded by Alderwoman Laratta. The Ordinance passed unanimously.

Council considered two appointments for new business; one item had been stricken from the agenda.

Steering in the Right Direction

Council next considered two nominations for the Trails Master Plan Steering Committee. The steering committee will consist of various representations including the City of Central, City of Black Hawk, Gold Mountain Village, Prospector’s Run, and Gilpin County. Mayor Fey volunteered as did Alderwoman Johnson. There were no objections to the appointments.

A new website for the City will be launched this week.

Regarding the addition of a temporary loading zone on Main Street in front of Mayor Willie’s Doughnuts, Chief Ihme, Chief Allen, and Director Hoover inspected the area and determined it is not in the best interest of public safety to have parked vehicles in that spot. Unless people parked “perfectly,” the vehicle would impede emergency response.

Mayor Fey reported he received an email from a resident about restrictions of trucks on Spruce Street and fear they were not receiving packages because of the restriction. The restrictions for trucks are 23 feet in length. Alderman Hidahl stated, “Either those drivers don’t know the length of their vehicles or our ordinance is wrong.” Manager Miera said Staff can contact those delivery companies and let them know the limitations and that the trucks coming up here are within regulation.

Alderman Hidahl commended the public works department during the snowstorms. “I measured over 30 inches of snow and it’s just amazing the job they have done. I’ve been impressed with the performance after the storm; widening and clearing areas. It was a huge challenge and your guys met it well.”

Council entered Executive Session at 7:47 pm regarding potential acquisition of real property by the City. The next regular Council Meeting will be Tuesday, March 3, 2020.

END_OF_DOCUMENT_TOKEN_TO_BE_REPLACED

Benefitting the county, schools, and much more By Don Ireland   This year marks the 30th anniversary of casinos opening in the former little mining towns of Black Hawk, Central City and Cripple Creek, Colorado. In those early years, smoking was allowed inside ... END_OF_DOCUMENT_TOKEN_TO_BE_REPLACED