The Central City Council met with Staff on March 6, 2018, for a work session prior to the regular council meeting. The topics of conversation were parking spaces at Annie’s Emporium and a steam shovel presentation.

The reversal of traffic flow on Main Street reconfigured the parking reserved for Annie’s Emporium into a pedestrian area. Owner Don Boring addressed the Council regarding his concerns. When Annie’s was first purchased 24 years ago, there were five parking spaces right in front of it. In 2011, the City repaved Main Street with designer paving stones removing three spots. With the change in direction, the two remaining spots are moved further away and less convenient. Since that time, sales volume has “dropped substantially.” Today, many people park across Spring Street next to the Sauer McShane building. When people park there, they must back out in traffic that flows 25 miles-per-hour or more. Boring proposes recreating the parking spots in front of Annie’s and people could be backing out in traffic about 5 miles-per-hour which he maintains is a safer arrangement. “We need our parking back to keep our store healthy,” said Boring.

Manager Miera stated that the decision to remove those two spaces was based on a recommendation from JVA Consultants when they were looking at changing directionality of Main Street traffic flow. The Council had a consensus that Staff should look at recreating those parking spots and reporting what any legal concerns might be. The parking spot issue will return at the next work session.

Dan Martin and Kayla Evans, Vice President and President of Nederland Historical Society, addressed the Council regarding their historic steam shovel. The Nederland museum has a working steam shovel that was originally found in north Gilpin County and has a history of being used building the Panama Canal; also it has been featured on the History Channel. The Historical Society is in the process of restoring the Steam Shovel, but has run out of funding and resources to continue. They are now offering the steam shovel to Central City and the Gilpin Historical Society. The shovel could be landmarked as a national monument due to its participation in the Panama Canal. There are only three remaining in the world; one in Costa Rica that does not run, one in Montana that is in pieces, and this one, which still works. The Historical Society has the funds to cover most of the $15K cost to safely move the machine to Central City. The Council responded exuberantly and directed Staff to investigate the costs and locations to acquire the steam shovel. The title to the machine will ultimately go to the Gilpin Historical Society.

The Mayor called for a motion to approve the consent agenda which consisted of the minutes from the February 20 meeting and regular bill lists through February 27. Alderwoman Voorhies moved to approve the Consent Agenda and was seconded by Alderman Aiken. The motion passed unanimously.

Mayor Heider opened the floor to the public for anyone who wished to speak to a topic on the agenda. No one chose to speak to the Council.

Mayor Heider opened the public forum for this Ordinance and Jeremy Fey chose to address the council. Jeremy is the one who originally solicited Denver Adventures and assured the Council that they are “stand-up” people and he does not know why anyone would not take advantage of this offer. He urged Council to vote yes on whatever the contract will end up being.

Alderwoman Voorhies moved to continue the public hearing in consideration of Ordinance 18-02 to March 20, 2018, and was seconded by Alderwoman Bell and Laratta simultaneously. The motion passed unanimously.

The Staff Reports were included in a packet given to the Council ahead of the meeting. No one chose to speak or ask questions about the reports.

Alderwoman Voorhies received a letter from Mickey Rosenbaum, General Manager of the Century Casino, regarding snow removal concerns. Manager Miera replied that he received the same letter and Staff has been able to respond to Mickey. Public works is discussing some of the issues Rosenbaum had with snow and ice removal and how to address them. New procedures will be brought to Council on a future work session.

Mayor Heider opened the floor to the public for anyone who wished to speak to the council on any items not on the agenda. No one chose to address the Council.

The Council moved to enter Executive Session at 7:15 pm to discuss legal questions regarding proposed changes to “Growth IGA” dated September 29, 1999, and regarding taxation of free play and to discuss the potential sale of City property. The next regular Council Meeting will be Tuesday, March 20, 2018. 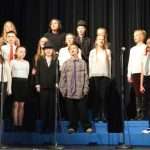 Cultural music festival a treat for listeners
Leave a comment