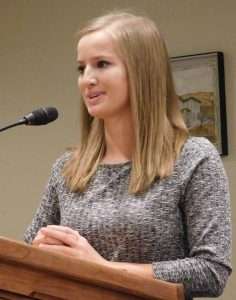 The Central City Council met with Staff on July 18, 2017 at 6:30 pm for a work session prior to the regular council meeting. The reason for the Work Session was to review the Land Development Code and Design Guidelines that was postponed at the last Council Meeting. Director Ray Rears and Todd Messenger hosted the work session. One of the changes to the document removed townhomes from the historical district as they are not historical to the area; additionally prohibiting hostels from the historic district as well as parking areas for hostels. Prospector’s Run townhomes are outside of the historic district. The Council made several suggestions during the Work Session that led to changes in the master document which was subsequently reprinted for Council’s decision during the regular meeting that followed.

The Mayor called for a motion to approve the consent agenda which consisted of the minutes from the June 29 meeting and regular bill lists through July 11. Alderwoman Bell moved to approve the Consent Agenda and was seconded by Alderman Aiken. The motion passed unanimously.

Mayor Heider opened the floor to the public for anyone who wished to speak to a topic on that night’s agenda. One person chose to address Council.

David Josselyn, reporter for the Weekly Register-Call, requested clarification on two items in the check register just approved in the Consent Agenda. The first was to point out a typo in the description for check number 133039 which reads “Tireds for Fleet.” The second was to question check number 133054 made to Office Stuff Inc in the amount of $417.91 for a “10-key.” Manager Miera clarified that due to software limitations, only the first item on a purchase order prints in the description and that there were more items purchased with that check than one 10-key.

Alderwoman Voorhies moved to approve the second reading of Ordinance 17-06 and was seconded by Alderman Aiken. Alderwoman Laratta commented “I think this is fabulous, and I also think it’s about time.” The Ordinance passed unanimously.

The City of Central maintains funds for the Central City Promise Program which awards high achieving students with money to use specifically toward college education. High School graduate Rachel Schmalz applied for the award requesting $5,000 for her continuing Education. Rachel maintained a 4.0 grade point average and will be attending Hastings College in Nebraska this fall to major in Psychology. Rachel states her goal is “To become a prosecutor. As a prosecutor, I aim to be able to use my public speaking skills, my leadership, and my drive to put the bad guys in jail.” Mayor Heider commented that in the years she has been on the Council, Rachel is the first applicant “brave enough to face the Council” and speak at their meeting.

Alderwoman Voorhies moved to award the Promise Program scholarship in the amount of $5,000 to Rachel Schmalz and was seconded by Alderwoman Bell. Mayor Heider stated that Schmalz has now set a precedent and will look forward to her applying the following year and seeing her in person. The motion passed unanimously.

Director Rears introduced Resolution 17-19 which would approve the Central City Design Guidelines per Ordinance 17-06 which was passed earlier this evening. This Resolution is a housekeeping issue necessary to enact the Design Guidelines now approved to be updated in the City Municipal Code.

Manager Miera recognized Director Ray Rears for all his countless hours he put in to getting the four guidelines; the Comprehensive Plan, the Zoning Code, the Disaster and Recovery Plan, and the Land Development Code updated for the City.

Alderwoman Bell requested Staff to add to a work session Exit 7 options on the Central City Parkway and the Business Support Program.

Mayor Heider thanked Fire Chief Gary Allen and the volunteer firefighters for their quick work putting out a fire on the Fourth of July during the fireworks show.

Alderwoman Voorhies commented that there is going to be a public meeting on July 26 at 5 pm in Idaho Springs at the United Center with the I-70 Coalition and CDOT regarding the Floyd Hill project starting in 2018. The project will directly impact traffic flow into both Central City and Black Hawk due to highway closures.

Patty O’Rourke-Perkovich, resident of Prospector’s Run, first addressed the Council. Patty first responded to comments made by Larry Bartlett at a meeting in June regarding Alderwoman Bell. She found what he said offensive and deemed his comments as coming from a bully that the Council should do what Mary Bell wants or there will be consequences. Since then, O’Rourke-Perkovich had a productive conversation with Larry Bartlett and said he was surprised he came across that way. They both agreed that there has been a lot of growth on Main Street and that Mary Bell has a lot of ideas and energy she has brought to the Council. They found their goals are the same; the success of Central City. When Patty went to City Hall to pay her recent water bill, she spoke with City Clerk Bechtel about her feelings and learned that there are limits to cash and resources which can be frustrating for Council members; additionally, there are specific procedures government must follow that makes changes take longer which is also frustrating for Council members. Patty finished by saying we have hard-working and dedicated Council Members that she is sure can work together to make Central City viable.

Sharon Cate, Casey Street resident, next addressed the Council. Cate thanked the Sheriff’s department and the fire department for their work making Casey Street safe on the Fourth of July. “It was not night of the living dead this year,” said Cate. Sharon added that she would like to contribute to ideas for making the Casey even safer next year.

Mayor Heider adjourned the regular meeting at 7:29 pm. The next regular Council Meeting will be Tuesday, August 1, 2017.

END_OF_DOCUMENT_TOKEN_TO_BE_REPLACED

Where the dead get to tell their story By Jaclyn Schrock On Saturday, August 21, the Gilpin Historical Society held their annual Cemetery Crawl. Tickets allowed the shuttle of hundreds of guests from the Teller House parking lot to the Cemetery. Depending on v... END_OF_DOCUMENT_TOKEN_TO_BE_REPLACED

Benefitting the county, schools, and much more By Don Ireland   This year marks the 30th anniversary of casinos opening in the former little mining towns of Black Hawk, Central City and Cripple Creek, Colorado. In those early years, smoking was allowed inside ... END_OF_DOCUMENT_TOKEN_TO_BE_REPLACED