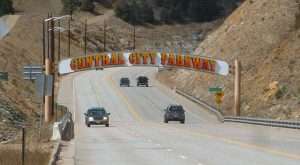 The Central City Council and staff met for a special council meeting on Tuesday, March 18, 2015. All members of Council were present along with City Clerk Reba Bechtel, City Manager Daniel Miera, and Police Chief Terry Krelle. The meeting was called to order at 6:00 p.m. Manager Miera submitted an amendment to the agenda stating that the title and some of the ‘whereas’s’ of Resolution 15-08 need to be changed. Miera gave the Council the option of changing them now or when they are reviewing the item. The Council opted to amend the Resolution during review.

The Council opened the floor to the public for addressing any issue on the evening’s agenda. No one from the public opted to speak to the council.

City Manager Miera introduced Resolution 15-08 which would select a design alternative for the updated Central City Parkway archway sign and authorize the City Manager to execute an Intergovernmental Agreement with the Central City Business Improvement District (BID) to facilitate the installation of the updated archway sign. Manager Miera turned over the floor to the General Manager of the Reserve Casino Hotel, Shannon Keel.

Ms. Keel handed out design pages for the Central City Parkway archway sign located just off I-70 at Hiden Valley Exit 243. The designs included a new idea based on what was presented at a work session with the Business Improvement District and collaboration with City officials after the meeting. The presented concept would have the words ‘Casino Parkway’ in bright yellow on a black background. In between ‘casino’ and ‘parkway’ would be the words ‘Historic Central City’ in red. Ms. Keel said “If we have consensus upon the design tonight, we have options to make it happen.” Shannon Keel is the driver behind the sign change and has support from the BID. The submitted design is not set in stone, but it is the concept and changes such as color scheme, font, and additional emblems or logos could be added before it is installed. The City of Central is not being asked to fund the project as Shannon said, “I am not here to ask for monetary of financial support, I am just asking for your support and the Reserve will figure out financing.”

Ms. Keel outlined some of the positives for changing the sign. The current sign is a little hard to read as you are zooming by and these changes will make it more visible from the interstate. The colors of yellow and white pop the most off of a black background. The word “historic” makes Central City unique from Black Hawk and other areas. Regarding Central’s emblem that is not included in the new design, Shannon said, “I personally like the emblem, but you can’t necessarily read ‘Central City’ in the emblem.”

Manager Miera advised the council, “Before we can move forward, we need to decide if the message and change to the sign would be beneficial.” Ms. Keel said, “I want to see something happen; if there was someone with a better proposal, I’m the first one to say let’s turn mine over and go with theirs.” Shannon fears that this will become yet another plan that is talked about ad nauseam and nothing happens.

Alderman Gloria Gaines questioned the language of the Resolution saying it reads that the City is selecting a design alternative. “I was anticipating that this would be worded more to approve the design concept, not the design.” Gaines also want it to be pending an engineering report of feasibility and if it is not feasible, to rework and reapprove a new design.

Alderman Heider suggested adding the word ‘a’ before ‘design concept’ so they are not limited to a single design.

Manager Miera noted the changes on the language of the Resolution. Alderman Gaines moved to adopt Resolution 15-08 and was seconded by Alderman Judy Laratta.

Alderman Kathy Heider opened up discussion before votes were cast. Alderman Heider said “it makes me sad because I think calling it a casino parkway enforces a road to Black Hawk.” Heider also commented that the words “Historic Central City” do not stand out. “Personally, I really hate it being called the casino parkway,” finished Heider.

Alderman Gaines, who worked with the BID and the Reserve on design, rebutted that “one of the things we collaborated on was adding the word ‘Historic’ to Central City to start a process.” Gaines explained that this would be the beginning of creating a unique thought process when people consider coming up to gamble. Other signage on the Parkway and in the City would duplicate and emphasize the “Historic Central City” theme and attaching that to casinos would help shift the idea of casinos equaling Black Hawk to casinos equaling Central City and Black Hawk. Gaines also emphasized that the sign is not permanent and can be changed. “The word ‘casino’ is really a compromise,” said Gaines.

Mayor Engels stated he understood Heider’s reticence using the word ‘casino’ and agreed to a point that the sign would lead people to casinos in Black Hawk. “But the casinos are a part of this City and this drives people to casinos.” Other things such as the Central City Opera and the museums can be displayed in conjunction with the sign. “I think this is the first step toward the entire branding effort,” finished Engels.

Alderman Laratta stated, “I agree with Ron completely. If we are worried about the Parkway sign leading people to the casinos in Black Hawk, that’s our problem.” Laratta emphasized that it is the City’s problem to keep people in Central City once they get here saying, “let’s make changes to get people to stop here instead of heading down the hill and get rid of the dreaded ‘do not enter’ sign.”

Alderman Voorhies spoke up saying, “I agree with Kathy. What I do like is that this could be temporary and can be changed, but I don’t like it saying ‘casino.’”

GM Keel responded, “And the only reason for that (saying ‘casino’) is to get people off the highway.”

Alderman Laratta added, “I think it’s really impactful to see the word casino.” Laratta expounded that she and her husband used to travel and when Judy saw the word ‘casino,’ she would ask to turn off the highway there.

Mayor Engels wrapped things up saying that when he originally saw the concept with the sign saying ‘casino,’ he agreed with Alderman Voorhies and Alderman Laratta. “But now I’ve had more time to think about it and let it set in.” Engels pointed out that there is about thirty seconds of visibility of the sign as you drive by “and thirty seconds is pretty significant.” The Mayor then called for a vote.

Alderman Heider was a single voice voting against the Resolution. The Resolution passed three to one.

Manager Miera informed the council that CEDA has officially disbanded as of February 4, 2015, per their agreement with the City.

Manager Miera apprized the Council of closure dates of the Parkway for the Pit Rally this year. The Parkway will be closed on July 17 from 8:00 a.m. to noon and then on July 18 from 8:00 a.m. to 5:00 p.m. The City has received approval for the closure from the Central City Opera and the BID.

Manager Miera briefed the Council on the Knights of Pythias building status. There will be an engineering report on March 20 and then an order of work to commence by April 3. The owner is able to appeal the order to repair, but as of today, March 18, the City does not have an appeal. They have until April 10 to file an appeal.

Manager Miera finished his report saying, “at 4:04 p.m. today, the Denver Court issued an order of dismissal for the lawsuit case.” This is in reference to a lawsuit by Gilpin County and the City of Black Hawk against the State of Colorado which names Central City and Teller County as defendants regarding the calculation of gaming taxes. Gilpin County and Black Hawk have about 28 days to appeal the decision.

Alderman Gaines thanked the Staff for putting together the work session with the Gilpin Commissioners. “We heard a couple of comments last night about how encouraging it was that we did that and plan to do it again,” added Gaines.

Manager Miera asked if the format they are using, substituting alternate regular council meetings for extended work sessions, working for the Council. Alderman Gaines commented that as long as they don’t have anything important to decide on, she is in favor of continuing.

In April, the normal council meeting would be on the 7th, but Mayor Engels and Alderman Heider will be gone that day. Alderman Gaines asked, “Who is running that meeting?”

Manager Miera responded, “right now, we have to decide whether we’re going to have the meeting.”

Manager Miera answered, “That’s part of what we need to decide.”

The Mayor opened the floor for public comment on any items from tonight’s meeting.

Ren Goltra addressed the Council. Goltra said he would like to know when from the time the Parkway sign first becomes visible from the interstate I-70 to the time a decision must be made to exit – how long is that? Goltra also suggested using radio frequencies similar to what is used for highway conditions as a marketing tool. “We could have a streaming radio service with information about the town and events.” Goltra then congratulated the City for their cooperation with the County on taking ownership of the Belvidere.

Citizen David Josselyn next addressed the council giving his opinion that when he looks at the latest design for the sign, he reads it as “Historic Central City Casino Parkway.” Josselyn added that for him, this makes the Parkway a pathway to Central City first, and a casino parkway secondary.

Mark your calendars for Tuesday, April 7, 2015, for the next anticipated regular council meeting.

END_OF_DOCUMENT_TOKEN_TO_BE_REPLACED

Where the dead get to tell their story By Jaclyn Schrock On Saturday, August 21, the Gilpin Historical Society held their annual Cemetery Crawl. Tickets allowed the shuttle of hundreds of guests from the Teller House parking lot to the Cemetery. Depending on v... END_OF_DOCUMENT_TOKEN_TO_BE_REPLACED