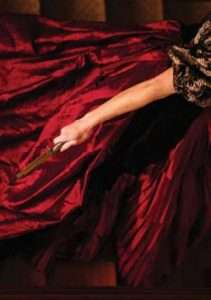 On July 16, 1932, Central City Opera Summer Festival, as it is known today, was launched with a performance of Alexandre Dumas’ Camille, starring Lillian Gish. The week-long run completely sold out. On July 16, 2016, 84 years later, Central City Opera continues its 2016 summer festival with the opening of a new production of Tosca, Puccini’s powerful thriller of passion, seduction, and deceit, running in repertory in the Central City Opera House through August 7.
“Similar to The Ballad Baby Doe, our new production of Tosca provides an opportunity for Central City Opera to use scene projections to create a sense of time and place,” said Pelham (Pat) Pearce, general and artistic director of Central City Opera. “We are excited to add this new approach to our technical and artistic ‘toolbox.’”
Set in 1800 Rome against the backdrop of the Napoleonic Wars, Tosca centers on the jealous and conflicted diva, Floria Tosca, who struggles to free her lover Mario Cavaradossi, a painter, from the clutches of the cruel and wicked police chief Baron Scarpia. Tosca, last produced by Central City Opera in 1998, is sung in Italian with English supertitles.
“I’m excited about working with two of our former young artists—Alexandra Loutsion and Michael Mayes—both of whom are creating their roles, Tosca and Scarpia, respectively, for the first time,” said John Baril, music director for Central City Opera and conductor for Tosca. “It’s a testament to the continued success of the Bonfils-Stanton young artist program that it allows us to invite back former apprentices in leading roles. Having worked with them musically, I can say with confidence that they are ready for these roles and both will sound gorgeous in our jewel box theater.”
The principal cast for Tosca includes Alexandra Loutsion (soprano), making both her Central City Opera debut and role debut as Tosca, and Jonathan Burton (tenor) as Mario Cavaradossi, who sang the role of Don Jose in Central City Opera’s 2011 production of Carmen. Michael Mayes (baritone), known for his performance of Joseph DeRocher in Central City Opera’s Dead Man Walking (2014), takes on his first Scarpia, and Donald Hartmann (bass-baritone), new to the Central City Opera stage and also singing the role of William Jennings Bryan in this summer’s The Ballad of Baby Doe, sings the role of the Sacristan.
Tosca is directed by Joachim Schamberger, new to Central City Opera this summer, who is also the set and projection designer. David Martin Jacques is the lighting designer. John Baril, music director for Central City Opera and celebrating his 25th season with the company, conducts.
“Puccini’s works are the culmination of Italian opera,” said Baril. “Tosca was premiered between La bohème and Madama Butterfly and remains an audience favorite due to its plentiful tunes and three-dimensional characters. It’s also perhaps the most difficult of the Puccini canon to conduct. Every moment counts for something; there’s not a wasted note in the piece. It’s extremely condensed drama, almost TV-like in its intensity.”
The Central City Opera 2016 Summer Festival continues with two one-act operas: Mozart’s The Impresario performed in Central City on July 27 and August 3 at noon, at the Williams Stables Theater, and in Boulder on July 28, at The Nomad Playhouse, at 6 p.m. and 8 p.m.; and Musto’s Later the Same Evening, performed in Colorado Springs on July 28, at the Pikes Peak Arts Center, Studio Bee, at 7 p.m., the Denver Art Museum on July 30, at 8 p.m., and in Central City on August 5, at the Gilman Studio in the Lanny and Sharon Martin Foundry Rehearsal Center, at 7 p.m. For tickets and information on all of the festival offerings, visit www.centralcityopera.org or call the box office at 303-292-6700, between 10 a.m. and 4 p.m., Monday through Friday.
Performances
2:30 p.m.: July 30; August 3, 5, and 7
Tickets and Information

Festival show tickets range from $31 to $108, based on availability. Subscribers who purchase both Central City Opera House shows can save up to 25%, along with additional and more exclusive opportunities. One-act opera tickets start at $34 ($31 for subscribers), and group discounts are available for ten or more people. All prices are subject to change, based on availability. For more information and to purchase tickets, visit www.centralcityopera.org or call the box office, 303-292-6700, between 10 a.m. and 4 p.m., Monday through Friday.