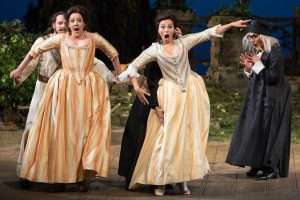 Central City Opera continues its 2017 summer festival with the opening of a new production of Così fan tutte, Mozart’s comedic opera about love, deceit, and fidelity, which runs in repertory in the Central City Opera House from July 15 through August 4.

“Our new production of Così underscores the opera’s subtitle, ‘The School for Lovers,’ and is set at an elite university in the early 1900s, when women were becoming more independent and less subservient to men,” said Pelham (Pat) Pearce, general and artistic director of Central City Opera. “It’s an interesting time period that works to enhance the themes and storytelling for Così.”
Mozart’s Così fan tutte, composed with librettist Lorenzo Da Ponte, premiered in Vienna in 1790. With its light yet lesson-learning tale, the opera, performed in Italian, focuses on two sisters, their betrothed, and a bet devised by an older cynical gentleman and a conspiring maidservant that tests the faithfulness of the two sisters. The score showcases these six principal singers in some of Mozart’s most carefully crafted and exquisite arias, duets, and ensembles.

“There is a section in the finale of act one, in the minor mode, which sounds almost spooky or foreboding, and which one might not expect in a comedic opera, but it’s there and it perfectly communicates the current mood of the situation,” said John Baril, music director for Central City Opera, who will be conducting Così fan tutte. “And it shows, among other things, that Mozart didn’t pull any punches when it came to comedy or lighter fare. It is as dramatic as anything he ever wrote in any of his absolute music or the serious operas.”

Last performed in Central City in 1990, this new production of Così fan tutte is directed by London-based Stephen Barlow, making his company debut, with set designs by Andrew Edwards. Soprano Hailey Clark makes her company debut as Fiordiligi, one of the two sisters, and mezzo-soprano Tamara Gura, who sang the role of Cherubino in Le nozze di Figaro (2014) is the other sister, Dorabella. Singing the roles of the fiancés are Matthew Plenk (tenor), who makes his company debut as Ferrando, and David Adam Moore (baritone), who makes his principal role debut as Guglielmo. Megan Marino (mezzo-soprano) makes her company debut as the sisters’ maid Despina, and Patrick Carfizzi (bass-baritone), who sang Dr. Bartolo in Il barbiere di Siviglia (2013), is Don Alfonso, the gentleman who wages the bet.
“The most exciting thing to me about Così is that Central City Opera is finally producing it after an absence of 27 years,” said Baril. “I think if there’s any opera that’s perfect for our jewel box theatre, it has got to be Così fan tutte. It’s a wonderful cast that we have carefully assembled, and I can’t wait to make music with them.”

Festival tickets range from $31 to $108, based on availability. Subscribers who purchase both Central City Opera mainstage operas save 20% off regular ticket prices and receive additional and more exclusive opportunities. One-act opera tickets start at $25 ($22 for subscribers), and group discounts are available for ten or more people. All prices are subject to change, based on availability. For more information and to purchase tickets, visit www.centralcityopera.org or call the box office, 303-292-6700, between 10 a.m. and 4 p.m., Monday through Friday.
About Central City Opera—Celebrating Its 85th Season
Founded in 1932, Central City Opera is the fifth oldest professional opera company in the country and is renowned for its exquisite world-class productions, competitive and robust young artist training program, and creative educational and community engagement activities. Its summer festival, only 35 miles west of Denver, takes place at 8,500 feet above sea level in the Colorado mountain town of Central City, where the company owns and maintains 28 Victorian-era properties, including the intimate 550-seat jewel box opera house built in 1878. For information, visit CentralCityOpera.org  or call
303-292-6500.