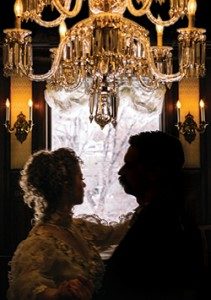 “The Ballad of Baby Doe” July 9 through August 6

Central City Opera opens its 2016 summer festival with Douglas Moore’s The Ballad of Baby Doe, running in repertory from July 9 through August 6, in the historic 550-seat opera house in Central City.

“We are always thrilled to bring Baby Doe home, said Pelham (Pat) Pearce, general and artistic director of Central City Opera, now in his 20th season with the company. “While we’ve produced this opera many times here, this summer’s production is so fresh and compelling that you’ll not want to miss it,” said Pearce. “Most exciting is the exquisite lighting and scene projections of actual locations in Colorado, including images of the cabin at the Matchless Mine in Leadville, where Baby Doe spent her final days.”
Set in Leadville, Colorado, during the mining days of the late 1800s, The Ballad of Baby Doe, written and performed in English, is based on the tragic love triangle of Colorado silver baron Horace Tabor, his wife Augusta, and a woman who once lived in Central City, Mrs. Elizabeth “Baby” Doe. Central City Opera commissioned and premiered the opera in 1956 and last performed it in 2006.
“The thing I love most about what we are doing with this production is focusing on the human story,” said Timothy Myers, conducting The Ballad of Baby Doe for his first time. “Pieces like Baby Doe can easily come across as what I call a ‘docu-opera,’ so I love that we are focusing on the relationships of the characters and bringing the music to life from a very organic place.”

“Our audience will find Moore’s score immediately accessible and exceptionally melodic,” said Myers. “After hearing soaring, emotional arias to chorus numbers that verge on Broadway style, people will leave the theatre with some great American music in their memory.”
The Central City Opera 2016 Summer Festival continues with Puccini’s powerful and passionate thriller, Tosca, opening July 16 and running through August 7. Complementing the two mainstage operas—The Ballad of Baby Doe and Tosca—are two one-act operas: Mozart’s The Impresario performed in Central City on July 27 and August 3 at noon, at the Williams Stables Theater, and in Boulder on July 28, at The Nomad Playhouse, at 6 p.m. and 8 p.m.; and Musto’s Later the Same Evening, performed in Colorado Springs on July 28, at the Pikes Peak Arts Center, Studio Bee, at 7 p.m., the Denver Art Museum on July 30, at 8 p.m., and in Central City on August 5, at the Gilman Studio in the Lanny and Sharon Martin Foundry Rehearsal Center, at 7 p.m. For tickets and information on all of the festival offerings, visit www.centralcityopera.org or call the box office at 303-292-6700, between 10 a.m. and 4 p.m., Monday through Friday.
Performances
8 p.m.: July 9, 29; August 2, 6
2:30 p.m.: July 13, 15, 17, 19, 21, 23, 27, 31; August 4

Boomer Bus—Transportation, Lunch, and Exclusive Opera Information
(July 19 and July 23, The Ballad of Baby Doe; July 26, Tosca)
This special-event package includes a glass of champagne, exclusive insider experiences, a boxed lunch in the gardens, and a Short Works performance. Patrons board the bus in Denver at 10:00 a.m. at Sports Authority in Glendale and 10:30 a.m. at Simms Steakhouse off of 6th Ave. The return bus ride to Denver includes a question-answer session with a member of CCO’s Education and Community Engagement team. Tickets are $35. Visit www.centralcityopera.org/visit/opera-bus for additional information.
Opera Bus—Transportation from Denver (July 13, 17, 20, and 24)
Roundtrip bus rides to Central City to attend operas, activities, and other events are $20 and leave Denver at 10:00 a.m. from Sports Authority in Glendale and 10:30 a.m. from Simms Steakhouse off of 6th Ave. Visit www.centralcityopera.org/visit/opera-bus for additional information.

Afternoon at the Opera—Lunch and a Closer Look at The Ballad of Baby Doe, (July 19, 11:15 a.m.)
Presented by the Central City Opera Guild, this unique experience includes a special lunch with an in-depth presentation about the opera, its historical setting, and furnishings once owned by Baby Doe and Horace Tabor. Catered lunch begins at 11:45 a.m. in the Teller House. Tickets for this afternoon event are $30. For all details, visit www.centralcityopera.org/event/afternoon-at-the-opera.
Nina Odescalchi Kelly Family Matinee, The Ballad of Baby Doe (August 2 at 2:30 p.m.)
This special family matinee performance of The Ballad of Baby Doe at the Central City Opera House provides a great introduction for kids, families, and adults looking for an educational approach to the opera experience. The matinee performance includes a narrator’s preview and an autograph session with the singers following the performance. Tickets are $20. Prices are subject to change, based on availability.

Festival show tickets range from $31 to $108, based on availability. Subscribers who purchase both Central City Opera House shows can save up to 25%, along with additional and more exclusive opportunities. One-act opera tickets start at $34 ($31 for subscribers), and group discounts are available for ten or more people. All prices are subject to change, based on availability. For more information and to purchase tickets, visit www.centralcityopera.org or call the box office, 303-292-6700, between 10 a.m. and 4 p.m., Monday through Friday.

END_OF_DOCUMENT_TOKEN_TO_BE_REPLACED

Benefitting the county, schools, and much more By Don Ireland   This year marks the 30th anniversary of casinos opening in the former little mining towns of Black Hawk, Central City and Cripple Creek, Colorado. In those early years, smoking was allowed inside ... END_OF_DOCUMENT_TOKEN_TO_BE_REPLACED