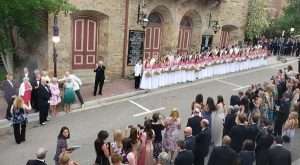 For 87 years Denver’s finest young women have been introduced to proper society in the garden between the Central City Opera House and the Teller House. About 25 juniors and/or senior high school young ladies are selected each year to be Flower Girls for the opening of the Central City Opera Summer Festival.

2019 debutants made their initial social appearance, descending the stone stairs of the garden in bloom, as the other nearly nine decades of young ladies have also been presented to society. These Flower Girls are robed in pink halter dresses with wide waist bands and flowing long white skirts, carrying their basket of nosegays. With lacy wrist-length gloves and long flowing hair, these Flower Girls are introduced, naming their parents and grandparents. They are then escorted by a dashing young man in a white suit, (often a family member or friend) to the presentation stage. Many of 2019 Flower Girls are siblings of former Flower Girls and are second or third generation Flower Girls.

Formal presentation to a future promising the promotion and participation in the arts of our culture is an honor for these young ladies and their families. Encouraging arts study and participation, philanthropy, and appreciation of refined creative beauty is part of the annual selection process for the Flower Girls. Over 50 women comprise the Yellow Rose Ball Committee, who present their selected Flower Girls at a tea in the previous fall at the Governor’s Mansion.

To open the Central City Opera 2019 Summer Festival, the Yellow Rose Ball Committee and Flower Girls have prepared patiently for June 29, 2019 to kick-off this summer’s festival of opera events. Much preparation and sharing of the anticipation goes into this with pre-parties, waltz practice, dress fittings, and elegant invitations for the private part of the event (opera and dinner) along with making the nosegays.

The 2019 Central City Opera Summer Festival is held for four weeks this year, from July 6 – August 6.  As last week’s article “Experience the Unforgettable” explains, the historic Opera House thrives during this time of year. Central City Opera House is the 5th longest running opera house in the United States. The community has always participated in the Opening of the Opera season with many happy memories of parades, and festive celebrations.

The tradition of a Central City Opera summer festival began in 1932. So, also, began a tradition of the Yellow Rose Ball and Flower Girls. Although the Central City Opera House had been built in 1878 to present entertainment and high society culture, the decline of mining by the time of the Great Depression after World War I left the building and options for entertainment also in decline.

In its original elegance, the refined miners from Cornwall, England who brought their undergrounding mining experience to Colorado, also brought their Harrison roses which bloom masses of lovely yellow roses in late June and early July at these high altitudes. Their appreciation of sophisticated entertainment also prompted the need for the Central City Opera House, the finest of its time between Chicago and San Francisco.

Not all miners were from England, so the many nationalities of eager gold seekers brought every kind of person to the Colorado Gold Rush. Earlier in June, the celebration of Lou Bunch Day hints at some of the other interests of local miners. To show gratitude for the shows, coins were often tossed on the Central City Opera House stage during the curtain call.

In 1932, Anne Evans (daughter of Colorado Governor Evans) and Ida Kruse McFarlane (University of Denver Professor) teamed up to arrange the securing of the Central City Opera House for the purpose of refined stage presentation of operas. Anne Evans had been trained in the arts Paris and Berlin. She had seen nosegays tossed on stage in Austria, so brought the tradition to Central City. Two local girls just 13 and 14 years old were the first Flower Girls to make nosegays (small fragrant flower arrangements) to toss on the Opera stage during curtain calls reminiscent of the miner’s coins appreciation.

Kicking off the season

The schedule of events open to the public, Saturday, June 29th began with the closing of the Eureka Street in front of the Opera House at 3:45 p.m. Cocktails were served at 4 p.m., followed at 5 p.m. by the traditional dynamite blast and presentation of the Flower Girls by J. Landis Martin. The official opening of the 2019 Central City Opera Season began at 5:45 p.m. Ushers sang instructions to guests and opened the doors.

The Yellow Rose Waltz took place in the street to music specially arranged by the Central City Opera. It started with Flower Girls being escorted to their fathers to waltz, followed by escorts bringing the mother to the father to waltz, and finally everyone was waltzing – Flower Girls with escorts, parents, and grandparents.

At 6 p.m., invited guests entered the Opera House having been presented with nosegays by their Flower Girl, and Eureka Street was re-opened to automobile traffic. Dinner and dancing followed from 7-11 p.m.

This delightful tradition sets young women on a path of artistic participation and appreciation. Dancing with their father as their first formal social event allows them to enjoy classical rhythm with grace and poise. Central City is steeped in rich culture!

END_OF_DOCUMENT_TOKEN_TO_BE_REPLACED

Benefitting the county, schools, and much more By Don Ireland   This year marks the 30th anniversary of casinos opening in the former little mining towns of Black Hawk, Central City and Cripple Creek, Colorado. In those early years, smoking was allowed inside ... END_OF_DOCUMENT_TOKEN_TO_BE_REPLACED