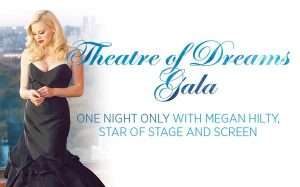 It’s the best musical night out of the season! Central City Opera hosts the annual Theatre of Dreams Gala on Friday, April 26, 2019 at 6:30 pm in the stunning Hangar at Stanley Marketplace in Aurora. Located beside the runway on the site of Denver’s original airport, the retrofitted Hangar mixes nostalgia with rejuvenation—a perfect complement to the fifth oldest opera company in the United States.
The elegant evening will showcase the talents of Tony-nominated Broadway and TV star Megan Hilty, a Washington native who rose to prominence through powerhouse performances as Glinda in Wicked, Doralee Rhodes in 9 to 5 and Brooke Ashton in Noises Off. Hilty also starred in NBC’s hit series TV Smash, which was nominated for a Golden Globe Award for Outstanding Musical or Comedy Series. She has guest-starred on Project Runway, Difficult People, Brain Dead and The Good Wife and released two albums: Megan Hilty Live at the Café Carlyle and A Merry Little Christmas. Regularly performing with symphony orchestras throughout the United States and in solo concert at smaller venues, Hilty’s appearance at the Theatre of Dreams Gala promises to be an electrifying and crowd-pleasing experience.

As guests mix and mingle at their tables or one of several cocktail bars, a selection of fine wines and gourmet cuisine will satiate the most discerning palate. Inventive beverages and alluring sweets provide an extra dose of fun. The black tie event will culminate with late night dancing under a canopy of twinkling lights.
Gala attendees will have the exclusive opportunity to bid on 2019 LIVE Auction Dream Events, a popular fixture of Central City Opera’s year-long special engagements throughout Denver and along the front-range. The Dream Events offer patrons behind-the-scenes access to select locations and once-in-a-lifetime experiences, including exclusive dinners, tours, cocktail offerings, wine tours, private lectures and more.
The Stanley Marketplace is located at 2501 Dallas St, Aurora, CO 80010. For more information on this enchanting evening, visit Theatre of Dreams Gala.
Tickets and Sponsorships
Theatre of Dreams Gala tickets are $350 per person and Young Professionals (ages 21-40) can purchase tickets for $150. To become a sponsor, contact Central City Opera Events Coordinator Jeremy Schwartz at 303.331.7012 or send an email to rsvp@centralcityopera.org.

Central City Opera’s 2019 Festival will open on July 6 with main stage productions of Benjamin Britten’s Billy Budd (Colorado premiere) and Giacomo Puccini’s Madama Butterfly. Both world-class performances will be brought to life in the historic 550-seat jewel box opera house in Central City. Additional works include a double bill of The Blessed Damozel by Claude Debussy and Litanies to the Black Virgin by Francis Poulenc. These enchanting, rarely performed works showcase singers of the acclaimed Bonfils-Stanton Artists Training Program. And for two nights only, Central City trades cabaletta for cabaret with the performance of Encore: A Musical Review, curated by Curt Olds and conducted by John Baril.

END_OF_DOCUMENT_TOKEN_TO_BE_REPLACED

Where the dead get to tell their story By Jaclyn Schrock On Saturday, August 21, the Gilpin Historical Society held their annual Cemetery Crawl. Tickets allowed the shuttle of hundreds of guests from the Teller House parking lot to the Cemetery. Depending on v... END_OF_DOCUMENT_TOKEN_TO_BE_REPLACED