Central City Opera Inside Out 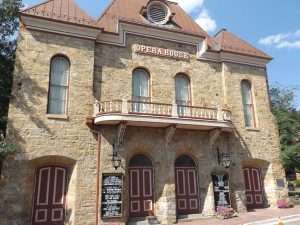 One of the most interesting historical gems resides right here in our own backyard. Most of us drive up and down Eureka Street in Central City without realizing the importance of this landmark. It is the Central City Opera House.

Opera Inside Out tours are available, on certain dates that allow the visitor to peak into the backstage world of the opera, Central City Opera House Director of Education Deborah Morrow led our small group around the complex to meet and talk to some of the folks that keep the shows on track, and to gain some knowledge about the history of the Central City Opera.

Central City’s first real theater, The Montana, was built in 1862. It burned to the ground in the devastating fire that swept through the town in 1874. The Belvidere Theatre was then built of brick to alleviate the possibility of fire, but it had seating for only 150 entertainment seekers. Residents of Gilpin County felt they need an even larger theater: an opera house, with all the grandeur that the name implies.

According to the book Theater of Dreams, Central City residents raised $12,000 and hired noted Denver architect Robert Roeschlaub to design the most luxurious theater between Chicago and San Francisco complete with ornate ceilings frescos, an elegant gaslight chandelier, and seating for 750. One unique tidbit of information that Ms. Morrow shared is that the Opera House was totally funded and built by the citizens of Central City and surrounding areas. The grand opening of the Central City Opera House in March of 1878 was cause for much celebration. All the hard work and fund raising came to fruition. However, in just three years afterwards, fortunes dried up, folks left Gilpin County for greener pastures, and the Opera House was not able to pay its debts. By 1890 the theater was in such despair, that it was rumored to be unsafe. Local businessman and civic leader Peter McFarlane took over management of the theater and took it upon himself to keep the theater operating; often paying for repairs and upgrades out of his own pocket. McFarlane’s wife, Ida Kruse McFarlane, teamed up with Anne Evans, daughter of Governor John Evans, and formed the Central City Opera House Association in 1931 along with The University of Denver. “All they had to start with was a deserted theater, a dream, and determination.” A second grand opening took place on July 16, 1932 with the production of Camille, and the Central City Play Festival has run every summer since, with the exception 1942 to 1945 during WWII.

As the tour group worked its way through the narrow hallways, our first stop was the wig and make-up department. There Ronell Oliveri explains that June is the month they have to prepare. Some of the principle actors get a custom wig fabricated for their part. The wigs are made on site with real human hair in which each follicle of hair is attached by hand that’s known in the biz as ventilating. The wigs are light weight and have characteristics all their own. For instance the character Azucena in the play IL Trovatore is a balding woman played by Lindsay Ammann. The wig is designed and created with the scalp showing through the hair to give that same balding appearance. After each performance the wigs are washed, conditioned and styled for the next show. Ms. Oliveri explains,” We also do the make-up in this room. The three of us usually have about twenty minutes to make up each of the principle actors including eyelashes. The chorus and extras are made up across the hall by the interns. This is a very busy area before each show that focuses on the silent heroes of the opera stage. If the audience doesn’t notice anything unusual or out of place, we’ve done our job.”

With the hum of clothes dryer in the background, Costume Shop Manager Stacie Logue explains the role of the costume shop. “This shop provides costumes and services for both shows plus the Short works at the Williams Stables across the street.” Some of the costumes are made in the wardroom area, some are rented from warehouses across the U.S and Europe, and some are pulled from the storage room on site. Ms. Logue continues “We provide initial fittings and alterations before the shows, assist the actors during the show, and repair and clean the costumes after the show.” Each show has what Ms. Logue calls a costume bible. It contains every little detail on the costumes for the different shows such as the original designer sketches, swatches of the fabric, and even where the fabric was purchased along with the costs. She shared stories about wardrobe malfunctions and failures in the past and how she dealt with them. Ms. Logue works out of Santa Barbara, California, but works shows all across the U.S. She compares her role to a sculpture where she takes a two dimensional piece of fabric and makes it into something that is three dimensional that is functional and durable. Ms. Logue concludes. “This is a very deadline oriented business and that’s not for the faint of heart.” As we toured the empty dressing room area, one opera star was found sleeping in the corner of Will Livermore’s dressing room. The cast and crew know him as “Side Eye,” but to the rest of us he’s known as Papageno’s ostrich from The Magic Flute. When Side Eye is not summering in Colorado, he spends most of his time in London. All of The Magic Flute costumes are rented from Angel’s Costumes, London, U.K.

The last stop is where it all comes together, the stage area. Here a show set change was taking place as the crew was in the process of “striking” or tearing done the set from IL Trovatore and setting up for the next performance of The Magic Flute. Looking into the orchestra pit, Ms. Morrow explains that Eureka Creek runs through a culvert directly under the stage and pit of the theater. The original artwork in the theater area was done by artist John Massman from San Francisco painted in 1878. It is of Trompe-l’oeil design, meaning even though it is flat, it appears to be three dimensional. The ceiling has been all been restored because it was painted on plaster and during those years between 1920’s and 1930’s when the building was neglected the plaster became week and unstable. In 1984 during a performance, part of the ceiling fell and slightly injured an opera goer in the balcony. Soon thereafter, the original design was duplicated onto a canvas and glued to the ceiling. If the roof leaks the canvas is peeled back, repairs made, and the canvas is then reattached. That makes for easy maintenance, looks original, and there are no unexpected surprises for opera fans. Sounds like a win-win situation. Ms. Morrow also explained that the original opera seats were lost or sold sometime in the past, so to provide seating for the reopening in 1932, hickory chairs were purchased and wired together to provide as a fix for the missing seats. In 2000, the Opera Association removed those chairs and installed the nice cushioned seats that are currently in place. This improvement reduced the seating from 750 to 550.

The conversation then turned to the subject of ghosts in the theater. Ms. Morrow revealed the she has heard that there are ghosts in this house, but she has never seen one. Other members of the cast and crew are convinced that there are definitely ghosts here. Stagehand Jim Moynihan pointed out a small door behind the conductor that opens up to a storage area under the seats. Mr. Moynihan explains, “In there you can hear the stream running in the culvert, it is always damp and always musty smelling and we always think we’re going to see a ghost or something strange, but so far that has not happened.” Jim also runs the spot lights or spots during the show. The area where the spots are operated are so cramped that the operator has to crawl to the operators position and dangle his legs over the edge of the balcony for the entire show.

The historical Central City Opera House “Inside Out” tour is truly a must see for locals as well as visitors to Gilpin County. Even though the backstage folks were preparing for a matinee performance later that afternoon, they were all willing to take time out of their busy schedule to explain their contributions to the success of the opera. At the end of the tour, Ms. Morrow announced that half price tickets were available to ticket holders of Opera Inside Out. The last Opera Inside Out tour of the 2018 season will be available on August 2, 2018 for a matinee performance of The Magic Flute. For more on this and other opportunities to visit the opera, visit them online at www.centralcityopera.org.

END_OF_DOCUMENT_TOKEN_TO_BE_REPLACED

Benefitting the county, schools, and much more By Don Ireland   This year marks the 30th anniversary of casinos opening in the former little mining towns of Black Hawk, Central City and Cripple Creek, Colorado. In those early years, smoking was allowed inside ... END_OF_DOCUMENT_TOKEN_TO_BE_REPLACED