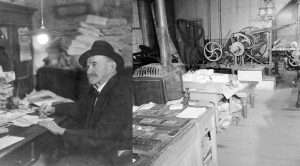 According to A Concise Social and Business Review of the Three Principal Towns in Gilpin County compiled by The Colorado Information and Advertising Bureau (in 1901):   “By act of the Territorial Legislature, approved November 1, 1861, the county seat of Gilpin county was located at Central City. When the county was divided into precincts for general election and county purposes, the Central City precinct was subdivided for municipal purposes and city elections into three wards, each controlling the choice of local officers and having a voice in the common council of the city presided over by the mayor.

The Town Site Act of Congress in 1844 had authorized 1,280 acres to be located and patented, for such purposes, where there were 1,000 or more inhabitants. Central City therefore applied for and received patent for 629 acres.

The most important portion of the land upon which Central City now stands was, by the first comers, turned topsy-turvy, and but little attention paid to street alignment or plans.

The great fire of May 21, 1874, swept the gulches from end to end, and left Central City a mass of smoldering ruins and a loser to the extent of over three-quarters of a million dollars.

No time was lost by the citizens after this great calamity in vain regrets, but work was at once started to rebuild, and in a short time new buildings were erected, new enterprises started, and Central City became what it is today, a city of stately business blocks, of magnificent churches, substantial school houses and populated with energetic, happy and prosperous people who never fail to extend the right hand of fellowship to the tourist or emigrant who may seek shelter within her hospitable boundaries. The town has grown and is still on the increase and not a whit of its old time sprit has departed.

The newspaper field is well and ably covered in Central City by three weekly papers, and from all appearances, each are doing a thriving and profitable business. A spirit of good will and friendly business rivalry exists, and yet no bitter personal animosities have ever cropped out, as is so often the case with neighbors living so close to one another. We take them in alphabetical order:

The “Gilpin Observer” plant was purchased by the Observer Publishing Company June 21, 1887, the stockholders all being residents of Gilpin County, from the late A.C. Crosson, who established the Black Hawk Times in 1885. The company continued to publish it as the Times until July 27th, when it was merged into the Gilpin Observer. The directors were: James McD. Livesey, Joseph S. Beaman, and Alexander McLeod, the latter gentleman being editor, and Mr. McD. Livesey manager. After the retirement of Mr. McLeod, its publication was continued under different management until October 1898, when the present proprietor, Fritz J. Altvater, assumed the management and has since been at the helm.

The manager’s aim is to make it a local paper, making mining and milling, the industries of Gilpin County, its special features. Since passing into the hands of the present proprietor the business of the office has increased. It is now having a large circulation in Gilpin County, which makes it a very desirable advertising medium. Its regular day of publication is Thursday morning, affording ample time to reach its subscribers throughout the county by mail at noon of that day. The office contains an improved Potter newspaper press and a large-sized job press, both run by gasoline engine, and has a job office connected with it, from which is turned out job work in an up-to-date style.

The present proprietor of the Gilpin Observer, Fritz J. Altvater, is a young man of pleasing address, attractive in manner, and possesses in a marked degree the faculty of making warm friends and retaining them through life.

He was born in Central City in 1876, and attended the public schools here, and after graduating he entered the office of the Register-Call and learned the printer’s trade. Later he went to Denver and became a linotype operator on the Denver Post, which place he resigned to assume the management of the Observer.

At present he is manager of the Opera House, in addition to his position with the Observer.  The success of the Observer is due solely to the popularity of this young man. He is earnest and energetic and above all, is courteous and obliging to friends and strangers alike.

He has been successful in every venture he has undertaken, and to no one does this fact give more sincere pleasure than to the writer of this sketch, and we take pleasure in acknowledging the many courtesies extended by the proprietor and the entire Observer force during our short stay in Central City.

This firm formerly leased the Observer, and on throwing up their lease they shipped a plant from Denver and at once started the Miner.

The new venture was successful from the start and the paper has gained steadily until at the present time they have a bona fide circulation of over 700 copies each week.

The paper is run as a Democratic sheet, politically, and at the present time the senior partner, J.D. Hurd, who is a practicing attorney, is the assistant district attorney for Gilpin County.

The plant is well equipped in every respect, and their job room has a complete assortment of the latest fonts of type, and they are prepared to turn out all styles of job work.

For many courtesies extended by this firm, the writer of this work takes the present occasion to express his sincere appreciation and to wish continued success to the Miner.

This Register-Call paper enjoys the distinction of being the oldest paper in continuous circulation in Gilpin County, and the third oldest in the state of Colorado.

It was first established in 1862, and is now on its thirty-ninth volume. It is a six-column quarto, all home print, and is in every way a representative weekly paper.

It has a large circulation in the county and this section of the state, and it covers the county of Gilpin thoroughly. It has a well-equipped plant and every description of job work is done. They publish every Friday, and their subscription price is $2.50 a year in advance, or $3 if not paid until the end of the year.

G.M. Laird is the editor and sole proprietor.  He is an up-to-date newspaper man and has many friends in the county.

Approximately thirty years later, Muriel Sibell Wolle, who was a professor at the University of Colorado, and the department head of Fine Arts, visited Central City and met with Mr. Laird.  Mr. Laird explained how editing the paper was difficult work in the early days, because the wagon trains carrying supplies of paper often encountered difficulties and did not arrive. The following excerpt is from Muriel Sibell Wolle’s book, Ghost Cities of Colorado, published in 1933.

“During the first five years papers were at times printed on wrapping paper, brown, tan or gray, and were of irregular size. A shortage of paper sometimes lasted for weeks. Floods also retarded the arrival of trains with supplies, and even telegraph lines which finally brought news to the west were not free from molestation. In 1863 the Black Hawk Mining Journal states: “Our dispatches are somewhat meagre to start out on, but the late storms have played hob with the line. Not only has it been blown down in places, but emigrants have been obliged to use the poles in some instances to keep from perishing…”

The Register-Call has occupied the present office during most of its career, and much of the present printing equipment was brought across the plains in the early days—some of it by ox team. The spirit of the paper has always been refreshing and alert. In 1878, the day after the Opera House opened, is the item: “We have now the best opera house in the state, the best hotel, the best musical talent, the best mines, the best women, and if the people of Central will only give us their patronage, we will make the Call the best paper in the state.”

END_OF_DOCUMENT_TOKEN_TO_BE_REPLACED

Benefitting the county, schools, and much more By Don Ireland   This year marks the 30th anniversary of casinos opening in the former little mining towns of Black Hawk, Central City and Cripple Creek, Colorado. In those early years, smoking was allowed inside ... END_OF_DOCUMENT_TOKEN_TO_BE_REPLACED

Where the dead get to tell their story By Jaclyn Schrock On Saturday, August 21, the Gilpin Historical Society held their annual Cemetery Crawl. Tickets allowed the shuttle of hundreds of guests from the Teller House parking lot to the Cemetery. Depending on v... END_OF_DOCUMENT_TOKEN_TO_BE_REPLACED