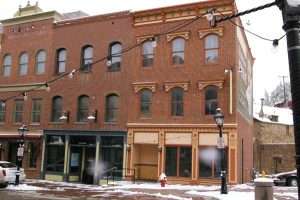 Council and Staff met with the Business Improvement District for a work session prior to the regular meeting on Tuesday, May 4, 2021.

The Mayor called for a motion to approve the consent agenda which consisted of the minutes from the April 20 meeting and regular bill lists through April 20. Alderwoman Tinucci noted that they switched nurseries for supplying flowers for the City, and Manager Miera commented that they switched due to availability and pricing and continuing to keep their costs low.

Mayor Fey asked what budget line item the $20,000 expense for new media equipment will go towards, and Manager Miera responded that this has been in the budget for a couple years. Alderwoman Laratta moved to approve the Consent Agenda and was seconded by Alderman Aiken. The motion passed unanimously.

Mayor Fey opened the floor to the public for anyone who wished to speak to a topic on the evening’s agenda. No one chose to address council.

Council considered action on one Ordinance.

Director Rears reviewed the second reading of Ordinance 21-03 which would approve a lease agreement with purchase option with SPRT Entertainment, LLC for the property at 130 Main Street formerly and commonly known as Scarlets. Once approved, the Mayor and the Mayor pro-Tempore are given authority to approve the final agreement. SPRT Entertainment has until May 1, 2022 to install the first gaming device (can be extended 180 days with good cause). The purchase price would be $1,940,000; after optional credits applied, can be lowered to only $1,360,000. The lease agreement will expire upon sale or December 31, 2023, whichever comes first.

Bil (Ming Chung) Liu, SPRT Entertainment, expressed his regrets that he could not be there in person as he is in Georgia under a monsoon warning, but will “take a rain check” and looks forward to meeting them in person.

Mayor Fey opened the public forum for Ordinance 21-03 and no one chose to address council.

Alderwoman Laratta moved to approve Ordinance 21-03 and was seconded by Alderwoman Johnson. Alderwoman Laratta commented, “I’m totally excited, I can’t wait, I’m almost speechless over this deal!” Alderman Aiken commented he is looking forward to meeting Bil Liu. Mayor Fey inquired of counsel what level of adjustments are acceptable between first and second readings of an Ordinance. Attorney McAskin reviewed the changes; the ability to extend deadlines and adjusted the down payment amount option. He assured that Council has the option to continue the motion if they need more time to consider the changes. The Ordinance passed unanimously.

The Council considered approval for one Resolution, and one Promise Program request.

The City received a request for the Promise Program from Blake Boulter in the amount of $5,000. The Promise Program is a grant given to Central City students in continuing education with a limit of $20,000 over four years. This request is the first request for the 2021 fiscal year and the City has a total budget of $20,000 (four applicants). Blake is a first-time applicant for the Promise Program and has been accepted at the Colorado School of Mines starting this fall. Blake holds a cumulative GPA of 4.13 at Gilpin County School, is currently ranked 2nd in his class, and supplied letters of recommendation from the school principal, Alexis Donaldson, and the Regional Operations Director of Circle K (and school board member) Craig Holmes. Blake plans to major in chemical engineering. Since Blake has not graduated for a few more weeks, approval will be conditional upon proof of his diploma.

Alderman Aiken moved to approve the request of $5,000 for the Promise Program and was seconded by Alderwoman Tinucci. Alderwoman Laratta commented, “He is a great candidate and a great guy.” Alderwoman Johnson commented, “Kudos to the parents and awesome for him; mind-blowing.” Mayor Fey commented, “He is an outstanding boy and has a wonderful demeanor.” The motion passed unanimously.

Slap Some Paint on It

Historic Preservation and Code Enforcement Officer Lindsey Flewelling introduced Resolution 21-12 which would approve the City of Central Historic Preservation Paint Reimbursement Grant Program of 2021. The program will reimburse up to 50% or $2,000 (whichever is less) of the cost of a certified contractor to paint the exterior of an historic residence as determined by the National Historic Land District within the City Limits. The program is a first come, first served program and has a total budget of $25,000 for the year.

To be eligible, your residence must be structurally sound, colors must follow the City’s design guidelines, work cannot be started, but you must supply copies of bids from contractors, and applications must be complete.

There will be three rounds of application deadlines; on June 1, July 1, and August 1, or until grant funds are exhausted, whichever comes first. The Historic Preservation Commission will review applications for approval at their regular meetings. They will meet on June 9, July 14, and August 11. Additional rules and conditions can be found posted on the City’s website

Alderwoman Laratta moved to approve Resolution 21-12 and was seconded by Alderwoman Johnson. Flewelling commented that a notice will go out in the June water bill along with some social media announcements and post notices at the Post Office and City Hall. The Resolution passed unanimously.

Manager Miera informed that the CDPHE will be awarding the City of Central with a Drinking Water Compliance Award. This award recognizes long-standing compliance with the drinking water act.

Laratta – “I met Steve Boulter” in 1991 as he was talking to people about gaming coming up to Central City. “I painted stairs and moved furniture” in one of the first casinos. She then decided to get a house, so she didn’t have to drive up from the Denver metro area. It evolved into one of the best jobs she ever had, and she put her son through college without a student loan. “I’m here to say that the gaming industry is marvelous, and it saved this city. God bless America!”

Mayor Fey adjourned the regular meeting at 8:20 pm. The next regular Council Meeting will be Tuesday, May 18, 2021.

END_OF_DOCUMENT_TOKEN_TO_BE_REPLACED

Benefitting the county, schools, and much more By Don Ireland   This year marks the 30th anniversary of casinos opening in the former little mining towns of Black Hawk, Central City and Cripple Creek, Colorado. In those early years, smoking was allowed inside ... END_OF_DOCUMENT_TOKEN_TO_BE_REPLACED